Electronics retailer JB Hi-Fi has experienced a massive boost to sales for the third quarter of the financial year as remote working fast becomes the norm across Australian workplaces. 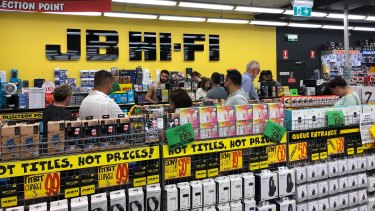 JB Hi-Fi has seen a huge jump in third-quarter sales as shoppers rush to kit out their home offices.Credit:Patrick Durkin

Sales had been tracking well throughout January, however the company noted it had seen an "acceleration in recent weeks" as customers prepare for COVID-19, buying "products that enable remote working, learning and communication".

Millions of Australian workers who would usually operate from office buildings have been sent to work from home by their companies over fear office environments could exacerbate the spread of the coronavirus.

This has included major employers such as Australia's big four banks and telecommunications provider Telstra, which two weeks ago directed its 20,000 employees to work remotely.

JB Hi-Fi's whitegoods division The Good Guys also recorded a lift in sales, up 10.4 per cent thanks to a panic buying induced run on "home appliances for food storage and preparation".

However, the company's 14 New Zealand stores did not see the same jump, falling 2 per cent for the quarter.

Despite these bumper results, the continued uncertainty over the virus prompted the retailer to join the ranks of companies pulling full-year guidance. The company said its balance sheet remained strong, and there was "significant headroom" in its covenants.

JB Hi-Fi is also encouraging social distancing in its stores, along with additional intensive cleaning and customer traffic management to reduce congestion in light of the virus. 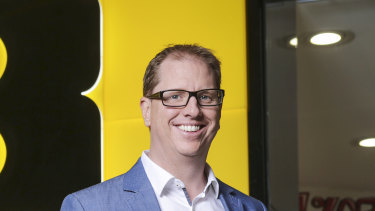 The good news was not enough to push the retailer's share price into the green, plummeting 16.6 per cent to $23 after market open, in line with a broader decline.

Discount retailer The Reject Shop also reported a jump in sales for the third quarter, with the company telling investors on Monday morning it had continued its bumper run of sales growth with panic buying Australians contributing to a massive 36.1 per cent jump in comparable sales over the last week.

This follows on from the company’s similarly large 15.1 per cent comparable sales increase between February 24 and March 15, as huge numbers of shoppers flock to stores, desperate for toilet paper, hand sanitiser, and other in-demand supplies.

Comparable sales for the whole quarter are currently tracking at 8.2 per cent, the company said, with chief executive Andre Reich saying they were "extraordinary times".

"In these extraordinary times, The Reject Shop will continue to serve all Australians through providing access to essential grocery and household products at everyday low prices while doing everything we can to keep our customers and our team safe and healthy," he said.