New York (CNN Business)Former President Donald Trump on Wednesday filed class-action lawsuits targeting Facebook and its CEO Mark Zuckerberg and Twitter and its CEO Jack Dorsey, as well as YouTube and its parent company’s CEO Sundar Pichai, in a Hail Mary move after being removed from their platforms. Courts have typically dismissed similar suits, and these are likely doomed from the start as well.

The announcement about the lawsuits comes after the companies removed Trump’s access to their platforms in the aftermath of the January 6 riot on Capitol Hill. Twitter banned Trump altogether, and he is currently suspended from Facebook for at least two years. YouTube also suspended Trump in January, but it said in March that his account would be reinstated when the company is confident that the risk of violence has receded.
Twitter (TWTR), Facebook (FB) and Google (GOOGL), which owns YouTube, declined to comment.

Tech companies have consistently rejected claims that their platforms discriminate based on partisan ideology. Independent studies have not corroborated such accusations, and several have found that partisan voices, particularly on the right, are among the most engaged-with on the platforms.

Trump’s suits continue a trend that began during his presidency: Throwing the book against companies he perceives to be a threat to his political brand. Last spring, while he was still in office, Trump signed an executive order aimed at “preventing online censorship” and seeking to expand legal liability for tech companies.

But the tech companies are legally permitted to run their platforms as they see fit, and courts have dismissed a string of similar lawsuits. Facebook, Twitter and YouTube all cited the potential for future incitement of violence or risks to public safety following the Capitol riot in announcing their decisions to remove Trump’s accounts.
Trump said during a press conference Wednesday that he is asking a court in Florida “to order an immediate halt to social media companies’ illegal, shameful censorship of the American people.”
“We’re going to hold big tech very accountable,” he said. 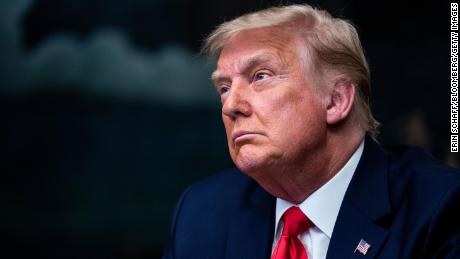 The push to bring legal action against tech platforms over bias allegations has spread nationwide. In May, Florida passed a law allowing politicians that have been suspended or removed from social media to sue those companies.
But the effort has run up against the realities of current law — and the Constitution. Last week, a federal judge blocked Florida’s law from going into effect, saying government attempts to force social media companies to host political speech violates the First Amendment. (Florida Gov. Ron DeSantis has vowed to appeal.)
The judge’s ruling also said the Florida law ran counter to a federal law Trump had sought to weaken with his executive order: Section 230 of the Communications Act of 1934. Section 230 provides legal immunity to websites that moderate user-generated content, and has been used by tech platforms to nip many lawsuits in the bud.
In Congress, numerous bills have been proposed to narrow the scope of Section 230, including by some Democrats who believe tech companies are not doing enough to curb hate speech and harassment online.
But much of the momentum for changing Section 230 has come from Republicans upset about how social media companies have enforced their rules when conservatives have broken them. Trump, in his order, accused tech companies of “engaging in selective censorship that is harming our national discourse,” and pushed for the Federal Communications Commission to “clarify” Section 230.

Legal experts and FCC officials themselves questioned the agency’s authority to do that, citing the same First Amendment issues that tied up the Florida law. President Joe Biden later rescinded Trump’s order.
Now, having failed to turn the machinery of the US government against the tech industry, Trump is trying to get at it through the courts himself. But with Section 230 still on the books, it’s unclear how he could succeed.
Source: Read Full Article