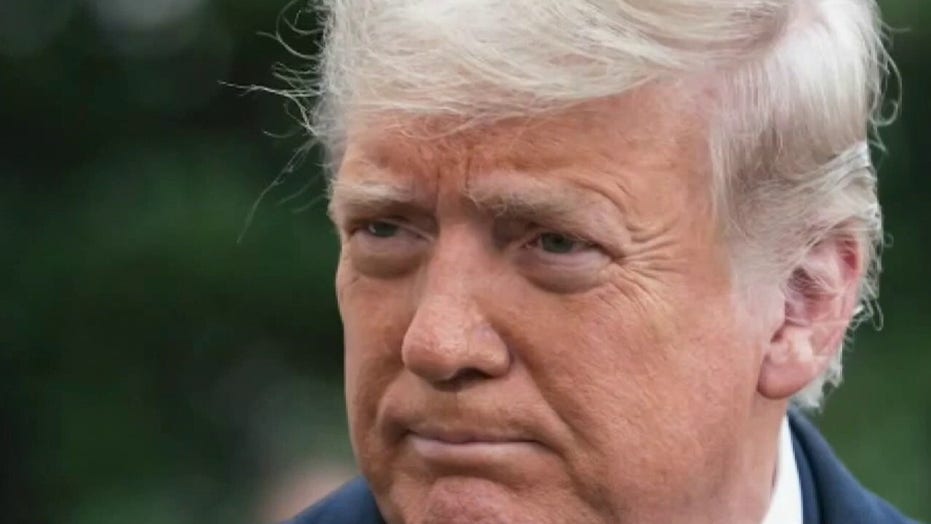 Lawyers for former President Trump on Monday submitted a brief saying that Democrats’ effort to convict the president in an impeachment trial after he’s left office is “political theater,” and that the trial is outside of the Senate’s constitutional authority.

“Instead of acting to heal the nation, or at the very least focusing on prosecuting the lawbreakers who stormed the Capitol, the Speaker of the House and her allies have tried to callously harness the chaos of the moment for their own political gain,” the brief says.

The brief also echoes arguments made in the Trump team’s initial answer to the impeachment article that Trump’s false claims that the election was stolen were within his First Amendment rights. And the brief says that Trump’s comments at the Jan. 6 rally he held ahead of Congress’ meeting to certify the result of the presidential election do not comport with Democrats’ narrative that he incited the crowd to storm the Capitol. 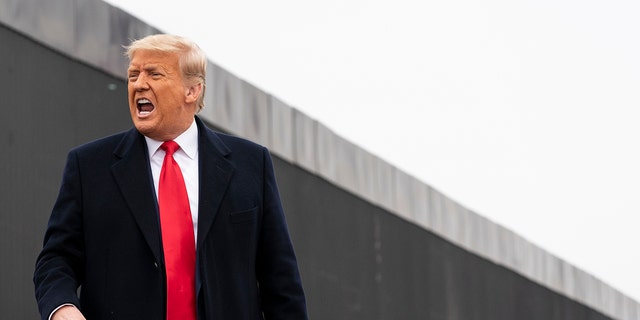 President Donald Trump reacts after speaking near a section of the U.S.-Mexico border wall, Tuesday, Jan. 12, 2021, in Alamo, Texas. Trump is the only American president to ever be impeached twice. (AP Photo/Alex Brandon)

“Mr. Trump spoke for approximately one hour and fifteen minutes. Of the over 10,000 words spoken, Mr. Trump used the word ‘fight’ a little more than a handful of times and each time in the figurative sense that has long been accepted in public discourse when urging people to stand and use their voices to be heard on matters important to them; it was not and could not be construed to encourage acts of violence,” the brief says.

It continues: “Notably absent from his speech was any reference to or encouragement of an insurrection, a riot, criminal action, or any acts of physical violence whatsoever… Mr. Trump never made any express or implied mention of weapons, the need for weapons, or anything of the sort. Instead, he simply called on those gathered to peacefully and patriotically use their voices.”

The brief comes the day before the trial is set to begin in earnest, with arguments over its constitutionality likely, and Senate President Pro Tempore Patrick Leahy, D-Vt., set to preside.

House impeachment managers, led by Rep. Jamie Raskin, D-Md., are also expected to file a brief of their own on Monday morning.

The filings from both Trump’s team and the Democrats who aim to secure the former president’s conviction will provide a preview of the arguments they plan to make during the trial hearings.

The Senate has yet to officially agree to a framework for the trial. But a potential one is currently being circulated that would allow for four hours of debate Tuesday about whether the trial is constitutional, followed by a vote on “Constitutionality.”

That the constitutionality of the trial will be a central topic is belied by the amount of time Trump’s lawyers spend on the topic in their Monday brief. The sections on the Senate’s constitutional authority consume 24 pages of the 75-page document.

“Conviction at an impeachment trial requires the possibility of a removal from office. Without that possibility, there cannot be a trial. In the civil law analogue, this case would be summarily dismissed under Federal Rules of Civil Procedure 12(b)(6), for ‘failure to state a claim upon which relief can be granted,'” Trump’s lawyers say.

They add: “This impeachment trial is being pursued solely to preclude Mr. Trump, a private citizen, from holding any future office. However… the Constitution only grants the Senate the additional power to remove a person’s right to run for office as part of the process of removal from office.”

Also notable on the Trump team’s brief is the addition of an additional lawyer from when it first filed its answer last week. Schoen was joined by just former Montgomery County, Pa., District Attorney Bruce Castor on the previous document. Now they are joined by Michael T. van der Veen, a personal injury lawyer from Philadelphia.

This is a developing story. Please check back for updates.