On March 10, more than a week before the US state of California locked down and 13 days before the UK did the same, the streets of downtown San Francisco were already empty.

Even as New York's mayor Bill de Blasio took a publicity stunt subway ride to calm his city's fears, and as packed commuter trains ferried workers to their office jobs in London, parts of the San Francisco Bay were becoming deserted. 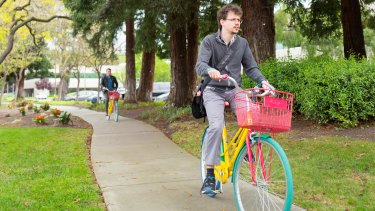 Google was one of the first big companies to take action.Credit:Alamy

Perhaps it was because the San Francisco Bay Area, a metropolitan hub perched on America's west coast, has so much travel to and from China. But it can't have hurt that one of the area's richest and influential industries – Silicon Valley – had already been steadily descending into quarantine mode for a week beforehand.

"Totally vindicated," says Stephen Shortell, a professor of health policy at the University of California, Berkeley, of the tech industry's response. "Better safe than sorry."

Microsoft, Amazon and Google were the first to lock down. In Seattle, Washington, where the first big US outbreak took place, they sent employees home on March 4. That was quickly extended to cover workers in California, with Facebook and Twitter soon following suit.

As early as February, the venture capitalist firm Andreessen Horowitz posted a sign reading: "Due to the coronavirus, no handshakes please." On March 5, Sequoia Capital sent out a startling "black swan" warning to its portfolio companies – mirroring its famous "RIP Good Times" bulletin in 2008. Of course, local government played a key role. Shortell says California and especially the Bay were "more assertive, more aggressive" than other regions.

Still, tech was faster. WeWork offices, which incubate many early tech start-ups, were deathly quiet ahead of the order to "shelter in place" on March 16. So why was Silicon Valley so much quicker to wake up than other industries?

One reason is its links to the initial outbreak. Apple, which builds its hardware and sells many iPhones in China, told its factory employees around Shenzhen to go home at the end of January. That gave other companies a clue to what was coming. Other reasons are cultural, and go deeper.

Dr Aaron Blackledge, an addiction specialist who has been seeing Silicon Valley patients for 15 years, said he began to get worried questions around the time China locked down 20 million of its citizens on January 24. Tech leaders and doctors alike, he says, regarded this decision as an "outlier". Yet he suggests that the industry's methodical, mathematical way of thinking led it to draw the only logical conclusion from this action – that things were about to become serious. 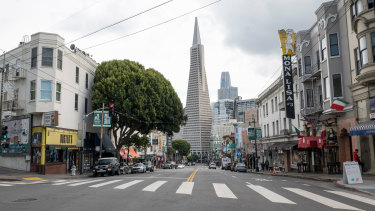 The streets of San Francisco quietened down much quicker than other major cities around the US.Credit:Bloomberg

That is echoed by Jan English-Lueck, an anthropologist at San Jose State University and author of the ethnographic study Cultures@SiliconValley. She believes tech workers' penchant for "data driven behaviour" helped them grasp the scale of the crisis – and begin acting on it – more rapidly.

"If you think about the quarantine as a technology for health, Silicon Valley was an early adopter," she says.

She cites the popularity of "self-quantification", or data-based health tracking, as well as tech culture's individualistic indifference to social convention, which might have made mask-wearing and social distancing more palatable. She also cites tech workers'"yearning to work from home", saying that "hellacious" Bay traffic, the bargaining power of well-paid coders and general tech-savviness had already established remote working as a normal practice.

The lockdowns seem to be working. From being early epicentres of the disease, Seattle and Silicon Valley now look like they may have escaped the worst. Local politicians seem cautiously optimistic, while warning that a surge could yet be on the horizon.