IGA operator Metcash will invest in a new $70 million distribution centre in Victoria after posting a 5.9 per cent growth in revenues for 2022 driven by hardware and liquor sales.

Investors in the $4 billion retailer will see an 11 cent fully franked dividend for the half, compared to 9.5 per cent at the same time last year, meaning the full-year dividend of 21.5 cents is up by 23 per cent. 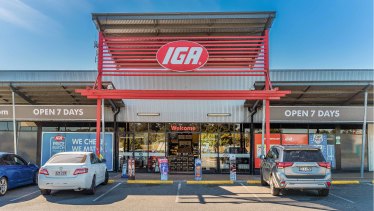 Chief executive Doug Jones said the “local neighbourhood shopping trend” helped drive the company to net profits of $245.4 million, up 2.7 per cent on 2021.

The market welcomed the numbers, with Metcash shares opening 5.3 per cent higher to $4.35 on Monday morning.

The company’s food retailers saw an earnings jump of 4.1 per cent, while liquor was up 9.8 per cent and hardware sales were 40.7 per cent higher as the company’s IHG and Total Tools businesses benefited from the residential construction boom.

Metcash revealed on Monday it had entered a long-term leasing agreement with Goodman Group for a 115,000m2 distribution centre at Truganina in Melbourne’s outer west, to replace its current Victorian distribution site in Laverton.

The building, which is expected to be completed in 2024, will carry a fitout cost of $70 million, $20 million of which will be realised in the next year.

“We are delighted to be able to announce this significant long-term investment for our independent retailers in Victoria, which is a reflection of our continued focus on championing their success,” Jones said.

Total group sales have jumped by 8.6 per cent in the first seven weeks of the 2023 year, but the company warned the spectre of inflation could impact the outlook.

“There is uncertainty over the level of inflation going forward, as well as how the impact of inflation and other cost of living increases may impact consumer behaviour in the retail networks of our pillars, and Metcash,” the business said in its financial report.

Jarden analyst Ben Gilbert said that the strong sales figures for the first months of this year could mean stock watchers up their consensus expectations for the company.

The earnings figures could encourage the market to “become more confident that [Metcash] can hold onto a large portion of the share gained through COVID than previously anticipated”, he said in a note to clients.