This new technology can power thousands of homes

(CNN Business)As the world looks to curb climate change and reduce fossil fuel emissions, some companies are focusing on a relatively untapped but vast and abundant source of energy — tidal waves.

On opposite sides of the Atlantic, two firms are working to harness ocean currents in different ways to try to generate reliable clean energy.
Off the coast of Scotland, Orbital Marine Power operates what it says is the “most powerful tidal turbine in the world.” The turbine is approximately the size of a passenger airplane and even looks similar, with its central platform floating on the water and two wings extending downwards on either side. At the ends of each wing, about 60 feet below the surface, are large rotors whose movement is dictated by the waves.

“The energy itself of tidal streams is familiar to people, it’s kinetic energy, so it’s not too dissimilar to something like wind,” Andrew Scott, Orbital’s CEO, told CNN Business. “The bits of technology that generate power look not too different to a wind turbine.”

But there are some key differences to wind energy, primarily that waves are far more predictable than winds. The ebb and flow of tides rarely differs significantly and can be timed far more precisely. 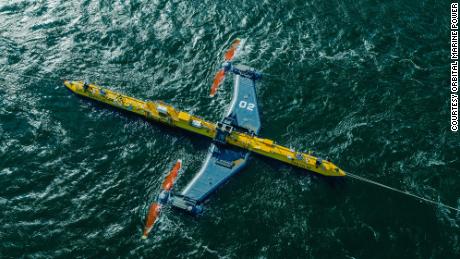 “You can predict those motions years and decades [in] advance,” Scott said. “But also from a direction perspective, they only really come from two directions and they’re almost 180 degrees,” he added, unlike wind turbines that must account for wind from several different directions at once.
Tidal waves are also capable of generating more energy than wind, Scott says.
“Seawater is 800 times the density of wind,” he said. “So the flow speeds are far slower, but they generate far more energy.”
The Orbital turbine, which is connected to the electricity grid in Scotland’s Orkney, can produce up to two megawatts — enough to power 2,000 homes a year — according to the company.
Scott acknowledges that the technology isn’t fully mainstream yet and some challenges remain including the high cost of the technology, but the reliability and potential of tidal energy could make it a useful tool in the fight against climate change.
“It is becoming increasingly apparent that … climate change is not going to be solved with one silver bullet,” he said.

Around 3,000 miles away from Orbital’s turbines, Verdant Power is using similar technology to generate power near Roosevelt Island in New York City’s East River. Although not on the market yet, Verdant’s turbines set up as part of a pilot project help supply electricity to New York’s grid. But rather than float near the surface, they’re mounted on a frame that’s lowered to the bottom of the river.
“The best way to envision what Verdant Power’s technology is, is to think of wind turbines underwater,” the company’s founder, Trey Taylor, told CNN Business. And river currents tend to provide the same advantages for energy generation as ocean currents, he explained (though the East River is also connected to the Atlantic).
“What’s nice about our rivers and systems is that could be 24/7 power,” he said. “Not to ding wind or solar, but the wind doesn’t always blow and the sun doesn’t always shine. But river currents, depending on the river, could be 24/7.” 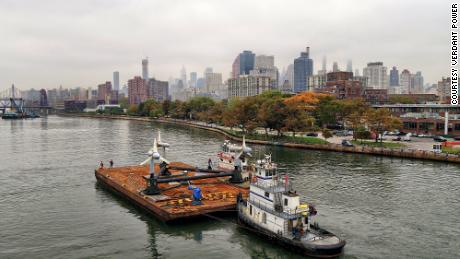 Over the course of eight months, Verdant has generated enough electricity to power roughly 60 homes — though Taylor says a full-fledged power plant built on its technology could generate enough for 6,000 homes. And by his estimate, the global capacity for tidal energy is enormous.
“The potential for energy is something like 250 gigawatts around the world,” he said, which is enough to power 250 million homes for a year. “There’s lots of room and we really hope our competitors succeed too, for the sake of the industry.”

The biggest obstacle to reaching that goal at the moment is how expensive it is to set up and scale up tidal power systems.
“Generating electricity from ocean waves is not the challenge, the challenge is doing it in a cost-effective way that people are willing to pay for that competes with … other sources of energy,” said Jesse Roberts, Environmental Analysis Lead at the US government-affiliated Sandia National Laboratories. “The added cost of going out into the ocean and deploying in the ocean… that’s very expensive to do,” he added. According to 2019 figures from the US Department of Energy, the average commercial tidal energy project costs as much as $280 per megawatt hour. Wind energy, by comparison, currently costs roughly $20 per megawatt hour and is “one of the lowest-priced energy sources available today,” according to the agency. 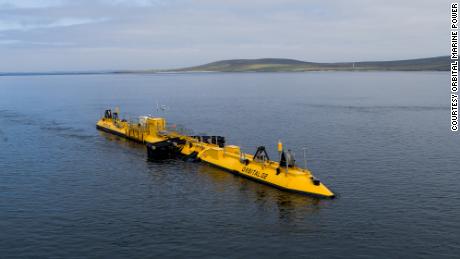 Roberts estimates that tidal energy is two or three decades behind wind energy in terms of adoption and scale.
The costs and challenges of operating underwater are something both Scott and Taylor acknowledge.
“Solar and wind are above ground. It’s easy to work with stuff that you can see,” Taylor said. “We’re underwater, and it’s probably easier to get a rocket to the moon than to get these to work underwater.”

But the goal of tidal power is not so much to compete with those two energy sources as it is to grow the overall pie.
“The low hanging fruit of solar and wind were quite obvious,” Scott said. “But do they have to be the only solution? Is there room for other solutions? I think when the energy source is there, and you can develop technologies that can harness it, then absolutely.”
Source: Read Full Article