Heather, an emergency nurse of seven years, described her medical department in Southern California as a “war zone.”

She works in one of the busiest emergency departments in Los Angeles County, but this week things were more intense for patients than usual.

It starts even before anyone even enters the hospital, Heather said. (She asked to be identified by her first name to avoid repercussions from her employer, which has a policy against speaking to the press.)

There are stations set up outside to separate visitors from patients and to funnel patients with COVID-19 symptoms into a separate triage tent. Security guards are on standby to tell visitors they can’t visit loved ones; police have to be called if those visitors push back against the new policy.

And that’s just the outside of the building.

Inside, Heather and her colleagues have been asked by hospital administration to bring in bandannas and scarves in case they run out of protective masks ― the same advice offered by the federal government this week to hospitals with dwindling supplies.

“The ER is considered a war zone right now, and this is the last place people should be,” Heather told HuffPost over the phone.

As city and state officials urge residents across the country to self-isolate and shelter in place to stop the spread of COVID-19, health care workers are on the frontline juggling their commitment to their patients, the panic from their patients and their own anxiety.

HuffPost talked to doctors, nurses and emergency medical technicians in California (which has at least 982 reported COVID-19 cases), New Jersey (at least 742 cases), Hawaii (at least 26 cases) and Rhode Island (at least 44 cases) about what it’s like fighting against the pandemic. Many health care workers requested anonymity due to hospital policies on speaking to the press.

This week, Heather’s hospital in Los Angeles County announced that visitors were no longer allowed inside, which has led to confrontational and upset would-be visitors. Administrators also set up a tent to keep patients with mild COVID-19 symptoms separated.

Inside the emergency department, Heather and her colleagues are briefed daily on new developments on coronavirus and COVID-19 research released by the Centers for Disease Control and Prevention (CDC). This information changes all the time, which then affects their day-to-day procedures.

“It’s anxiety-provoking for sure,” she told HuffPost. “We’re barely able to grasp these new developments that come day to day and change our method of practice, let alone have to combat paranoid and panicked patients.”

“Sometimes we just don’t know what to say,” Heather said. “Even the CDC doesn’t know.”

Infectious disease researchers say that it is still unclear how severe the disease actually is. According to the University of Chicago Medical Center, the numbers of people diagnosed and dying around the world “are changing daily,” and the numbers that we are seeing now “mostly are just estimates.”

The CDC has a banner prominently displayed up high on its website noting that it is still trying to figure out how the virus spreads. The agency also notes numerous times that there is still a lot they don’t know about the virus, including how it is transferred.

Every day, doctors and nurses are briefed on the latest information on COVID-19, then they go off to tend to their patients the best they can.

Every hospital has its own procedures on how to handle a person who is exhibiting symptoms. Heather’s hospital in California, which is one of the four states with the highest reported cases, begins the evaluation and testing process at the stations outside.

At a hospital in Honolulu, nurses perform these tests while wearing a full PPE (personal protective equipment) suit, including a gown, mask, gloves and head cap.

The test involves long Q-tip-like cotton swabs that nurses swab deep inside both of the patient’s nostrils, often triggering the patient to sneeze near them.

Most emergency professionals are treating every patient as if they might be carrying it to avoid spreading ― and catching ― the virus. That has led to a dangerous shortage of PPEs for medical workers.

Dr. Megan Ranney, an emergency physician in Rhode Island and professor at Brown University, says it is highly likely that health care facilities will soon run out of protective gear as the outbreak continues.

Ranney has been trying to get the federal government’s attention to address the shortage of equipment and COVID-19 tests by tweeting at celebrities and encouraging others to use the hashtag #GetMePPE.

This week, she and several other medical doctors launched a petition asking President Donald Trump to increase the supply of protective equipment and ventilators and to develop federal guidelines to protect health care workers from infection.

Similar petitions have been launched across the country, from the East Coast to Hawaii. In San Francisco, members of the California Nurses Association protested against Kaiser Permanente Medical Center for restricting the use of N95 masks and not doing enough to protect them from coronavirus.

Ranney said she’s concerned after hearing that the hospital administration, in an effort to preserve PPE stock, directed doctors and nurses to wear masks only if they expected to test the patient for COVID-19.

“Which is totally creepy and goes against all of the medical evidence that we have,” Ranney told HuffPost.

“Patients don’t always know what they have before they’re diagnosed. That’s why they come in to see us,” she said, such as patients who come in for things like car crash injuries or stomach pain.

“If patients don’t report that they’ve had a cough or a low-grade fever for a few days, and I’m not masked before I find out that information, and they happen to breathe down or cough on me, then I’m at risk of catching the infection ― and then I can’t take care of other patients,” Ranney said.

Health care workers also run the risk of passing on the virus to other patients if they are not properly protected. 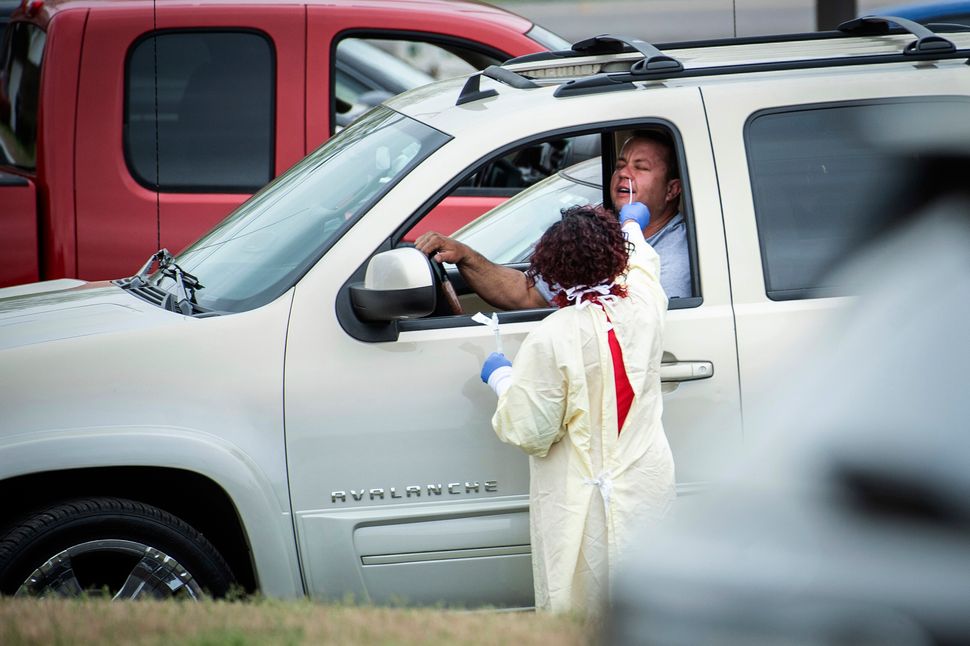 Early research on the transmission of COVID-19 suggests that asymptomatic carriers may be responsible for the rapid spread of the virus.

People with mild symptoms may also unwittingly pass it on to others, including doctors, nurses and emergency medical technicians (EMTs).

This problem is especially dire for first responders who have to enter peoples’ homes and expose themselves to any potential viruses on surfaces or carried by the patient.

The emergency medical station in Little Egg Harbor, New Jersey, is fully staffed by volunteer EMTs and relies partially on donations to maintain their stock of PPE.

Jay Zimmerman, the captain of the Great Bay Regional Volunteer EMS station, had to create new procedures for EMTs responding to calls with patients exhibiting COVID-19 symptoms, which have increased in the last few days.

Instead of having two to three EMTs enter a patient’s house, only one EMT approaches the patient in a full PPE suit while the other stays inside the vehicle.

If the calls continue to come in as they do, Zimmerman estimated that their station will run completely out of N95 masks, which are designed to filter out 95% of airborne particles, in the next couple of weeks.

Zimmerman also worries about his volunteers’ health. Volunteers who are vulnerable to the virus have been asked not to participate, and the others, Zimmerman said, were ready to serve the community.

“We know we’re on the frontlines,” he told HuffPost. “We’re the ones that are actually walking into every home where people are scared they have the coronavirus ― and that the reality is some of them do.”

In Hawaii, where there are relatively few reported cases, one emergency doctor in Honolulu is wary about the outbreak worsening in the islands. He is concerned that the isolated state is not ready to deal with the influx of patients.

“Overall, I feel a sense of dread. Work has been fine, actually, these past few days. But that’s only because we are still early in the outbreak locally. It is here, though,” Dr. Justin Huggins of the Kaiser Permanente Moanalua Medical Center, told HuffPost in an email.

Huggins said his emergency department has not had many patients so far, though the hospital has delayed elective procedures. His staff has also redesigned the department’s physical space and triage station to prepare for what might come. To protect himself, Huggins also now wears a mask with every patient he sees and does not shake hands or get too close to them.

“It feels eerie, a lull before the inevitable storm we are bracing for,” he said. “Anxiety is palpable in the department among patients and staff.”

Huggins is preparing for a new normal that he’s seeing his colleagues elsewhere in the U.S. adjust to; one emergency doctor he knows in Phoenix has been reusing the same N95 mask for four shifts.

He’s still shocked that the federal government suggested they bring in bandannas if they run out of protective equipment.

“Like what? How is this real? We wouldn’t ask our armed forces to go into combat without adequate personal protection,” he said. “How about you use your enormous power to enact bold sweeping plans to scale up domestic production of these essential products, Mr. Trump?”