In an early morning investor call two weeks ago, stem cell treatments maker Mesoblast revealed a dance card full of meetings with the US regulator over the coming weeks and months.

The 17-year-old Melbourne biotech has always had big ambitions, seeking to develop treatments that it claims will be the future of medicine. The conversations with the Food and Drug Administration will be crucial to pushing two of its first-of-their kind products over the line so they can be sold to patients in the world’s biggest economy, and ultimately other markets.

The company is continuing to push for approval of Ryoncil, a medication for children battling severe immune responses after bone marrow transplants. There’s also hope of getting the same active product cleared as a separate treatment for patients whose lungs are failing them due to coronavirus infection.

But it’s not just the future of medicine that hangs on the outcomes of these talks. It’s also about Mesoblast’s very own future as investors are increasingly impatient to see returns and class action lawsuits loom. 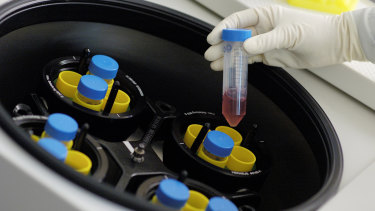 The company was staring down a starkly different reality just ten months ago, when shareholders were told they were on the cusp of a “transformational period” for the business. In August, Mesoblast’s shares were up 148 per cent for the year as investors sweated on approvals for Ryoncil and eagerly awaited positive data from the company’s coronavirus treatment trials.

Fast-forward to today, and the $1.4 billion biotech is yet to bring a product to market after a surprise decision from the US regulator last October sent it back to the drawing board for a drug it had been developing for years.

The company’s share price has see-sawed. The struggles have seen Mesoblast’s ASX share price drop more than 40 per cent over the past year. The stock is down around 60 per cent compared to its peak of $5.25 in September, 2020. The firm’s losses have widened to $US26.5 million ($34 million) a quarter, and groups of disgruntled investors have joined with lawyers in the US to accuse management of misleading conduct.

Yet on Friday morning the stock opened up 6 per cent, taking it more than 20 per cent ahead for the month.

The business has maintained a fierce group of true believers, none more so perhaps than Mesoblast boss Silviu Itescu himself, who owns a 10.6 per cent stake worth about $148 million on Thursday’s closing price.

“You don’t just suddenly throw up your hands and say there is no way forward. There is always a way forward,” he told The Sydney Morning Herald and The Age.

They alleged the company had “made materially false and/or misleading statements, as well as failed to disclose material adverse facts about the company’s business, operations, and prospects”, which led to US investors suffering “significant losses and damages”.

The concerns centre on the argument Mesoblast should have been more transparent about the possibility that the US regulator would demand more detail before Ryoncil could be approved.

Lawsuits may emerge in Australia, too: director of corporate litigator Phi Finney McDonald, Tim Finney, said his firm is likely to proceed with a case on behalf of investors to recover losses “for what we allege were Mesoblast’s aggressive and misleading statements to the market regarding the likelihood that it would be able to commercialise its drug”.

New York Southern District Court documents show Mesoblast’s legal counsel lodged applications on June 14 to defend the company against the US suit, and are expected to apply to dismiss the case.

Mesoblast has told investors it will “vigorously defend” the legal action, with Itescu maintaining that the company has been “extremely transparent” about the firm’s interactions with the regulator.

While the delayed drug approval has caused conflict, everyone seems to agree on one thing: Mesoblast’s experience with the US regulator last year was indeed highly unusual.

After 16 years, more than $800 million in capital raised since 2011 and cumulative losses of $US548 million, Mesoblast was close to US commercialisation. An independent committee that advises the regulator voted 9 to 1 in favour of approving Ryoncil for use in children with acute graft-versus-host disease, an immune response that can occur after bone marrow transplants.

The Food and Drug Administration does not have to take expert advice for treatment approvals, but it usually does. Which made it such a surprise when Mesoblast’s application was not passed in October and the company was forced to tell investors the regulator had asked for more information before it would give approval for the treatment.

“The FDA did something that is very unusual, which is go against a panel that recommended approval. That is something that just about never happens,” said Max Jacobs, an analyst at US firm Edison Group. 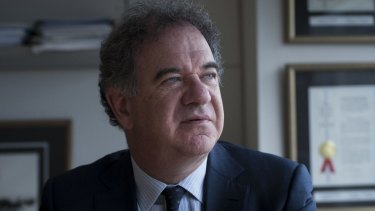 Investors were floored. On the day the news came out, the stock price plunged more than 35 per cent, which prompted the legal action by shareholders stung by the slump.

The FDA had two concerns. It wanted to see another randomised trial where one group got the drug and the other received a placebo or standard care – Mesoblast’s phase 3 trial was single-arm only, with all children receiving the drug. The company was asked to conduct at least one additional trial in adults or children. The regulator also wanted more proof that the company could make the product consistently and at scale.

In response, Mesoblast scheduled an appeals meeting with the FDA and argued for accelerated approval. When asked why the company didn’t set up an additional trial immediately, Itescu said the business had a moral obligation to get the treatment green-lit for seriously ill children for which there were no other options.

“We have an ethical and moral obligation to bring this product to children,” he said.

While investors were digesting the regulatory roadblock, Mesoblast revealed a big corporate win.

In November, the firm said it had secured a deal with Swiss pharma giant Novartis, which included $50 million in upfront cash and investment to jointly commercialise the same product Ryoncil is based on to treat COVID-19 patients in severe respiratory distress. Mesoblast said there were potential milestone payments of $US750 million in the long term on offer.

But seven months on from the announced coup, which boosted Mesoblast’s shares by 30 per cent in the weeks after it was revealed, the agreement has yet to be formalised.

Mesoblast had been undertaking a phase 3 study of its COVID treatment, but stopped enrolling patients when it looked like it was going to miss its primary goal. The company has since said it is combing through the data with Novartis as there were signs the product does have an effect on under 65-year-olds on ventilators.

Asked whether Novartis had any scope to alter the terms of the agreement, Itescu vehemently denies it will end up falling through or being altered.

“We’ve got a contractual arrangement that Novartis had signed,” he said.

The delay has put focus once again on Mesoblast’s balance sheet, however.

The company generates revenue from milestone payments for its research and for licensing of Ryoncil into Japan, where stem cell treatments are more widely used. But its financial results routinely warn investors that the business has been historically unprofitable and needs to keep raising capital to keep going.

In February, Mesoblast’s half-year reports and accounts spooked some when an auditor’s note from PwC noted that “further cash inflows will be required to meet forecast expenditure and to comply with minimum unrestricted cash balance requirements as required under its loan agreements over the next twelve months” and that there was a material uncertainty about the company continuing as a going concern if funds were not raised.

Mesoblast entered a trading halt and a few days later confirmed it had found a surprise new investor, US orthopedic medical centre operator SurgCenter Development, which injected $US110 million into the company.

According to Mesoblast’s most recent quarterly report, the company now has $US158 million cash on hand and enough money to fund the next 12 months of operations.

Itescu insists that the business is in a better cash position than it has been previously — in the same quarter in 2020, for example, it had just $US60 million cash.

“You don’t just suddenly throw up your hands and say there is no way forward. There is always a way forward.”

Even so, the company has net debt of $US56 million, with loan repayments coming due this year. Analysts have forecast it will have to find additional capital if other partnerships or product launches don’t come to fruition.

Itescu insists this is not the end of the road, even if products take more than 12 months from here to come to market: “I don’t see the runway [cash] as being any sort of a short-term issue.”

Mesoblast has become a cult favourite stock over the decades and punters end up in fiery debates in share forums and social media about the biotech’s prospects.

It is one of the most shorted stocks on the local bourse, at 6.7 per cent, and the company regularly pops up in the Reddit forums WallStreetBets and ASXBets as investors discuss its underlying fundamentals.

“They literally have treatments that will save more peoples lives, but nothing is happening with the price. I guess nothing will until the FDA approves something,” one investor suggested on Reddit earlier this month.

The company has larger backers in for the long haul, too. Itescu’s long time friend, billionaire Alex Waislitz, holds a 4.7 per cent stake through his Thorney Investments group, according to Bloomberg data.

Waislitz declined to be interviewed for this story, but said he remained supportive of the business.

Many analysts are also taking an optimistic view despite the long road of troubles ahead: consensus estimates have both the ASX-listed shares and US authorised depositary interests rated as ‘buys’, even though some of these are labelled speculative.

Back in March, Edison analyst Max Jacobs predicted the business would have to come up with another $US75 million by 2023 to keep funding its operations. Despite this, he says the data flowing through from other research programs, including a cardiovascular disease treatment, is “actually quite good”.

On the question of whether the firm could see its first product approved this year, however, Itescu says he can’t say for sure.

“It’s better for me to be appropriately prudent,” he says.

“I think it’s too early for me to say. The next step is let us have a meeting with the FDA review team.”