Home » World News » There's a double standard on Pennsylvania Avenue. Despite Biden's strict rules around weed, Capitol Hill staffers down the street say they have no problems getting high and hired.

There's a double standard on Pennsylvania Avenue. Despite Biden's strict rules around weed, Capitol Hill staffers down the street say they have no problems getting high and hired.

Using marijuana is a fireable offense in President Joe Biden’s White House, but many power players who work a couple of miles away on Capitol Hill can and do get away with it. Most congressional staffers never get asked about their cannabis use, so they can light up or take edibles without too much concern about losing their jobs.

A former senior Republican staffer told Insider he was “shocked” when he got hired for a committee-level job in the Senate and no one asked him to take a drug test.

He had worked minimum-wage jobs before, including at a movie theater and big-box retailer, and had entry- and midlevel trade-association jobs. All had tested him for drug use.

“I just assumed all employers would do this, including the government,” said the former staffer who requested anonymity in order to speak candidly. “But as with many things, Capitol Hill makes its own rules.”

That was in 2011, and he never was tested during his more than three years on Capitol Hill. Nothing appears to have changed since.

Few, if any, offices require drug testing or ask staffers about their previous use, more than a dozen other former and current staffers told Insider. If anything, weed use among Capitol Hill staffers appears to have become more common as an increasing number of states legalize its use and attitudes change, several people said.

Some Hill staffers routinely use marijuana to socialize with friends, blow off steam in a cutthroat, hard-charging culture where 13-hour days are the norm, or when they’re annoyed about having to work late on a Friday night.

One former Democratic aide said he saw cannabis-edible packaging discarded in trash cans on the Hill and that he heard people would walk outside toward the Democratic National Committee headquarters to avoid smoking illegally on federal grounds, where they could face penalties.

“More people smoke on the Hill than you think, and you’d be surprised by who does,” he told Insider. “That’s at the member level and among the senior staff, as well as at the junior-staff levels.”

Congressional employees can use cannabis privately and on their own time — possessing small amounts is legal in DC. Using it is not considered a big deal among Hill staffers as long as they’re discreet.

“The culture on the Hill is that it happens and it’s done, but nobody says anything about it,” the former Democratic aide, who like most others interviewed requested anonymity for fear of jeopardizing their jobs, said.

The difference in attitude on Capitol Hill is in contrast with the White House, federal agencies, and federal contractor jobs, which have far stricter rules against marijuana use.

It also underscores deep disparities among US workers. Congressional staffers hold some of the most powerful jobs in government, and most don’t face consequences for their recreational drug use, but minimum-wage workers can be forced to take urine tests as a condition of employment. Marijuana use isn’t necessarily an impediment to Hill staffers having illustrious careers, but others — particularly people of color — have for decades been disproportionately hit with arrests and long prison sentences for using or distributing marijuana. 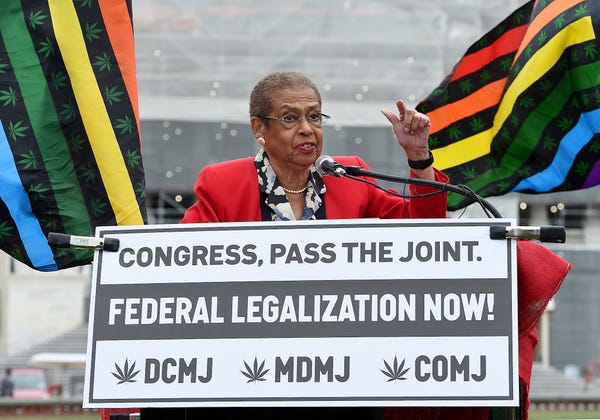 A growing pro-weed chorus in Congress

There’s a growing chorus in Congress led by Senate Majority Leader Chuck Schumer to overhaul the nation’s cannabis laws, some of which Biden wrote in 1994 when he was in the Senate. Weed activists have gained some unlikely allies on both sides of the aisle, including Rep. Don Young, an Alaska Republican, and Sen. Rand Paul, a Kentucky Republican.

But the overhaul is unlikely in this Congress because lawmakers still don’t have enough votes in the Senate to pass a bill.

Cannabis-reform activists such as Adam Eidinger, a cofounder of DC Marijuana Justice, would like to see all levels of government, including the White House, quit scrutinizing employees’ use of marijuana.

“There are just too many people that have used it,” Eidinger told Insider. “And I fear we’re only going to get one kind of person in these positions. You need a variety of people.”

There have been only a handful of publicly known cases where marijuana use got an employee or lawmaker in trouble on Capitol Hill.

In 2010, Capitol Police arrested Marcus Stanley, a senior economic advisor for then-Sen. Barbara Boxer, a Democrat of California, on suspicion that he attempted to bring marijuana into the Hart Senate Office Building. Boxer’s office called Stanley’s actions “wrong and unacceptable.” He resigned.

In 2014, Rep. Jared Polis, a Democrat of Colorado, caused a stir when he ventured a guess that between five and 10 of his colleagues in Congress used marijuana.

Two years after that, DC Marijuana Justice made headlines by handing out free joints to Capitol Hill staffers who presented their congressional IDs. More recently, numerous stories have reported that Rep. Matt Gaetz, a Florida Republican being investigated by the Justice Department over allegations of sex trafficking, sometimes smells like weed when he’s on the House floor.

While several staffers said alcohol was the most common drug of choice in Washington and flowed freely at events, they added that many staffers used cannabis to help manage stress.

Hill staffers were especially burned out during the Trump years because he’d quickly change his mind on policies and blast out his decisions over Twitter. They’re also dealing with the trauma of the violent January 6 pro-Trump mob attack on the Capitol.

Some communications staffers would write press releases while stoned, hoping it would boost their creativity, according to the former House Democratic aide who said cannabis was more prevalent among Hill employees than people might think. Others smoked a bowl in what he called a “f— the boss” move after being told to work late on a Friday night or on a weekend.

Another former staffer who worked for Democrats in both chambers said she only occasionally used cannabis on her own time with friends but never around anyone she worked with. It was important, she said, for her to keep her professional and personal lives separate.

It’s unclear where or how staffers get their cannabis, as they have to contend with DC’s unusual cannabis laws.

Several years ago, Republicans in Congress, led by Rep. Andy Harris of Maryland, blocked voter-approved legalization in DC. As a result, adults 21 and older in DC can possess or use limited amounts of cannabis in their homes, but businesses and individuals can’t sell it for recreational use.

That means customers who want to buy marijuana legally have to use a workaround unless they qualify for medical use. DC businesses get around the restrictions by selling customers items like T-shirts, artwork, juices, or baked goods that come with a “free” pot gift. 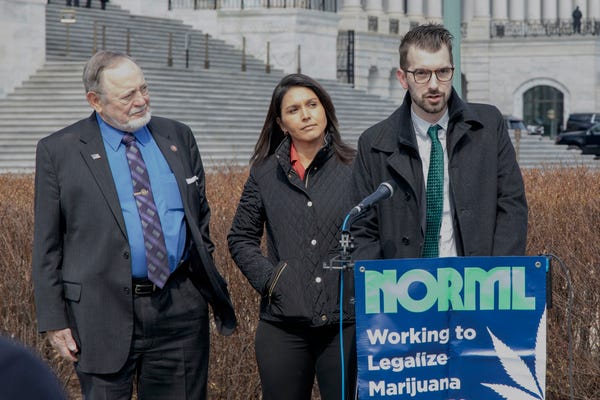 Each office makes its own rules

Every House member’s and Senator’s office operates like its own small business as far as rules for employees go. Offices receive a human-resources handbook, and each lawmaker is allowed to tweak its guidelines.

House rules allow lawmakers to drug-test their employees if they so choose, as do policies in the Office of Congressional Workplace Rights that cover employees working for both chambers. House members can expense the tests to the same accounts they use to pay for staff salaries, furniture, tech, and office supplies.

No one interviewed for this story — including four legalization activists — knew of any office that routinely conducted drug testing.

“If you’re just a regular staffer in Congress, it’s not a factor at all,” a former Senate GOP communications staffer said.

Some staffers told Insider they weren’t aware of anyone using cannabis but wouldn’t be shocked if it happened. An aide from the Committee on House Administration said the Office of House Employment Counsel provided advice to individual House offices about drug testing but that the committee wasn’t involved in those discussions.

Insider sent a survey to 528 House and Senate offices, including leadership. (Some congressional seats are vacant, such as for those hired to work in the Biden administration.)

Only Democratic Reps. Mike Quigley of Illinois and Sara Jacobs of California replied to the survey. Neither test employees for drug use.

“Our office has never conducted drug testing of any kind and has never fired any employee for drug use,” a spokesperson from Quigley’s office said.

His office also provided Insider with its drug- and alcohol-abuse policies. They say employees cannot use illicit drugs, become intoxicated from alcohol, or improperly use prescription medication while working. Those who violate the rules can be disciplined “up to and including immediate termination,” the policy says.

Jacobs’ office does not regulate its employees’ cannabis use.

“Congresswoman Jacobs believes that cannabis should be decriminalized and is proud to represent a state where that has already happened,” a Jacobs spokesperson said.

Other offices would likely be less accepting, a current House GOP staffer told Insider. Staffers’ behavior can be scrutinized both during and outside office hours. Everything they do is seen as a reflection of the lawmaker they work for.

The GOP aide, who said there was “no question” that some staffers used cannabis, said he thought certain conservative lawmakers would crack down on cannabis use among staffers if they were to find out about it, including through social media.

“Coworkers in previous offices have gotten in trouble over online-dating profiles,” he said. “I can only imagine if they were caught on social media smoking pot.”

Another Republican, a former Senate staffer who worked in communications, said it would be seen as a “comms nightmare” because cannabis is still illegal federally.

“You’re working for a body that’s supposed to create and write federal laws,” he said. 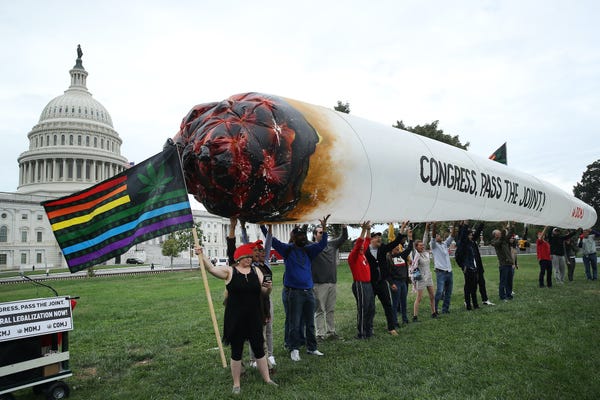 Congressional staffers who get security clearances and deal with sensitive matters face far stricter rules, people interviewed for this story said. Clearances go to one or two staffers in each Hill office and certain intelligence and homeland-security committee staff who handle classified information. These employees get screened about their former and current drug use — the latter of which is expected to be zero. To get clearance, they’re expected to be honest in their answers and never to use once they do get cleared.

“The people I know who have security clearances on the Hill are the most straight edge ever,” the House GOP staffer said.

The security clearance involves interviews with people close to the prospective employee and can include polygraph tests. One former chief of staff to a Republican House member who also worked on committees requiring a security clearance said the process was “cumbersome and rigorous” but that everyone who gave him advice stressed the importance of being honest about past use. He said he had used marijuana three or four times in college but never since.

“What they are looking for is: Is there something you’re ashamed of you can be blackmailed over?” he said.

Capitol Hill employees who aspire to one day work for the White House, or even run for office, are more likely to abstain from cannabis in case it becomes an issue later.

“I think it’s generally understood,” one current senior GOP Senate aide told Insider, “if you ever might need a security clearance at some point, then doing illicit drugs, even something on the level of marijuana, isn’t worth the risk.”

Do you have a story to share about your workplace experiences, including with cannabis use on Capitol Hill or elsewhere in Washington? Send tips to reporter Kimberly Leonard at KLeonard@Insider.com.