The U.S. Capitol entered an emergency lockdown with senators sheltering in place as thousands of Trump supporters — furious about the president’s reelection loss — invaded the building following Wednesday morning’s massive “Save America” demonstration.

The mob of rioters violently clashed with police while screaming debunked claims of electoral fraud. Shots were fired, injuring at least one woman who was shown in news footage leaving the Capitol on a stretcher. The Secret Service raced Vice President Mike Pence to a secure location; the National Guard has since been deployed.

History will ultimately hold Trump responsible for this chaos, but the plot to storm the Capitol was also seeded online in far-right message boards, encrypted messaging apps and other social media channels. Agitators there have organized violence, urged each other to bring weapons to the rally, called for civil war and cheered on the unrest as it unfolded. 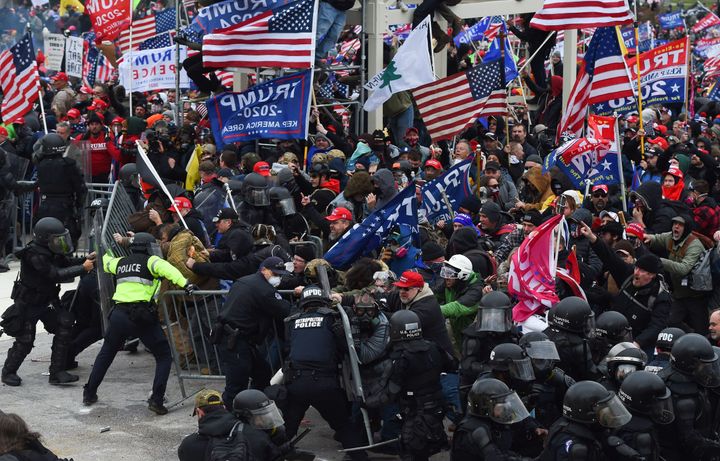 Using hashtags such as #StormTheCapitol and #StopTheSteal, users of the conservative online networks Parler and Gab celebrated Wednesday’s clashes and offered to serve as “back up.”

“AT THIS POINT, INSURRECTION ACT, MARTIAL LAW AND RUN THEM THE FUCK OVER WITH A MILITARY OPTION!!!” one Parler commenter wrote.

On the homepage of thedonald.win, a popular online forum for Trump fans, the majority of Monday’s top 50 posts about the election certification featured comments calling for violence, according to an analysis by the disinformation research organization Advance Democracy Inc.

One recent post said protesters should “not let [anyone] disarm someone without stacking bodies,” adding that they should be “ARMED WITH RIFLE, HANDGUN, 2 KNIVES AND AS MUCH AMMO AS YOU CAN CARRY,” The Washington Post reported.

In the run-up to Wednesday’s protest, members of private, pro-gun Facebook groups incited one another to bring guns to the event, in defiance of local laws prohibiting firearms within 1,000 feet of public demonstrations, Media Matters found.

“Take your fucking guns … ITS YOUR CONSTITUTIONAL RIGHT!” one person wrote. “if anyone goes to Dc unarmed on the sixth they are dumb ass fucks,” another added.

Videos with hundreds of thousands of views on TikTok also encouraged rally attendees to show up armed, according to NBC News.

On Twitter, calls for violence even erupted against Pence, whom Trump directed to reject electoral votes in favor of President-elect Joe Biden — something that is beyond Pence’s power, and which he has refused to do.

“Mike Pence didn’t have the courage to do what should have been done to protect our Country and our Constitution, giving States a chance to certify a corrected set of facts, not the fraudulent or inaccurate ones which they were asked to previously certify,” Trump tweeted. “USA demands the truth!”

Trump ally and lawyer Lin Wood previously tweeted that Pence should be arrested for treason and executed by firing squad — a call that was widely echoed on Wednesday after Trump castigated Pence on Twitter and in a rambling speech that he delivered at the protest. QAnon conspiracy theorists on Gab are now baselessly accusing the vice president of pedophilia.

Meanwhile, insurrectionists are waving Confederate flags and refusing to vacate the Capitol, to the great delight of Trump-loving trolls online.

As Trump urged peace amid the mayhem on Wednesday afternoon (while also thanking rioters and telling them, “We love you,”) right-wing influencers quickly surmised that the violence wasn’t actually caused by Trump supporters, but instead, by antifa activists in disguise who were trying to make them look bad.