As the coronavirus pandemic first loomed over and then raged through the U.S., President Donald Trump gave the public a heavy dose of happy talk to sweep away any worries.

Trump’s sunny statements as the pandemic accelerated its spread in the nation have been criticized as another example of his rampant lying or the result of his vast ignorance and inability to understand the concept of public health. There’s an additional explanation for these statements: Trump is a lifelong student and proponent of the power of positive thinking.

That type of thinking can be dangerous, as it proved to be in this health crisis. Had Trump acted sooner, rather than try to actualize the virus away, he could have actually saved lives. But it’s a philosophy that’s been drilled into Trump’s head since childhood ― one he turned into part of his own personal brand. And not even a global pandemic that’s killed tens of thousands of Americans on his watch will make him abandon it.

As a child, Trump attended the midtown Manhattan Marble Collegiate Church where the famous pastor and self-help guru Norman Vincent Peale preached a doctrine of positivity. Peale blended evangelism, free-market capitalism, psychology and snake-oil salesmanship in his 1952 best-seller “The Power of Positive Thinking.”

His three-step program to “Prayerize,” then “Picturize,” and then, “Actualize,” could turn “people whose lives were very bad” into “very good people.” He also offered mantras and strategies of self-hypnosis designed to help the reader pull themselves up by their self-esteem. Business elites flocked to buy his book and attend his church, including real estate tycoon Fred Trump and his middle son.

Peale was, “the greatest speaker I think I’ve ever witnessed,” Donald Trump told the Christian Broadcasting Network in 2015. Trump’s affinity for Peale has been noted by many publications including The New York Times, Politico and The New Republic.

“Donald would demonstrate positive thinking throughout his life, as it became a true habit of his heart,” Michael D’Antonio wrote in his 2015 Trump biography “Never Enough.” “His projects and creations would always be, in his words, ‘the best’ and ‘the greatest,’ and when reminded of failures or inconsistencies in his claims, he would respond with phrases like, ‘Yeah, whatever’ and race on to describe another of his achievements. Positive thinking all the way.” 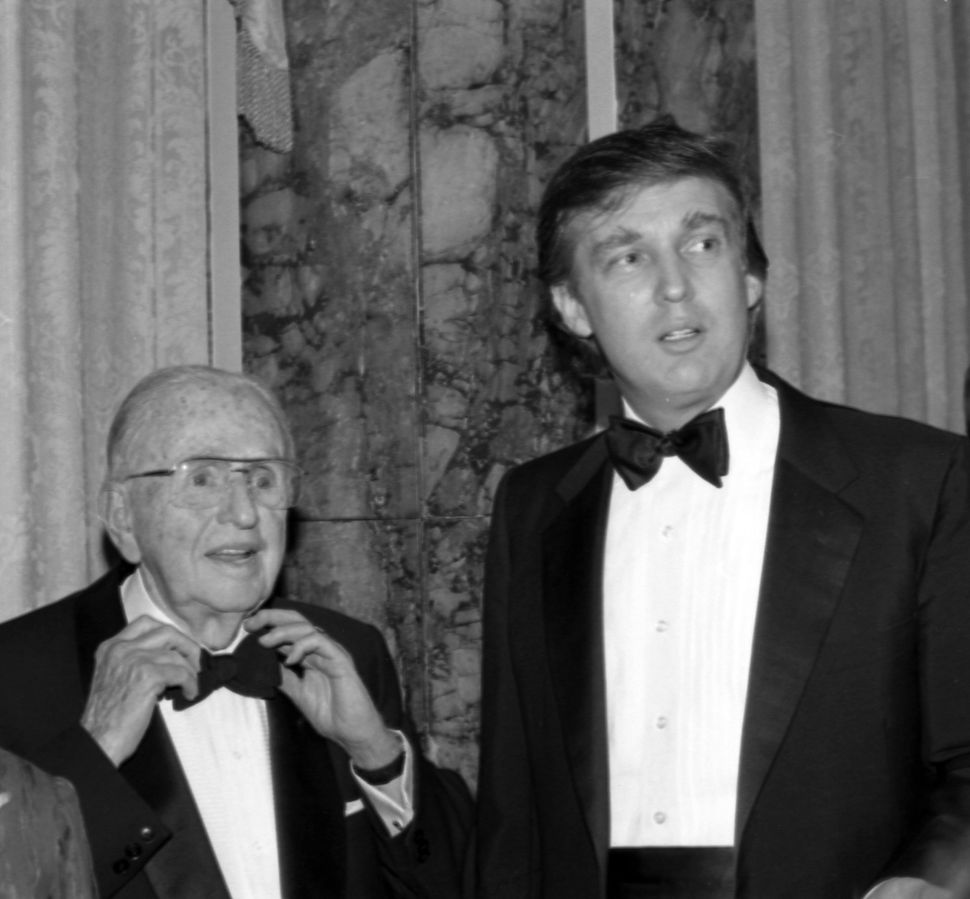 Trump’s own books (ghostwritten to parrot his own voice) are themselves heirs to Peale’s self-help success genre. And they are peppered with paeans to Peale’s brand of positive thinking.

“Positive thoughts create positive visuals,” Trump (and ghostwriter Meredith McIver) wrote in 2004′s “How To Get Rich.” “I know from experience that if I can just see something as a possibility, it has a much better chance of happening than if I can’t see it happening.”

In 2009′s “Think Like A Champion,” Trump (or who the uncredited ghostwriter was) recounted an interviewer asking him about his “greatest fears.”

“I said I don’t have any,” the book says. “He seemed surprised, but this is how I see it: If you label something a fear, then it creates fear when sometimes it’s not a fear but a concern.”

Another part of “Think Like A Champion” describes how Trump came to view himself as a “genius” ― and how the reader can, too. “Someone asked me if I thought I was a genius,” the passage goes. “I decided to say yes. Why not? Try it out. Tell yourself that you are a genius.”

This manner of thinking suggests that individuals can force reality to turn positive simply by embracing a narrative in their own heads and casting out any negativity. It’s a credo that discourages acceptance of realities that don’t fit a positive narrative, and encourages faking it until you make it, and suppressing negative thoughts when you don’t. It’s how a man without political experience persuaded himself he should be the president.

“[I]t is an affront to God when you have a low opinion of yourself,” Peale added.

When Trump refuses to acknowledge a negative reality by telling the public, “We’re in great shape,” or, “It will just go away,” he is just following his own positivity script. A negative must be spun into positive, even when the word “negative” is involved.

The same goes for Trump’s bizarre cheerleading for the anti-malarial drug hydroxychloroquine as a cure-all and prophylaxis against COVID-19, the disease caused by the coronavirus. Trump has touted the medication ― unproven as a COVID-19 treatment ― ever since a tweet by an anti-Semitic “philosopher” claimed the drug as a miracle cure led to a pseudo-study, which was subsequently shared in a tweet by billionaire Elon Musk.

Trump has since said he is a “big fan” of hydroxychloroquine, which he calls a “game-changer.” He has insisted “there’s a very good chance” it works as a preventative medicine “especially early on.”

He’s not just a spokesman, he’s a client. Trump claimed on May 18 that he has been taking the drug daily. 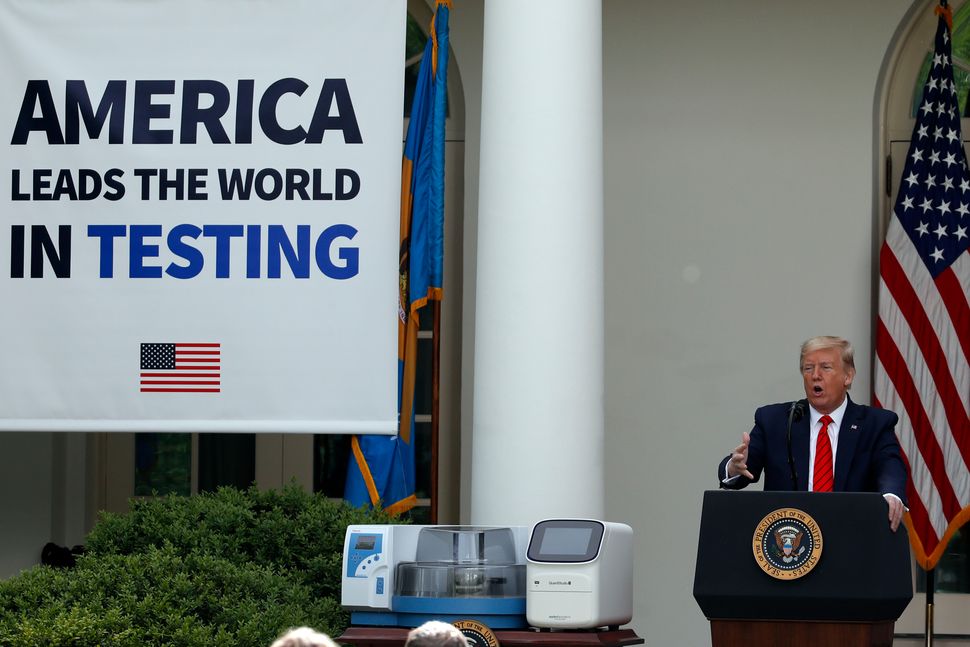 No conclusive evidence has emerged that hydroxychloroquine helps to either prevent or mitigate the effects of COVID-19. It is being tested in clinical trials. One study published in the Journal of the American Medical Association found it has no benefit. Another study, currently pending peer review, conducted by the U.S. Department of Veterans Affairs found the drug provided no benefit and even led to higher death rates.

As Trump described in his books, by simply telling people you are a genius, you will become one. By simply promoting hydroxychloroquine, Trump believes he can visualize its success into being. He also believes that claiming a pandemic has been well-handled makes it so.

In April, at one of his briefings on the crisis (which routinely featured other officials lauding his leadership), he insisted he was not painting a rosy picture of the situation. When he shot down a reporter’s question about “happy talk,” he acknowledged briefly that not all was well.

The bottom line remains ― none of his usually pervasive happy talk and positivity-promoting has been able to mask the rising U.S. body count, due to soon hit 100,000 people. New estimates from Columbia University suggest that 36,000 lives would have been saved had the country imposed lockdowns one week earlier than it did.

Now Trump is urging states to reopen businesses and public spaces, in spite of the continued spread of the virus in many areas. The power of positive thinking is not only impotent in the face of Mother Nature, but downright dangerous.

Peale’s critics recognized the dangerous implications of his positive thinking ideology at the time.

“The mastery Peale speaks of is not the mastery of skills, but the mastery of fleeing and avoiding one’s own negative thoughts.” Harvard University professor Donald Meyer wrote in a 1955 piece for The New Republic titled “Confidence Man.”

For Peale, “real human suffering does not exist; there is no such thing as murderous rage, suicidal despair, cruelty, lust, greed, mass poverty, or illiteracy,” Murphy wrote. “All these things he would dismiss as relatively trivial mental processes [that] will evaporate if thoughts are simply turned into more cheerful channels. This attitude is so unpleasant it bears some search for its real meaning. It is clearly not genuine denial of evil but rather a horror of it.”

Trump, too, cannot cope with the morbid reality of the dead on his watch. He retreats to his pleasing positive imaginings where he can “picturize” and “actualize” a positive outcome.

A magic cure, perhaps. Or, “One day it’s like a miracle — it will disappear.”