One of Melbourne’s oldest and grandest hotels, The Espy, and a string of other popular city watering holes have been sold in a $100 million-plus deal to a hotel group backed by Wall Street private equity giant KKR.

The Esplanade, built on St Kilda’s waterfront in 1878, is part of a collection of hotels owned by five mates who launched a pub empire known as the Sand Hill Road group in their 20s, leasing their first venue, Fitzroy’s Commercial Club Hotel, two decades ago. 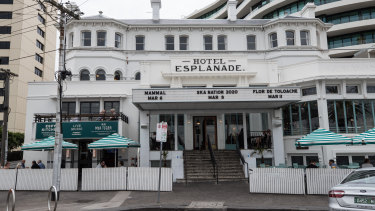 In a deal signed late on Tuesday, KKR-backed Australian Venue Company purchased the leasehold rights – the pub’s operating business rather than the freehold property – for eight of Sand Hill’s venues.

The group is known for renovating and restoring run-down pubs to their former glory, with a focus on food rather than pokies.

The pubs sold to Australian Venue Company include The Espy, the Garden State Hotel in Flinders Lane, The Posty, Bridge Hotel, Holliava and Richmond Club all in Richmond, the Prahran Hotel and Terminus in Abbotsford. 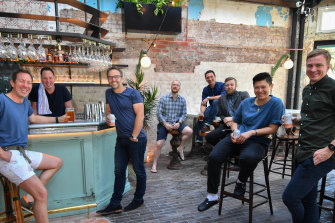 Another historic pub owned outright by the group, The Waterside in King Street, is not part of the deal.

“We’ll do the Waterside Hotel. We’re not leaving the industry,” Andy Mullins said.

The brothers, along with business partners Andrew Larke, Doug Maskiell and Tom Birch, snapped up The Espy, one of the city’s most famous live-music venues, in 2017, buying the freehold site after the business had closed and the venue slipped into disrepair.

They re-opened the St Kilda landmark a year later after giving it an extended facelift.

Listed with the National Trust in 1990, The Espy has hosted famous foreigners like Mark Twain and Sarah Bernhardt and it was the springboard for many local musicians' careers.

“It’s a great group of pubs. We’ve looked at it for a number of years,” said Paul Waterson, chief executive of Australian Venue Company.

The pub group’s gastro-focus, high turnover and city locations make them a lucrative and sought after proposition.

'We’ll do the Waterside Hotel. We’re not leaving the industry.'

The pubs are expected to add about 15 per cent to Australian Venue Co’s revenue once the deal is settled in early April, providing more than $100 million annually in earnings before interest, tax and depreciation.

Mr Waterson’s company controls 170 hotels across the country and is in expansion mode.

Last year it bought a slice of Coles' pub empire. Its operation now includes 87 Spirit Hotels venues in Queensland which have about 3000 poker machines. Coles kept control of the pub's bottle shops.

“Ultimately there will continue to be consolidation in the industry. We want to continue to play a part in that,” Mr Waterson said.

New York-based KKR scooped up an 80 per cent share in Australian Venue Company in mid-2017 for about $190 million, when it was run by former Spotless boss Bruce Dixon.