The “cash box” company that plans to acquire Donald Trump’s fledgling social media business and provide it with $US1.3 billion ($1.9 billion) of funding has revealed it is under investigation by a federal grand jury, threatening completion of the deal.

The disclosure by Digital World Acquisition Corp (DWAC) was made in a filing to the US Securities and Exchange Commission (SEC) in which the company said it became aware on June 16 that a New York grand jury had issued subpoenas to each member of its board. 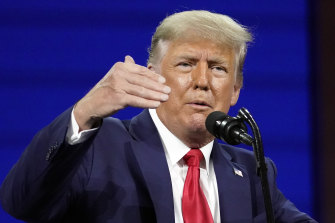 Truth Social was planned to be the flagship product of the Trump Media & Technology Group, a startup that Trump’s advisers said would become a “media powerhouse”.Credit:AP

The subpoenas sought similar documents to those demanded in an earlier (and ongoing) SEC investigation; requests related to DWAC’s filings in relation to its initial public listing , communications “with or about multiple individuals” and information about a Miami investment firm, Rocket One Capital.

The subpoenas and the underlying investigations by the Department of Justice and the SEC could be expected to materially delay the deal with Trump’s Truth Media & Technology Group (TMTG).

The filing also disclosed that one of DWAC’s directors, Bruce Garelick, had resigned. Garelick has previously been described in DWAC filings as the chief strategy officer at Rocket One.

News that federal prosecutors had launched a parallel investigation to an SEC inquiry that started late last year – and were far enough down a serious track to convene a grand jury – wiped 10 per cent off a DWAC share price that had already been tumbling.

When news of the deal with Trump was announced last October DWAC’s shares rocketed from under $US10 to as much as $US175 but, amidst this year’s market turmoil – and increasing disenchantment with “Special Purpose Acquisition Companies” (what Australians would recognise as cash box companies) – the price has plummeted.

It would seem that the Department of Justice and SEC are looking at very similar issues.

The SEC became interested in DWAC after the New York Times reported last year that the vehicle’s promoters met with Trump in March last year, about six months before the deal to acquire Trump’s Truth Social was announced. DWAC was listed in September and announced the deal in October.

SPACs aren’t allowed to have specific acquisitions in mind when they raise funds, a regulation designed to avoid the vehicles being used to get around the onerous disclosure requirements and investor protections provided by conventional initial public offerings.

DWAC has said previously that none of its executives had been engaged in any “substantive” discussions with Trump or Truth Media officials.

DWAC raised $US293 million at $US10 a share for its listing and has commitments for another $US1 billion at either $US10 a share or a 40 per cent discount to the market price if the deal with Trump is consummated.

The institutional investors in that second tranche of funds, and Trump, would make a killing at the current prices of DWAC shares and warrants (albeit far less of one than when the vehicle was valued at more than $US5 billion last year) if the merger of DWAC and TMTG is completed. 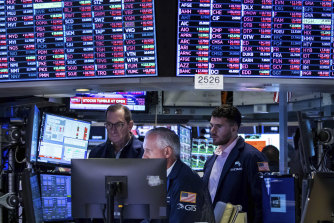 The news sent the already-plummeting DWAC share price even lower.Credit:AP

Trump himself would end up with between 47 per cent and 58 per cent of a vehicle valued at well over $US1 billion even at the lower prices and one containing $US1.3 billion of cash if the commitments from the institutional investors are met.

The deal is supposed to complete by September 8, although there is provision for a six-month extension if the investors agree.

Given the volatility in the market, the poor performance of SPACs generally and the threat posed by the twin investigations, it would be brave investors who committed themselves to an extra six months of exposure to the market and legal risks.

Without the DWAC funds, TMTG’s future is clouded. It raised $US15 million to build its Truth Social rip-off of Twitter after Twitter banned Trump from its service after the January 6 invasion of the Capitol building and cut him off from his 89 million followers.

TMTG without Trump is worthless and its value if the core of Trump’s appeal is given away elsewhere is near-worthless.

Truth Social launched in February but has been plagued with technology-related issues, with some users forced onto a waiting list for access to the platform that lasted for two months. It still doesn’t have an Android app, which means it can’t access 40 per cent of the US market.

It has about 2.6 million lifetime downloads from the US Apple store and Trump himself is followed by about 3.3 million users – less than four per cent of the audience he once had on Twitter. Twitter has nearly 230 million active users.

It probably hasn’t helped a platform created in response to Twitter’s banning of Trump and some other conservatives – a platform that says it exists to provide users with a true free speech platform and avoid cancellation by “Big Tech” – that Truth Social has itself been banning users (other than Trump) for making references to the January 6 committee hearings.

If, as a result of the federal prosecutors’ and SEC actions, DWAC is unable to complete the deal with Trump, TMTG will be forced to shop around for new investors if it is to have any hope of avoiding the fate of a long list of other failed Trump enterprises.

Nor would it have comforted prospective investors to learn that DWAC’s contract with Trump allows him to post political statements (which is what attracted his Twitter user base) on other platforms, particularly as Elon Musk has vowed to allow Trump and other banned users back onto Twitter if his bid for that platform is successful.

TMTG without Trump is worthless and its value if the core of Trump’s appeal is given away elsewhere is near-worthless.

While Trump might be motivated by the prospective riches if Truth Social succeeds, his political future and his value to social media lies in his political standing, which (with his own ego) dictates reaching the widest audience. That’s on Twitter, not Truth Social.

If, as a result of the federal prosecutors’ and SEC actions, DWAC is unable to complete the deal with Trump, TMTG will be forced to shop around for new investors if it is to have any hope of avoiding the fate of a long list of other failed Trump enterprises.

In the current market environment the increased aversion to SPACs, the January 6 committee’s continuing highlighting of Trump’s role and actions in the lead up to the invasion of the Capitol building, the prospect of competing for Trump’s messaging with Twitter and uncertainty as to whether Trump will be the Republican nominee at the next presidential election (and therefore continue to be as relevant) were all working to diminish TMTG’s appeal and value even before the latest threat to the deal emerged.