The Supreme Court on Friday morning declined to issue a ruling one way or another on a case about whether or not the Trump administration may direct that illegal immigrants be excluded from the census count for the purposes of congressional representation.

An unsigned opinion from the majority of the court concluded that it would be premature to issue a ruling because it is uncertain how the administration will eventually implement the directive to not count illegal immigrants from a memo President Trump signed in July.

"At present, this case is riddled with contingencies and speculation that impede judicial review," the unsigned opinion of the court read.

"The President, to be sure, has made clear his desire to exclude aliens without lawful status from the apportionment base. But the President qualified his directive by providing that the Secretary should gather information 'to the extent practicable' and that aliens should be excluded 'to the extent feasible," it continued. "Any prediction of how the Executive Branch might eventually implement this general statement of policy is 'no more than conjecture' at this time."

Essentially, the majority said, there is no legally redressable injury at present as the policy has not yet been implemented.

"The plain meaning of the governing statutes, decades of historical practice, and uniform interpretations from all three branches of Government demonstrate that aliens without lawful status cannot be excluded from the decennial census solely on account of that status," Breyer wrote. "The Government’s effort to remove them from the apportionment base is unlawful, and I believe this Court should say so."

The census numbers, according to the Census Bureau's website, must be delivered to the president by the end of this month. Trump must then give those numbers to Congress within one week of when the next session of Congress opens in early January. Then the clerk of the House, within 15 days of that, needs to inform governors of how many House members their individual states will have for the next decade so the states can go ahead with their apportionment. 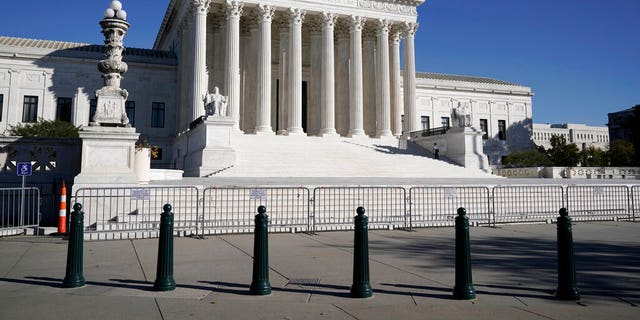 In this Nov. 4, 2020 photo, The Supreme Court in Washington. A majority Supreme Court opinion issued Friday declined to issue a definitive ruling on whether or not the Trump administration may exclude illegal immigrants from the census for purposes of Congressional representation. (AP Photo/J. Scott Applewhite)

With the numbers not yet delivered, the Supreme Court majority said, it is not clear to what extent the government will even be able to follow Trump's memorandum.

"Everyone agrees by now that the Government cannot feasibly implement the memorandum by excluding the estimated 10.5 million aliens without lawful status," the opinion later said. "Yet the only evidence speaking to the predicted change in apportionment unrealistically assumes that the President will exclude the entire undocumented population."

Dale Ho of the ACLU's Voting Right Project said that his group may head back to court once more clarity exists on what exactly the government will do.

"This Supreme Court decision is only about timing, not the merits," he said. "This ruling does not authorize President Trump’s goal of excluding undocumented immigrants from the census count used to apportion the House of Representatives. The legal mandate is clear — every single person counts in the census, and every single person is represented in Congress. If this policy is ever actually implemented, we'll be right back in court challenging it."

The issue could conceivably be back at the high court once the effect of the administration's policy becomes more concrete. It could also go away if the census numbers take long enough that President-elect Joe Biden is sworn in and reverses the policy before they are given to the president, turned over to Congress and delivered to the states.