Though his business is booming thanks to thousands of shoppers snapping up toilet paper, Morgan Ranieri still can't get his hands on some fresh rolls.

"I'm down to one roll at home," the chief executive laughs. "It's hard not to freak out, maybe I should have panicked?" 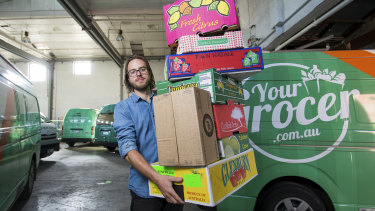 YourGrocer owner Morgan Ranieri. The coronavirus is increasing sales for some retailers.Credit:Paul Jeffers

Ranieri runs online grocery delivery business YourGrocer, which services inner Melbourne and has seen a significant increase in demand over the past two weeks as coronavirus concerns whip shoppers into a frenzy.

"We're definitely seeing an uptick, but we're trying to act rationally. I don't know how to call the quantum of it just yet," he says.

"We're planning for [an increase of] two orders of magnitude. But it's all moving so fast."

Ranieri is far from the only chief executive stunned by the voracity of demand for everyday items as the coronavirus pandemic takes hold. Toilet paper, hand sanitiser and rice have become precious commodities on shelves across the country, at times selling out within minutes of supermarkets opening their doors. 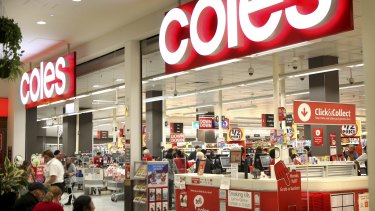 Sales at Coles for the third quarter could be the best in a decade thanks to panic buying.Credit:James Alcock

Woolworths, Aldi and Metcash, which supplies the country's independent supermarkets, will also benefit from this surge. JP Morgan analyst Shaun Cousins told clients last week that while the buying was "surprising", it was undoubtedly a good thing for sales.

Jim Power, analyst at major Coles and Woolworths shareholder Martin Currie, agreed that the panic buying (or "pantry loading", as he put it) will be a net positive for supermarkets, as long as supply chains can hold up.

"They have to adapt their supply chain to fit with these sales spikes that are happening on the back of the virus, so as long as they can handle that, it will be a positive," he said.

Both analysts also predict the frenzy to be a net positive for both Coles and Woolworths earnings before interest and tax (EBIT), with Citi's Woolford forecasting a $15 million to $30 million bump in Coles' full-year EBIT.

I don't think I've ever seen anything that's created such a buzz in the industry and such concern from consumers.

But both also warned it may be a case of robbing the fourth quarter to pay the third, with corresponding sales set to droop towards the end of the financial year as consumers draw down on their stocked shelves.

"Most of these products being stockpiled aren't going to be consumed at a faster rate," Woolford says. "It's obviously going to lead to a spike in the March quarter and a softness in the June quarter."

However, all sectors of retail are not equal in the eyes of stockpiling consumers. Discretionary merchants, such as Myer, JB Hi-Fi and Noni B, are set to be the hardest hit by the pandemic as shoppers curtail all non-essential spending.

Any stores relying on shoppers browsing in malls will "clearly be negative" Woolford says, but the analyst is quietly hopeful a combination of low interest rates, petrol prices and the government's $750 payment to welfare recipients could help spending rebound.

"The only variable left to debate is whether they choose to spend or save it, and it's going to a part of the economy where people tend to spend," he said. "But it's certainly still a bit uncertain, and it may not flow through as quickly as [the government] likes."

For Ranieri it's mostly business as usual and the chief executive is trying to keep a level head despite the constantly changing environment.

"I'm trying to think of ourselves as a public utility right now, and how would we be thinking if that were the case," he said. "How do you run a company like ours in a pandemic?"