Steeling for a rebound: BlueScope delivers a large jump in guidance

Australia's biggest steelmaker BlueScope has lifted its first half earnings guidance by a hefty 39.7 per cent to $475 million, citing stronger home building and alterations activity, demand for large warehouse and logistics facilities and a recovering US car industry.

The increase also includes a contribution of about $40 million generated by the recent sale of an industrial warehouse complex in the US that was developed by the BlueScope Properties Group. 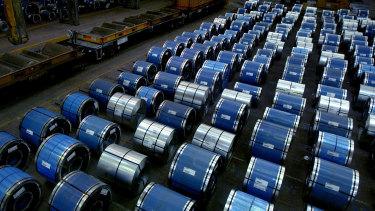 BlueScope said its business was rebounding firmly through the half.Credit:Bloomberg

The ASX-listed $8.5 billion business, which has a corporate headquarters in Melbourne and operations around the world, released the updated guidance shortly before its annual shareholder meeting, to be held virtually this morning.

The healthy update comes less than a month after BlueScope released earlier guidance for the first half of the 2020-21 financial year, forecasting underlying EBIT (earnings before interest and tax) of about $340 million, which would have been an increase of about 30 per cent on the actual EBIT result for the COVID-19 hit June half of the 2019-20 financial year.

"All operating segments are performing well and momentum has continued to build as we approach the end of the first half. Residential alterations and additions activity, demand for detached new housing, and growth in demand for e-commerce warehouse and logistics facilities are all robust and US automotive industry demand is recovering strongly," said BlueScope chief executive Mark Vassella.

"Demand strength, particularly in the Australian market, has continued to outpace our expectations. We now expect that Australian construction and manufacturing activity will remain strong," he said.

The company said steel margins in the US Midwest and in East Asia were above long term averages, while the steelmaker's Australian division is tipped to deliver a substantially better result this half than for the last half of 2019-20.

In the US, BlueScope's large North Star mill is dispatching at full capacity, with the company saying that demand from the US automotive industry was returning to normal. Meanwhile, US steel margins have been assisted by more stable raw material costs.

After a first half interrupted by COVID-19 disruptions BlueScope said its building products Asia and North America segment was expected to deliver a significantly stronger performance in the current half than in the last half of 2019-20.

In August BlueScope reported a full year 2019-20 statutory net profit of $96.5 million, bumped down by a $197 million write-down of its New Zealand division, the impact of COVID-19 on some markets and lower steel prices. It recorded underlying EBIT for the year of $564 million.