Embattled satellite communications group Speedcast has flagged a coronavirus-induced hit to earnings for the current year and conceded an equity raising to alleviate its significant debt issues is not an option in the current environment.

The trading update released to the ASX on Wednesday said the virus has had a "substantial impact" on one of its core markets, cruise liners, and as a result the company is "not yet able to provide a reliable outlook for the performance of the business" for the current financial year, which ends on December 31. 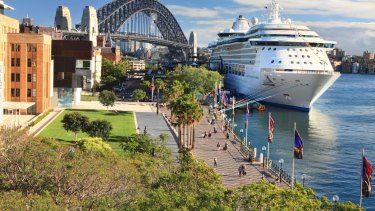 The company also said Moelis is advising it on funding and recapitalisation alternatives given the fact that current equity market conditions preclude a meaningful equity raising.

"Obtaining additional funding will provide Speedcast with the opportunity to engage in meaningful discussions with its lending group and suppliers as part of an overall longer-term recapitalisation of the business," the company said.

It said the board is continuing to pursue non-core asset sales to reduce debt where it is material and beneficial to the company.

Speedcast shocked the market last August with a $175.6 million loss, which led its auditors to warn about the "material uncertainty" over its ability to continue as a going concern due to the loss, cash outflows and a $US655 million ($1.1 billion) debt load.

The company has been in a trading halt since February 3, when it announced a downgrade for the 2019 financial year and a board-level review of "all elements" of the financial accounts for that year, which triggered the departure of chief executive PJ Beylier.

The board said it is now determining whether the 2019 result should include non-cash writedowns and "additional market disclosure".

"The board continues to work with the management team to fully review all elements of the FY19 result, and expects to finalise this review soon," the company said.

At this stage, it expects 2019 financial year earnings before interest, tax, depreciation and amortisation (EBITDA) before significant items in the range of $US110 million to $US121 million.

The company has stabilised its executive team, with the permanent appointment of Peter Shaper as chief executive and Joe Spytek as chief commercial officer.

Last month, Speedcast had its debt downgraded by S&P which said its "capital structure is unsustainable" and flagged that proposed asset sales might not be enough to alleviate liquidity concerns.

"We believe that Speedcast's aggressive growth strategy, cost cutting and failure to effectively integrate prior acquisitions have eroded the quality of its earnings and cash generation," said S&P.