Some in Michigan push to be latest state to join Popular Vote Compact, reject Electoral College

Michigan has experienced being a battleground and non-battleground state in the same election cycle, recalled former state Republican Party Chairman Saul Anuzis, referring to when 2008 GOP nominee John McCain closed shop there to devote resources in states where he was more competitive.

“Once McCain pulled out, our victory centers closed, all of our funding went away, volunteers walked away and voters just stayed home,” Anuzis, now advocating a referendum for Michigan to join the National Popular Vote Interstate Compact, told Fox News. “The presidential campaign is always a draw in the presidential year. When you announce it no longer being relevant, your turnout drops. That cost us two congressional seats, nine state legislative seats, it really had a devastating effect in the state.”

That’s what Anuzis said drew him to the campaign for the National Popular Vote Interstate Compact. States in the compact commit their electors to the national vote winner, regardless of who carries the state. Since 2006, the compact has gained 15 states and the District of Columbia, with 195 electoral votes so far. However, that commitment won’t kick in until the compact has enough states for the needed 270 electoral votes to win. 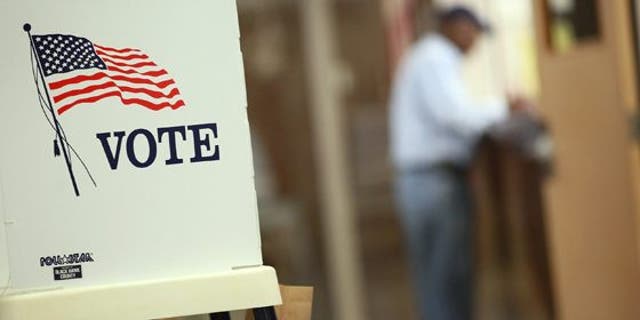 Voting booths are set up for early voting at the Black Hawk County Courthouse on September 27, 2012 in Waterloo, Iowa. Currently, states that are a part of the National Popular Vote Interstate Compact commit their electors to the national vote winner.
(Scott Olson/Getty Images)

TRUMP, BIDEN, NOT ON THE BALLOT, BUT CENTER STAGE IN VIRGINIA GUBERNATORIAL SHOWDOWN

Anuzis and former Michigan Democratic Party Chairman Mark Brewer launched the “Yes on National Popular Vote” ballot initiative last week to add Michigan’s 15 electoral votes to the compact. The initiative has to collect 340,047 Michigan voter signatures in 180 days to appear on the 2022 ballot.

Also last week, Michigan state Rep. Matt Koleszar, the Democratic vice chair of the House Elections and Ethics Committee, introduced legislation to be the 16th state to join the popular vote compact. The bill mirrors the language of the ballot initiative.

“Michiganders must be assured that their voices are heard equally, and a national popular vote ensures one person, one vote,” Koleszar said in a statement.

The Republican majority in the Michigan Legislature is unlikely the pass the Koleszar bill, so a ballot initiative is likely the best hope for popular vote backers.

If the Michigan petition drive is successful, it would mark only the second time voters made the determination. In 2020, Colorado voters decided on a vote of 52% to join the popular vote compact, short of the 57% that backed Joe Biden over Donald Trump in blue Colorado. That indicates that even though support for the Electoral College in recent years has broken along party lines, a decisive majority could be a challenge.

Convincing voters in Michigan to give up the perks of being a battleground state is a tougher sell, said Trent England, executive director of Save Our States, a pro-Electoral College group.

“Michigan would clearly be a loser under a national popular vote just for the reason that they get a lot of attention from candidates,” England told Fox News. “Obviously, that would change with a national popular vote. The National Popular Vote campaign likes to pretend every state would be a swing state and every state would get that much attention. The only way that’s really possible is if the political campaigns raise and spend 100 times more money than they raise and spend today. So Michigan would lose big time.”

In 2019, Nevada’s Democratic Gov. Steve Sisolak vetoed the popular vote measure, contending as a smaller state, Nevada has leverage under the Electoral College. That same year, the Maine state Legislature rejected a bill to join the interstate compact on a bipartisan vote.

“The reality is, they’ve run out of states where they can pass this through the legislature,” England said. “They’ve had some support in Michigan in the past and a lot of those supporters have changed sides and are now opponents of national popular vote. There is no prospect of passing NPV in the Michigan legislature. This is kind of their Hail Mary to try to take this to voters and see if they will pass it.”

WITH FOUR WEEKS TO GO UNTIL VIRGINIA ELECTION, CLOSE CONTEST IN RACE WITH NATIONAL IMPLICATIONS

Anuzis anticipates Michiganders will be receptive because they know “battleground status is fleeting,” noting the once fierce swing states of Ohio and Florida seem to be solidly red now.

“It’s not like your battleground status is forever. What’s unique about this proposal is that every voter in every state is politically relevant every time,” Anuzis said. “So, from Michigan’s standpoint, we don’t lose anything.”

The states are all solidly blue, and Democrat skepticism for the Electoral College emerged after George W. Bush won the presidency in 2000 and Trump won in 2016 despite both losing the popular vote. Three other presidents, Benjamin Harris in 1888, Rutherford B. Hayes in 1876, and John Quincy Adams in 1824, also won without the popular vote.

Anuzis said the compact preserves the Electoral College and the rights of states to choose how to award their electors. Further, he said it’s a myth that moving to a popular vote would advantage Democrats over Republicans.

Voter turnout is up to 15% higher in swing states, but under an NPV model, Anuzis said, GOP voters in deep blue states – or Democrat voters in deep red states – are more likely to turn out.