Snap plunged 43 per cent, posting its biggest-ever one-day drop and dragging down social media peers, after the company cut its revenue and profit forecasts, blaming the weaker economic outlook for a sudden slowdown of its advertising business.

“We continue to face rising inflation and interest rates, supply chain shortages and labour disruptions, platform policy changes, the impact of the war in Ukraine, and more,” chief executive Officer Evan Spiegel said in a note to staff on Monday. The company will also slow hiring. 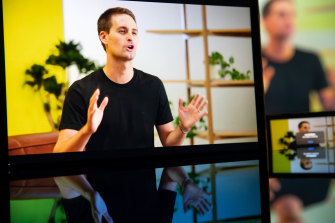 Snap’s Evan Spiegel said the company is facing headwinds on many fronts.Credit:Bloomberg

The gloomy forecast was a sharp pivot from the tone struck last month in Snap’s first-quarter earnings report, when the company beat projections for user growth and said it planned to keep investing through the economic headwinds to keep up its business momentum.

“The macroeconomic environment has deteriorated further and faster than anticipated,” Snap said late Monday in a filing. “As a result, we believe it is likely that we will report revenue and adjusted Ebitda below the low end of our Q2 2022 guidance range.” The company’s second-quarter revenue forecast, for 20 per cent to 25 per cent year-over-year growth, was already below analysts’ estimates.

Snap fell to $US12.79 at the close in New York on Tuesday, well below its initial public offering price of $US17 a share in 2017. The collapse in the stock spread to other internet and social networking stocks, with Meta falling 7.6 per cent, Google parent Alphabet slipping 5 per cent and Twitter dropping 5.6 per cent. In total, social media stocks shed more than $US135 billion ($190 billion) in market value following Snap’s dour forecast.

Snap had benefited from a surge in usage of its Snapchat app during the pandemic, when people were looking for entertainment and connection from their homes. Now, as people return to offices and schools, the company is reeling from the same combination of economic pressures that are also beleaguering its competitors.

Internet platforms are all competing for ad dollars at a challenging time. Advertisers are facing a shaky economy as well as recent privacy changes, such as Apple’s tracking restrictions, which have slowed businesses that were booming during much of the pandemic.

The companies “are having to bring these unattainable, unrealistic investors’ expectations back down to Earth,” said Dan Suzuki, deputy chief investment officer at Richard Bernstein Advisors, on Bloomberg Television Monday. “Underlying growth is slowing as these companies mature and it gets more competitive.” Suzuki’s firm, which has about $US15 billion of assets under management, doesn’t hold Snap stock directly.

Facebook parent Meta last month cut spending because of the economic environment. Twitter recently announced a hiring freeze and other cost-cutting measures to try and save cash.

“The global macroeconomic environment has become less favourable, the war in Ukraine has impacted our results, and may continue to do so,” Twitter chief executive officer Parag Agrawal said in an email to employees.

“Many other companies have been experiencing a similar effect.” 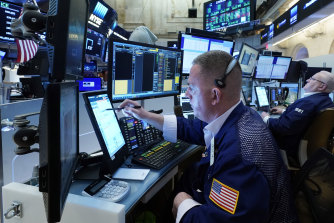 Snap’s Spiegel told staff that company leaders have been asked to review spending, to see if there are any other areas worth cutting. “Our most meaningful gains over the coming months will come as a result of improved productivity from our existing team members,” he wrote.