With President Trump likely set on Wednesday to become the only president ever impeached twice, Democrats were pressuring Senate Majority Leader Mitch McConnell, R-Ky., to invoke a 2004 resolution that could bring the Senate back quickly for what would essentially be an emergency session to begin the impeachment trial as soon as possible.

But McConnell’s office said Wednesday that it will not invoke the resolution, meaning that any impeachment trial almost certainly will not start until Trump has left office.

McConnell, R-Ky., issued a memo to Republican senators earlier this week saying that the Senate would not be able to reconvene for business until Jan. 19 without the consent of all 100 senators. This would mean, in effect, that the earliest an impeachment trial for Trump could begin is 1 p.m. on Jan. 20, an hour after President-elect Biden is inaugurated. It’s almost certain a Trump loyalist senator would object to bringing the Senate back early.

But a senior Democratic aide said earlier this week that Senate Minority Leader Chuck Schumer, D-N.Y., was exploring the possibility that a 2004 resolution gives the two party leaders in the Senate the authority to call the Senate back into session. This would mean that Schumer would only have to convince McConnell to bring the Senate back. 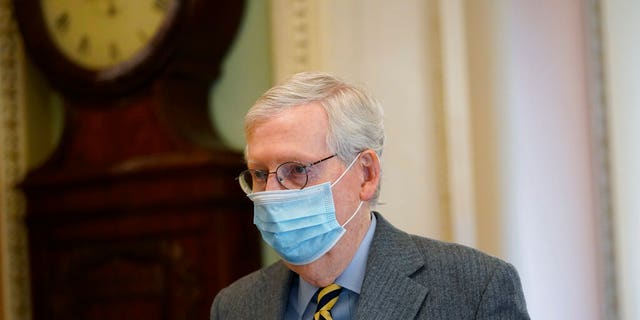 In this Dec. 30, 2020, file photo Senate Majority Leader Mitch McConnell of Ky., walks to the Senate floor on Capitol Hill in Washington. McConnell will be under a microscope if the House impeaches President Trump Wednesday. (AP Photo/Susan Walsh)

The 2004 resolution “[a]uthorizes the majority and minority leaders… when the Senate is out of session, acting jointly and within the limits of the Constitution, to modify any order for the time or place of the convening of the Senate when, in their opinion, such action is warranted by intervening circumstances.”

House Rules Committee Chairman Jim McGovern, D-Mass., on Wednesday explicitly brought this possibility up during debate on the rules for House debate on Trump’s impeachment.

“I want to be clear about one thing. If we vote to impeach the president today and we sent it over to the Senate… there is nothing to prevent the Senate from taking it up immediately if Senate Majority Leader Mitch McConnell decides he wants to proceed,” McGovern said. 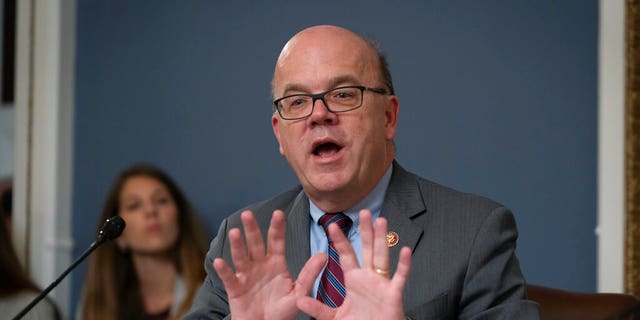 House Rules Committee Chairman Jim McGovern, D-Mass., presides over a markup of the resolution that will formalize the next steps in the impeachment inquiry of President Donald Trump, at the Capitol in Washington, Wednesday, Oct. 30, 2019. (AP Photo/J. Scott Applewhite)

“The fact of the matter is, Mr. Speaker, there is no reason to rush forward like this other than the very obvious fact that there are only seven days left until the new president takes office,” Cole said. “What’s worse… because of the Senate rules, the case can not come to trial in the Senate until 1 p.m. on Jan. 20 — one house after President Trump leaves office. This is an ill-advised course, in my opinion.”

Cole’s argument is a common one among Republicans who say they are upset by Trump’s actions in the lead-up to the storming of the Capitol by his supporters, but who do not want to advance an impeachment during the very twilight of his term.

But with McConnell’s office now saying that it will not consent to bring back the Senate early, no matter when the House attempts to send over the articles, the Senate will not be able to begin a trial until at least Jan. 20.

The Senate will meet for a handful of “pro forma” sessions before Jan. 19, but it is not able to do business during those meetings.

McConnell, however, is reported to be “done with Trump” and has shared with associates that he thinks a second impeachment could help the GOP exorcise Trump and Trumpism from the GOP.

McConnell has also not made any decision on how he would vote in an impeachment trial, according to sources. But he is upset with the president over his actions that led to the storming of the Capitol and Trump’s rhetoric on the election ahead of the Georgia Senate runoffs. A source very close to McConnell also says the majority leader does not see this new impeachment as partisan like the previous effort that centered around Trump’s actions in regard to Ukraine.