New York (CNN Business)The rocket that flew Jeff Bezos to space last month just took another brief, suborbital jaunt to the upper reaches of the atmosphere, this time without people on board, as the company continues to test the vehicle and prepare to offer rides to other ultra-wealthy thrill seekers.

It marked the 17th test flight for New Shepard, the suborbital rocket developed by Bezos’ Blue Origin. The 60-foot-tall vehicle took off from a small launch pad at Blue Origin-owned facilities in West Texas Thursday morning, carrying only a few science experiments and pieces of art rather than passengers, and soared more than 60 miles over the landscape before coming to a pinpoint, upright landing at a nearby concrete pad.
The initial launch had been delayed by an hour due to what Blue Origin said was “a payload readiness issue,” however the rest of the flight did not initially appear to be significantly impacted by the wait.

New Shepard’s uncrewed, suborbital test missions have also frequently included experiments, and on Thursday’s flight it flew a “lunar landing technology demonstration” on behalf of NASA. Basically, Blue Origin put a set of sensors and computer algorithms on the New Shepard rocket, testing technology could one day be used for navigating a lunar lander.

New Shepard attracted global attention last month when Bezos — along with three other passengers — became the first humans to ride aboard the rocket, which had until then only conducted uncrewed test flights.

Bezos gushed about his experience after the flight, saying “Oh my God! expectations were high, and they were dramatically exceeded.” But Wally Funk — one of the “Mercury 13” women who was previously denied the opportunity to go to space but flew alongside Bezos as an “honored guest” last month — had praise for the experience as well, but she added: “I saw darkness. I thought I was going to see the world but we weren’t quite high enough,” Funk added in the post-flight press conference.”
Blue Origin’s suborbital tourism flights travel more than 60 miles high, which is broadly considered the point at which outer space begins. But even the International Space Station, which orbits more than 200 miles above ground, is not far enough away to offer holistic views of the Earth.
Though Thursday’s flight was uncrewed, Blue Origin said it is still planning up to two more crewed flights this year.
Bezos plans to use the New Shepard rocket for a suborbital space tourism business, competing directly with Richard Branson’s Virgin Galactic, which developed an air-launched, rocket-powered space plane. (Branson took his own flight to the edge of space just days before Bezos’ flight last month.) 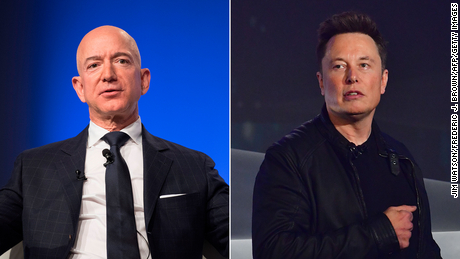 Both companies plan to open for business in the coming months, allowing anyone who can afford it the chance to book a seat on the companies’ respective spacecrafts and enjoy a quick up-and-down flight that offers panoramic views of the Earth and a few minutes of weightlessness.
Virgin Galactic had already sold about 600 tickets for around $200,000 before closing down ticket sales in 2014. The company recently reopened ticket sales at $450,000 a piece.
Blue Origin has not named a price point for its tickets, though at least one ticket was sold at auction for $28 million. The company has directed other potential customers only to fill out an online form.
Space tourism is a small but potentially lucrative sub-sector of the space industry, and UBS predicts it could be a $4 billion-per-year business by 2030. 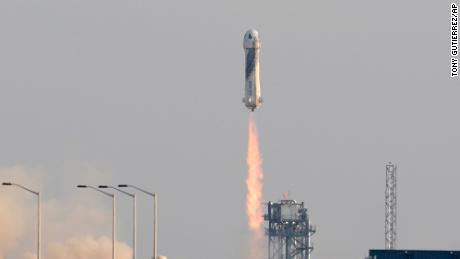 Blue Origin also hopes to parlay the technology it developed for New Shepard into a spacecraft capable of landing on the moon. Bezos has said the the rocket’s engines, which are capable of making precise adjustments to the amount of force they give off, have helped inform how the company might use thrusters — or small engines — to make a soft touchdown on the lunar surface.

But Blue Origin’s dreams of landing a human on the moon have hit a significant road block. Earlier this year, NASA announced that it was giving a multibillion-dollar contract to SpaceX to build a lunar lander, sidelining Blue Origin from a contract it desperately hoped to land.
Blue Origin has fought back. After losing its first attempt to overturn the decision, the company sued the federal government, claiming that NASA’s decision-making was “flawed.” A decision in that case is due in November.
Source: Read Full Article