Shortly before Jeff Bezos flew to space in July, “Good Morning America” host Michael Strahan was one of the few journalists who got to ask the billionaire directly why he was going. Little did the public know that Strahan would be offered the same opportunity a few months later.

“Being there at the first launch… it really was mind blowing,” Strahan told his GMA co-anchors last month when he publicly revealed that Blue Origin had tapped him to fly on the next space launch, scheduled for Saturday. “I do believe that [space travel] will bring a lot of technological breakthroughs and also innovations to us here on Earth, and I just wanted to be a part of it.”
And so too have other journalists over the years. The idea of an American journalist going to space has been in the works since Strahan was a teenager, but several attempts were thwarted. In 1990, a Japanese TV reporter became the first journalist to travel to space. Much has changed in the industries of space exploration and of media, but the significance of sending an American journalist to space for the first time still resonates.
“I can’t think of too many other beats in what we do as journalists where we are covering something we cannot visit,” said Miles O’Brien, an aerospace analyst for CNN and science correspondent for PBS NewsHour. “I think having that ability as a reporter to experience and relay that to an audience would be a great privilege. I would go in a heartbeat.”

Nearly four decades before Bezos offered Strahan a ride to the edge of space, NASA was hashing out its own plans to send a scribe to orbit aboard a Space Shuttle mission.
By late 1985, the Shuttle program had more than 20 orbital flights under its belt, and NASA was hoping to capture the public’s imagination by sending regular civilians on a mission. It would be the ultimate sign that space travel had become a routine endeavor, and the cosmos was opening up for everyday people to explore.
A couple politicians had joined shuttle flights. And Christa McAuliffe, a high school teacher from New Hampshire, had been selected from a pool of more than 11,000 applicants to be the first private citizen in space. Space journalists of the day felt they had a “divine right” to be among the first civilians in space as well, as Alan Ladwig, former manager of NASA’s Space Flight Participant Program, put it in his book “See You in Orbit?”
Ladwig’s team set up the Journalists in Space program in October 1985. NASA picked the Association of Schools of Journalism and Mass Communications (ASJMC) to lead the selection process. 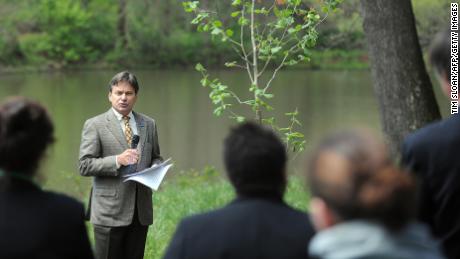 Calls were made in op-eds and private conversations to ensure the winner would maintain journalistic independence, allowing this person to report from space with a scrutinizing eye unfiltered by NASA’s PR team. The flight would be offered for free — something some journalists took qualms with based on ethical, conflict-of-interest concerns.
“If you take that flight, you are by definition to some extent in NASA’s pocket. How objective could you possibly be?” CBS News space consultant Bill Harwood told CNN Business. “I had mixed feelings about it.”
“I remember having those conversations,” Harwood continued, “that whoever flies this flight a) is going to have a wonderful opportunity. They’re going to have a great story. Everybody’s going to see their work, but b) are you somehow compromised by doing it because it is such a singular thing? You are totally beholden to the people you’re covering.”
Strahan will face the same issue with his flight. He’ll get his seat free of charge, flying as one of Blue Origin’s “honorary guests.”
Back in the 1980s, more than 1,700 reporters applied, from celebrity newscasters Walter Cronkite, Tom Brokow and Dan Rather to journalists from small, local newsrooms. Harwood said he was not qualified to apply since he had less than five years of professional journalism experience at the time.
Cronkite, then 69 years old, said at the time that he was unsure he could pass a NASA physical, but “there ought to be a great advantage to prove that any old fart can do it,” The Washington Post reported.
But then, McAuliffe’s flight — and the entire Space Shuttle program — took a dire turn. Just over a minute after McAulliffe and her crewmates took off aboard the Space Shuttle Challenger on January 28, 1986, an explosion occurred, destroying the the spacecraft and killing all seven passengers.
The nation was in mourning. Investigations were launched. Then-President Ronald Reagan was defiant, pledging in an address from the Oval Office that “there will be more shuttle flights and shuttle crews and, yes, more volunteers, more civilians, more teachers in space.”
That, however, didn’t exactly pan out. The Teacher in Space Project was canceled.
The Journalist in Space program was canceled, too, shortly thereafter, even though the ASJMC had winnowed its field of applicants down to 40 finalists, which included Cronkite and other journalists from national and local outlets.

"As soon as Challenger went down you knew that was over. There was never any question. A school teacher just died on national television. There was no way that it was suddenly going to be okay for a journalist to fly."

“As soon as Challenger went down you knew that was over,” Harwood said. “There was never any question. A school teacher just died on national television. There was no way that it was suddenly going to be okay for a journalist to fly.”
A new wave of journalists moved in to cover the space program, this time with renewed willingness to challenge and question NASA on its safety practices, Ladwig said.
The desire to go to space, for most journalists, “completely disappeared,” said Irene Klotz, the space editor for Aviation Week.
“Everything then was just focused on what happened and how to recover from it and how to return to flight,” Klotz told CNN Business. The Space Shuttle program moved on, but civilian flight programs did not.

The Cold War and commercialization

In 1990, however, as the Cold War began to thaw, a Japanese television station — Tokyo Broadcasting System — decided to fork over $10 million to secure a ride to the Soviet-controlled Mir space station for one of its anchors, Toyohiro Akiyama. He’d become the first Japanese person and the first journalist ever to travel to space.
American journalists were outraged, Ladwig said.
They “just went nuts,” he said. “It was like, I can’t believe that we’re not going to be the first.”
Akiyama, then 47, spent nine days in space, feeding live — and unvarnished — broadcasts back to the ground between bouts of extreme nausea brought on by motion sickness, a common ailment frequently reported even by professional astronauts.
At the time, The Washington Post reported Akiyama, “seems to have a new complaint every day.”
“He has no appetite. He needs a smoke. He’s dizzy because all the blood settled in his head. The liftoff felt like ‘riding a dump truck down a rocky road.’ It’s hard work going to the bathroom without gravity to help,” The Post wrote in 1990. “His stomach feels like it’s standing straight up. His head feels like it’s floating away. He badly needs a [cigarette].” 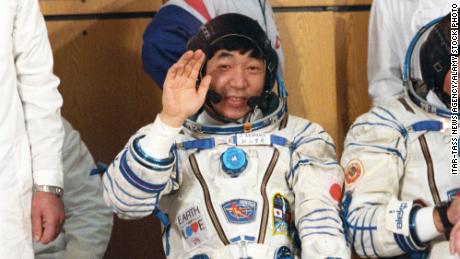 It was a stark contrast to the occasionally stoic, often technical accounts of space travel relayed by professional astronauts.
Akiyama’s mission — though perhaps not the best advertising — was seen as a step forward in commercializing the Soviet space program. One columnist in the British magazine New Scientist in 1991, called on Western nations to embrace privatized space travel, noting it was “true irony” that the Soviet Union had done so first.
Nearly a decade later, O’Brien was working to convince NASA and his employer at the time, CNN, to send him to space. It was a goal his CNN colleague, John Holliman, had before he died in a car accident in 1998, O’Brien said.
“I felt almost obligated to pick up the ball and keep plugging away,” O’Brien told CNN Business.
CNN hashed out a deal with NASA to put O’Brien on a Space Shuttle flight, pledging to donate reportedly a seven-figure sum to an organization such as the Challenger Learning Centers in exchange.
Reporters who enrolled in NASA’s defunct Journalists in Space program were again left out of the equation.

"It was a horrible day on so many levels, but the thing I couldn't really share with anybody was that I knew in an instant that was the end of my dream."

“That did not go over well,” Ladwig said. “Forty people went through this big selection process and then NASA Administrator decides ‘No, I’m going to fly Miles [O’Brien]’ … They were not happy about that at all.”
But the Shuttle program was thrown into limbo yet again when the Space Shuttle Columbia was torn apart during reentry on February 1, 2003, killing seven astronauts.
“I was on the air for 16 hours that day,” O’Brien said. “It was a horrible day on so many levels, but the thing I couldn’t really share with anybody was that I knew in an instant that was the end of my dream.”

NASA’s Shuttle program has been retired for a decade, and the space industry has been commercialized. Bezos, Elon Musk and Richard Branson are among the billionaires building rockets to take paying customers on spacefaring joyrides — pledging to make good on earlier promises of sending everyday people on extraterrestrial adventures.
Civilian space tourists now include Oliver Daemen, a recent high school graduate, Hayley Arceneaux, a childhood cancer survivor and St. Jude Children’s Research Hospital physician assistant and actor William Shatner.
Next, it’s Strahan.
Prior to his career in morning television, Strahan was a celebrated professional football player who spent all 15 years with the New York Giants before retiring in 2007. 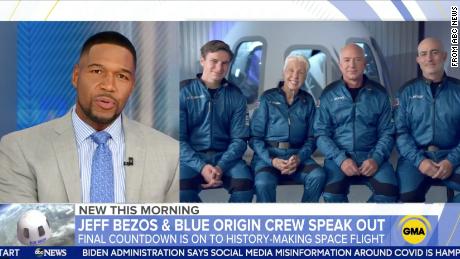 On a recent GMA segment from his first day of training camp for his upcoming Blue Origin flight, Strahan joked about his football experience.
“I’m nervous as a rookie in training camp for the Giants today,” Strahan said. “I got to say I’ve done a lot of training camp, 15 years of training camp or 14 because I sat out my last one for football, but this is definitely some training.”
Strahan elaborated on his decision to go to space on an earlier GMA segment.
“I guess I kind of want to take a trip that’s outside of this world. I just want to see the world or the planet from outside of itself,” Strahan said. “I think it’s gonna be fun. I think it’s gonna be epic. I just think it’s going to be something that I’ll have a chance to experience that just very few will, so that’s why I want to do it.”
Given Strahan’s title as an “honorary guest” on the Blue Origin trip, he may not be in a position to be an objective stenographer. And Blue Origin passengers are bound by non-disclosure agreements, preventing them from discussing ticket prices and certain other aspects of their experience. GMA declined to make Strahan available for comment.
When explaining the arrangement to his GMA co-anchors on air last month, Strahan said Blue Origin “approached me and they asked if I wanted to be a crew member, and without hesitation, I said, ‘Yes.'”
Though Strahan may not be a hard news reporter like Cronkite or an expert space journalist, O’Brien told CNN Business that he sees value in sending someone like the former football player turned TV personality into space.

“To the extent that [Strahan] can communicate in an everyman way what that experience is like, I think it’s a great opportunity,” O’Brien said.
Source: Read Full Article