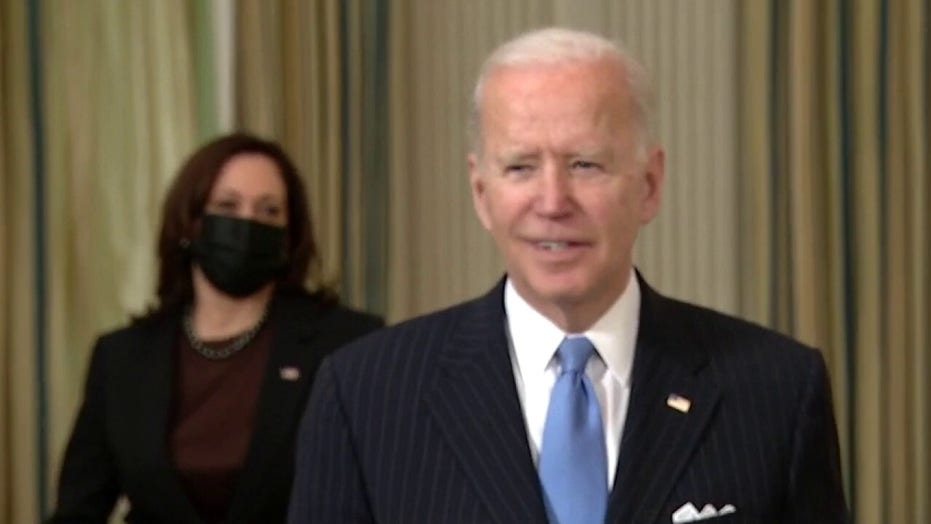 Will $1.9T COVID stimulus do more harm than good?

Senate Majority Leader Chuck Schumer said Tuesday it was a “mistake” for Democrats to work with Sen. Susan Collins during the early Obama years and that President Biden didn’t think Republicans “were being serious” in coronavirus relief negotiations.

The comments from Schumer, D-N.Y., made during an interview on CNN, were amplified by White House Chief of Staff Ron Klain, who retweeted a post about the interview by NBC’s Sahil Kapur.

“No, you know, we made a big mistake in 2009 and 2010,” Schumer told Anderson Cooper. “Susan Collins was part of that mistake. We cut back on the stimulus dramatically and we stayed in recession for five years.”

Collins, R-Maine, was the leader of a GOP delegation to the White House that aimed to negotiate with Biden on what a bipartisan coronavirus plan could look like. Their opening offer would have cost $618 billion, significantly smaller than the $1.9 trillion plan that President Biden initially proposed.

The White House responded to the Republicans’ proposal with a statement that said Biden would not “slow down work on this urgent crisis” or “settle for a package that fails to meet the moment” for the sake of bipartisanship.

A $1.9 trillion bill along the lines of Biden’s initial proposal is expected to be passed through Congress and signed by the president in the coming days. Democrats forced through the bill under a process called budget reconciliation, which allowed them to circumvent a filibuster in the Senate and pass the bill with no Republican votes.

Schumer’s statement — and the fact it was retweeted by Klain, who holds the most critical staff position in the White House — raises questions about the sincerity of the pleas for unity from Biden and the desire of the administration to work with Republican members of Congress.

“I thought that leader Schumer’s comments were bizarre. He voted for the same package that I did,” Collins said when asked about Schumer’s interview on Wednesday. ” I think it reflects regrettably his inability to accept the fact that despite pouring $100 million into defeating me, the people of Maine, said, no. And reelected me to a historic term.”

Collins also characterized her initial conversation about the $618 coronavirus bill as “productive” but said that Schumer “showed that he had absolutely no interest in trying to negotiate a bipartisan agreement despite our very sincere effort to put forward an initial package that could serve as the basis for negotiation.”

Despite the fact Democrats did not get any Republicans on board with their coronavirus stimulus, members of the administration including Klain himself have said that the stimulus is bipartisan because Americans of both parties support the bill.

BIDEN’S COVID-19 BILL HEADS BACK TO THE HOUSE: WHAT’S IN IT, AND WHAT’S OUT?

Also notable is the fact that the Great Recession technically only lasted until mid-2009 and the U.S. GDP recovered to its pre-recession levels by 2011, contrary to Schumer’s comment. This steady recovery was often touted by Democrats who criticized former President Donald Trump for taking credit for the success of his predecessor, former President Barack Obama.

“I didn’t realize the Democrats thought the Obama presidency was such a failure,” Collins’ spokeswoman Annie Clark said of Schumer’s comment.

But the U.S. unemployment rate did take approximately five years to recover to approximately its pre-recession levels under Obama.

The pre-recession unemployment rate was as low as 4.4%, but it didn’t dip back below 6% until 2014 and didn’t fall below 5% again until 2016. Republicans blamed this slow job recovery on anti-growth policies by Obama, whereas Democrats have said it is because the government didn’t spend enough money in 2009 and 2010.

Senator Susan Collins (R-ME), speaks during a US Senate Health, Education, Labor, and Pensions Committee hearing to examine covid-19, focusing on an update on the federal response in Washington, DC, on September 23, 2020. (Photo by ALEX EDELMAN/POOL/AFP via Getty Images)

Biden’s also taken credit for Collins’ vote on the Obama stimulus as recently as last month, pointing to his efforts as positive evidence of his ability to make deals. Collins was one of three Republicans to vote for the stimulus bill and Obama called her personally to thank her for her vote, Fox News is told.

But Biden in the same breath also made a similar point to what Schumer said on CNN Tuesday.

“I did everything I could to get it passed including getting three Republicans to change their votes and vote for it,” Biden said last month of the 2009 stimulus. “But it wasn’t enough. It wasn’t quite big enough. It stemmed the crisis, but the recovery could have been faster and even bigger. Today, we need an answer that meets the challenge of this crisis, not one that falls short.”

Biden added: “What Republicans have proposed is either to do nothing or not enough. All of a sudden, many of them have rediscovered fiscal restraint and the concern for the deficits. But don’t kid yourself — this approach will come with a cost: more pain for more people, for longer than it has to be.”

The White House did not respond to a Wednesday morning inquiry about whether Biden agrees with Schumer that engaging with Collins in 2009 was a mistake.

Collins has said that she opposes the Democrat and Biden-backed coronavirus bill because it contains many provisions that aren’t related to the virus and Democrats weren’t willing to engage Republicans in negotiations.

“Democrats chose to ram through a partisan bill using a partisan process. The only thing bipartisan about this package was the opposition in the House,” she said. “Under the guise of providing COVID-19 relief, the Democratic leaders proposed a bloated $1.9 trillion package stuffed full of provisions that have nothing to do with fighting the coronavirus, from either a public health or economic perspective.”

Meanwhile, Klain on Wednesday shared another post bragging about the fact Biden’s coronavirus bill was “rammed’ through Congress without Republican buy-in.

“Obama spent much of his first year in office seeking bipartisan buy-in for the ACA,” New York Magazine writer Eric Levitz said in a tweet, quoting an article he published Tuesday. “Biden just slapped the bulk of his healthcare plan on top of a 1.9 trillion relief bill and rammed it through Congress before his administration’s two-month anniversary.”

The president entered office with promises of “unity” and a vow to “lower the temperature” of political discourse. He’s expressed a desire to work with Republicans on high-profile legislation, any such bipartisanship has yet to materialize.

In fact, White House Press Secretary Jen Psaki on Tuesday refused to take the possibility of using the reconciliation process to circumvent Republicans on an infrastructure package off the table.

The main serious area of bipartisanship in Washington since Biden was inaugurated has the Senate votes for the president’s Cabinet nominees. The Senate is expected to confirm Judge Merrick Garland to be the next attorney general and Rep. Marcia Fudge, D-Ohio, with significant bipartisan majorities on Wednesday afternoon.