Australia's struggling retail sector has been dealt yet another blow from the coronavirus outbreak, with essential fixtures and fittings for stores delayed for weeks as Chinese shipments stall.

Retailers both big and small have been hurt by the delay, which in some situations has prevented the opening of new stores at a time when retail trade is already significantly dented. 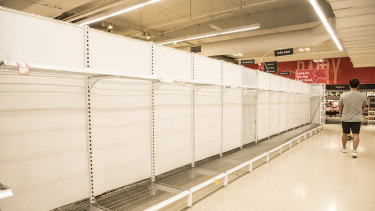 Forget toilet paper, some retailers are struggling to even find racks to store it on.Credit:Steven Siewert

Already reeling from the devastating summer bushfire crisis, the country's retail sector has been plunged into a new coronavirus malaise, with tourism, consumer confidence and supply chains all impacted.

Major retailers warned at their half-year results that supply for key products could see delays due to some manufacturing in China coming to a halt. However, it appears store fittings, such as display cabinets, lights and product racks, have become an unexpected victim.

Graham Terry, the managing director of major regional shopping centre landlord Retpro, told The Age and The Sydney Morning Herald fittings and fixtures had been a far greater problem for his tenants than supply issues or lower footfall.

"There's a lot of delays in fit-outs for our specialty shops. Refitting or opening stores has become a real headache," he said. "It's going to cause some issues with the majors as well. It's more of an issue than stock at the moment."

Both major supermarkets have flagged "non-material" delays in certain store fittings thanks to the virus, with Woolworths deferring non-essential fit-out works until supplies come back online.

The company has been drawing on equipment already stocked in warehouses to refit stores. Chief executive Brad Banducci told analysts fixtures were one of the few things Woolworths was experiencing delays in from China but noted it would be able to switch supply to other regions if required.

Coles said it had seen delays in refrigeration equipment being shipped out of China for store renewals. The company completed nearly 80 renewals in the first half of the financial year.

Australian Shop and Office Fitting Industry Association chief executive Gerard Ryan told The Age and The Sydney Morning Herald his members had alerted him to delays of up to three months for some fittings such as displays and lighting.

Mr Ryan said the delays could see some stores currently in the process of being refitted stay closed until new supply could be located, with few alternatives for the products able to be sourced from Australia.

"Most of the fittings come in from China nowadays, and just about all the lighting that comes into the country is from China," he said.

Some fittings and fixtures are also sourced from Italy, which on Tuesday was put in total lockdown in response to the virus outbreak.

"It's probably going to delay a lot of our industry for quite a while," he said. "It could potentially see businesses shut down."

"We're calling on government support to help businesses through these times because its certainly going to affect their cash flow."

Mr Terry warned it would seriously hurt retailers who want to refit an existing store and retailers handing over stores to new tenants. "It's going to cost landlords a lot of money," he said.