Former Gov. Gray Davis argues the U.S. should work ‘in a collaborative fashion’ with other countries on environmental matters.

Republicans are already targeting vulnerable Democrats in states like Texas and Pennsylvania, where many jobs depend on oil or natural gas, as President Biden recommits to the Paris climate a1greement and makes other reversals of his predecessor’s environmental policy.

“By rejoining the Paris Climate Agreement, President Biden indicates he’s more interested in the views of the citizens of Paris than in the jobs of the citizens of Pittsburgh. This agreement will do little to affect the climate and will harm the livelihoods of Americans,” Sen. Ted Cruz, R-Texas, wrote on Twitter earlier in January.

Many Democrats, including Rep. Abigail Spanberger of Virginia and Rep. Vicente Gonzalez of Texas, voted for H.R. 9, which would have required the U.S. to stick with the Paris agreement’s stipulations had it advanced further than the House of Representatives. Both Democrats won reelection by less than 3%, according to Ballotpedia. 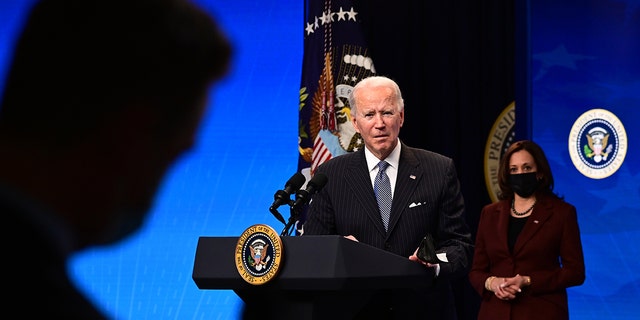 President Joe Biden with Vice President Kamala Harris answers questions from the media after signing a "Made in America" Executive Order in the South Court Auditorium at the White House on January 25, 2021, in Washington, D.C. (Photo by JIM WATSON/AFP via Getty Images)

Like Biden, Cartwright believes fossil fuel alternatives are the future.

“Natural gas is an important part of Pennsylvania’s economy, but we can create even more jobs in clean energy as the market continues to turn to cheaper and more innovative renewables,” Cartwright told Fox News in a statement. “Investing in modern, resilient energy infrastructure is a win-win for Pennsylvanians, and will put them back to work in good-paying union jobs.”

“I’m also looking forward to working with the President to create hundreds of thousands of jobs and clean up pollution by reclaiming dangerous abandoned coal mines and natural gas wells,” he continued.

But the gap between Green New Deal Democrats and their swing district colleagues could pose a problem for the party.

“The ongoing question for the next congress is what happens to people like Sen. Joe Manchin,” Daniel DiSalvo, professor of political science at the City College of New York, told Fox News. “Are they basically frozen out by more liberal forces within the Democratic Party and pushed to take a lot of tough votes that put them in tough positions? Or do the moderates and the centrists, are they able to assert themselves in some way, find a leader?”

Even before former President Donald Trump abandoned the Paris agreement, groups including the Global Energy Institute and conservative-leaning Heritage Foundation warned the climate accord could decimate jobs in the energy and industrial sectors. That was before the coronavirus pandemic created record-level unemployment rates.

“Based on regulations and emissions reduction targets set by the Obama administration, Heritage economists estimate that by 2035 there will be: an annual average loss of nearly 400,000 jobs, a total income loss of more than $20,000 for a family of four, and an aggregate GDP loss of over $2.5 trillion – all for a few tenths of a degree Celsius in abated warming,” Heritage Foundation economist Nick Loris said in a statement. 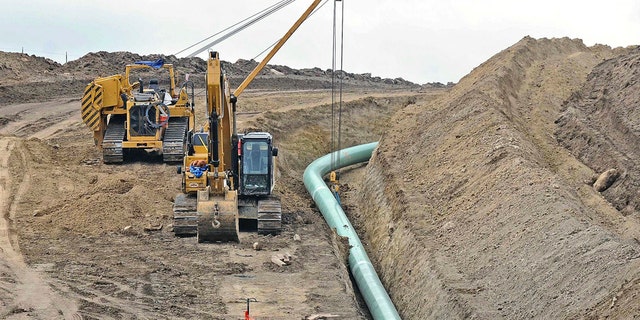 In this Oct. 5, 2016, file photo, heavy equipment is seen at a site where sections of the Dakota Access pipeline were being buried near the town of St. Anthony in Morton County, N.D. (Tom Stromme/The Bismarck Tribune via AP, File)

It is unclear how the Biden administration plans to address the job losses, but his $2 trillion clean energy infrastructure plan, with its goal of reaching net-zero emissions by 2050 at the latest, aims to “create millions of good-paying jobs that provide workers with the choice to join a union and bargain collectively with their employers,” according to his website.

The 2020 election was hardly a referendum on Biden’s policies, DiSalvo said. Trump’s and Biden’s contrasting personalities were front and center instead of the issues.

“One might say that overall the 2020 election was a Republican year, leaving aside Georgia,” DiSalvo said. “At every other level, Senate, House, state, the GOP did well and defied expectations. … Only at the presidential level could you say they underperformed.”

Republicans may not be able to advance their own energy policies in Congress, but they will be able to block a lot of Democratic action, DiSalvo said.

“Certainly, Senate margins are very close so to really gum things up … even if the filibuster went away … Republicans would only need two or three Democratic members to prevent action,” he said.

Fox News’ inquiries to the offices of Spanberger, Gonzalez, Wild, Lamb, Cuellar, Allred and Vela were not immediately returned.