Qantas has slashed almost a quarter of its international capacity due to weaker travel demand from the coronavirus outbreak, leaving all but two of its A380 aircraft grounded.

Australia's largest airline has been heavily affected by the drop in demand for global and domestic travel and the latest capacity cut representing a 23 per cent drop in international seats compared to this time last year. The cuts will remain in place until mid-September. 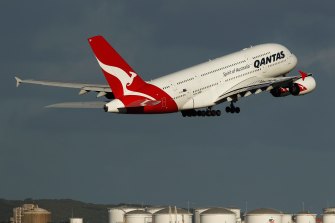 Just two A380s will remain in the air.Credit:Brendon Thorne

Chief executive Alan Joyce will not receive a salary for the remainder of the financial year while management will take a 30 per cent pay cut.

To avoid redundancies and job losses, the airline is asking all Qantas and Jetstar employees to take paid or unpaid leave.

Three weeks ago, Qantas cut capacity across both international and domestic networks equivalent to grounding 18 aircraft until the end of May. The airline also estimated the virus would slash up to $150 million from its profit this year, nearly twice the impact of the SARS outbreak in 2003.

Then last week the airline announced further cuts, with cuts to services to Japan, Hong Kong and Auckland.

The airline's share price has been decimated in recent weeks due to the coronavirus.