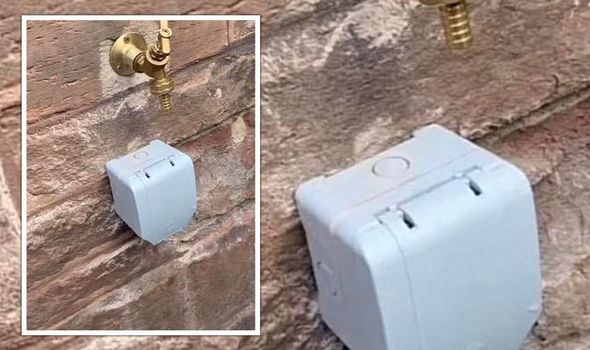 A householder from the village of Groby in Leicestershire was left with a dangerously placed plug socket after an electrician visited their property. The individual posted a photo of the dodgy job on a local Facebook page called Spotted Groby to complain about the electrician.

The homeowner asked for another electrician, preferably from Coalville, to fix the blunder, according to LeicestershireLive.

The person wrote on the Facebook group: “I’ve had a cowboy in.

“Is there anyone from Coalville that can come and sort this please?”

The photo the person uploaded shows a plug socket on a brickwork outside wall.

READ MORE: How to clean stains off a mattress

The plug itself, located on the home’s exterior walls, looks neat and tidy.

However, where the plug socket has been placed on the wall is why it’s a cause for concern.

The electrician has put the plug under an outdoor tap.

These outdoor taps are usually used for hose pipes to be attached to or for filling up watering cans.

The location of the socket underneath a tap means it’s very dangerous to use.

One user commented on the post: “I can’t believe it, shocking!

“Surely a silver tap would’ve been better? It would match the electric box better.”

A third said: “Nothing wrong with it.

“Just operate them together at the same time, just use six fingers job done.”

Other users posted GIFs from TV shows and films of people being electrocuted.

Water can be a conductor of electricity which means an individual using the socket when it’s wet could suffer from an electric shock.

Plugging something into a socket when there is water inside could cause a short circuit.

This could cause power to go out, melting wires or an overloaded electrical outlet.

Electrical fees can develop under these circumstances which can cause extensive damage to property.