“There are so many ridiculous whoppers in this interview [with Oprah Winfrey], that frankly, in the end, saying I would believe her would be like saying I believe Pinocchio,” he said, referring to the Italian puppet whose wooden nose grew when he lied.

Morgan warned Carlson that the U.S.-born Markle is one of the least trustworthy people, implicitly pushing back on his critics who have said he is wrong to doubt the televised testimony of the young royals.

He said that he hopes Harry recognizes that, as well as his contention that Markle “has a track record of ditching everyone and everything when they cease to be of use to her.”

“My advice to Harry is, make sure you remain ‘in use’,” Morgan remarked, adding that Harry’s apparent principal ‘use’ is being of royal lineage in order to provide Markle with celebrity fodder she can financially benefit from. 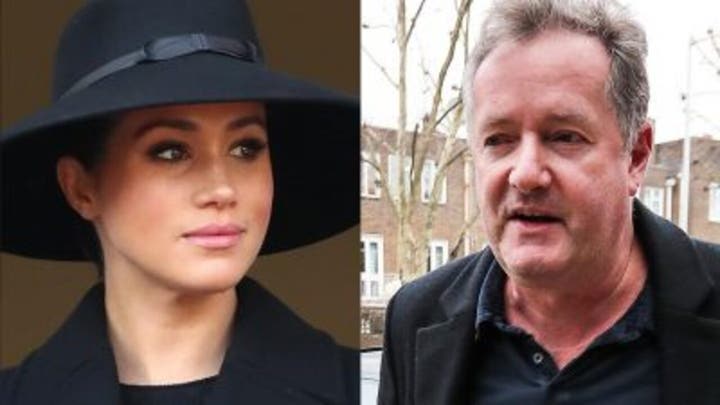 “How much money would they be making if they weren’t the Duke and Duchess of Sussex — for their anodyne view on a podcast on Spotify?” Morgan asked, adding that an average American or British worker would not have the same same luxury lifestyle they do.

He said one glaring example is how Harry joined CBS’ late-night comic James Corden on an open-top bus ride through Hollywood and Los Angeles.

Morgan said an event like that was made possible by their “royal connection” which he said the couple claims to despise.

“It’s actually shameful — what is the gameplan? Do they carry on plummeting to the bottom in terms of spewing evermore lurid details [about the Royal Family].

Morgan added that within days of their bombshell interview with Winfrey, the Sussexes appeared on “CBS This Morning.”

“The first thing they did was tell Gayle King — Oprah’s best friend who hosts the CBS Morning Show — who then broadcast this to the American people, that not only have Charles and William called — which in itself was an invasion of their privacy — but that the calls ‘have been unconstructive’,” he fumed.

“She’s basically spinning the future monarchs of Great Britain — and that’s just disrespectful for one, but to do it to your own family — this is Harry’s brother and his dad — I dont know how you could trust them again.”

“Could you trust a family member who … immediately rings the anchor of a big American breakfast show?” Morgan reiterated. “All to keep the pot boiling and making themselves talked about — which is ultimately their only currency. Otherwise they’re just another couple of celebrities on the Huckster trail.”

Fox Nation programs are viewable on-demand and from your mobile device app, but only for Fox Nation subscribers. Go to Fox Nation to start a free trial and watch the extensive library from Tomi Lahren, Pete Hegseth, Abby Hornacek, Laura Ingraham, Ainsley Earhardt, Greg Gutfeld, and many more of your favorite Fox News personalities.