Pentagon deploys fourth B-52 mission to Middle East to send message to Iran: US defense official

The Pentagon deployed more B-52H bombers to the Middle East in another demonstration of the U.S. military commitment to the region, according to a U.S. defense official.

Two bombers flew a 36-hour, nonstop mission from Minot Air Base in North Dakota to the Arabian Gulf and back.

The temporary deployment is the fourth in the last two months and the first bomber mission of 2021. 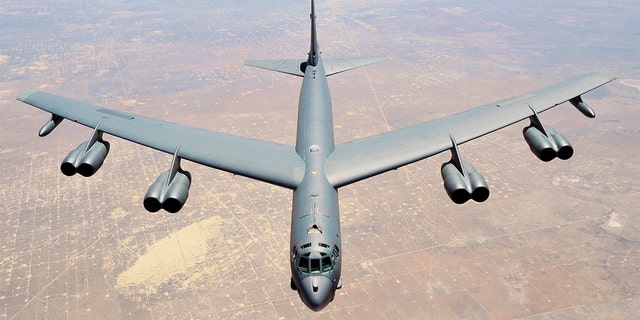 A B-52 Stratofortress assigned to the 307th Bomb Wing, Barksdale Air Force Base, La., approaches the refueling boom of a KC-135 Stratotanker from the 931st Air Refueling Group, McConnell Air Force Base
(US Air Force/Airman 1st Class Victor J. Caputo)

The bomber, also known as the Stratofortress, is a long-range heavy bomber that can fly at subsonic speeds.

During that previous flight, Iran said President Trump "will bear full responsibility for any adventurism" in the final weeks of his administration.

The U.S. has deployed the missions in response to a series of actions taken by Iran, most notably a rocket attack on the U.S. Embassy in Baghdad on Dec. 20.

About nine of the rockets landed on the embassy compound.