Nothing, the smart device startup that OnePlus co-founder and CEO Carl Pei unveiled in late January, has acquired the branding of Andy Rubin’s defunct firm Essential, 9to5Google reported on Monday.

Nothing took ownership of multiple Essential trademarks on January 6, records from the UK Intellectual Property Office show, although it’s unclear how the firm plans to use them. The London-based consumer tech startup announced on January 27 that it plans to release wireless earbuds in the first half of this year, with scant other details. It has raised roughly $22 million in funding.

Essential, meanwhile, shut down almost exactly a year ago following its tepid smartphone sales as well as sexual misconduct accusations against Rubin from his time as a Google executive, which The New York Times revealed in an explosive 2018 report.

Allegations that the Android founder received a massive exit package when he left Google despite a credible sexual misconduct complaint against him sparked a worldwide Google employee protest in late 2018, and, eventually, a shareholder lawsuit over how the company’s board handled harassment claims. Rubin has previously denied claims against him. 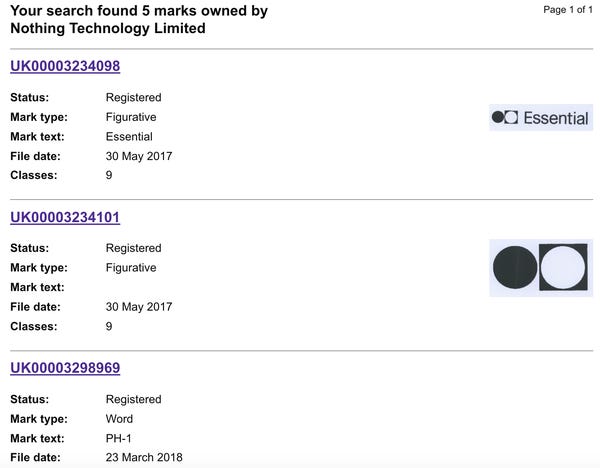 Filings show that Nothing now owns Essential’s name and logo, including the PH-1 brand, which was what Rubin’s startup called its first smartphone.

Pei raised eyebrows in October 2020 when he departed OnePlus, the Chinese electronics manufacturing company he co-founded in 2013, which was best known for its line of Android smartphones.

“Nothing’s mission is to remove barriers between people and technology to create a seamless digital future,” Pei said in a press release in late January. “We believe that the best technology is beautiful, yet natural and intuitive to use. When sufficiently advanced, it should fade into the background and feel like nothing.”

The firm on Monday also teased some upcoming news on Twitter, sharing a picture of a sweatshirt bearing the word “investor”: