As head of the city’s Civilian Complaint Review Board in 2016 and ’17, Maya Wiley oversaw the removal of a police reform recommendation from a report on officers’ use of Tasers, ProPublica reported Friday.

In a draft of the report, which the outlet published Friday morning, a key recommendation read, “The NYPD should prohibit the Tasing of handcuffed persons.”

The agency found that officers used Tasers on handcuffed people in about a third of the 150 cases it looked at and that almost all Taser deployments involved unarmed subjects – most of whom were Black. 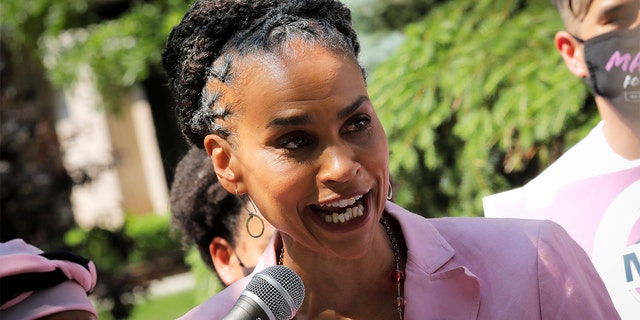 The final published version lacked direct recommendations for the NYPD and reads, “Track whether officers are Tasing handcuffed person. There are circumstances where force is appropriate against a handcuffed person, such as when that person is trying to flee or kicking violently. The CCRB will track how this exception is applied. The CCRB believes that it should only apply where there is a risk to the physical well-being of officers or others and minimal risk to the arrestee.”

And the CCRB didn’t even announce it with a press release. Wiley later downplayed the report’s importance and defended the edits at a board meeting.

“I will stand by that decision because I think it was right, fair and the credible thing to do as an agency that has to actually hold the public integrity,” she said, according to a Feb. 8, 2017 transcript of a CCRB meeting. “I don’t think the draft was final. I don’t think it was intended to be final.”

Chris Dunn, the legal director for the New York affiliate of the American Civil Liberties Union, pressed Wiley on transparency during the meeting.

“This may be the product of good intentions having gone awry, but when there’s all this attention to [the report] and then you guys release it in a way and never talk about it, it just raises obvious questions,” he said at the time.

Critics also complained that Wiley and the CCRB were too beholden to de Blasio and City Hall and argued that the board was not serving its purpose as an independent entity, according to the ProPublica report. She was also accused of improperly sharing media inquiries and public records requests with the mayor’s office.

She also allegedly went around normal hiring practices to make sure a friend was placed in a new, high-ranking position at the CCRB.

Wiley had worked as de Blasio’s top counsel before assuming leadership of the CCRB, a role she held for just over a year.

Neither she nor her campaign responded to Fox News requests for comment.

Wiley, who has been endorsed by a number of high-profile progressives including Squad leader and fellow New Yorker, Rep. Alexandria Ocasio-Cortez, has called for slashing another $1 billion from the NYPD budget – even with violent crimes on the rise in neighborhoods across the five boroughs.

Wiley, an attorney and activist, has espoused “alternatives to policing” and, as she puts it on her campaign website, bringing the NYPD budget “in line with our values and priorities.”

She also wants to put a “freeze” on the incoming cadet classes of the NYPD and New York Department of Corrections and “remove NYPD from mental health crisis management, traffic enforcement, and school safety.”