Major media outlets are often accused of downplaying atrocities of socialist regimes, and nowhere is that clearer than with the treatment of former USSR (Union of Soviet Socialist Republics) by The New York Times and others, say those with personal experience in the former federation.

Fox News took a look at some of the most over-the-top examples:

1) “There is No Famine” in the Soviet Union

In 1931, New York Times Moscow correspondent Walter Duranty reported that “there is no famine… nor is there likely to be” in Soviet-occupied Ukraine. In 1932, he was awarded the coveted Pulitzer Prize for his reporting on the Soviet Union.

But, on the ground, reporters discovered a tragically different picture.

“Millions are dying of hunger,” freelance journalist Gareth Jones reported in 1933 after making a trip to Ukrainian villages, where a government-created food shortage was unfolding.

“Everywhere was the cry, ‘There is no bread. We are dying,’” Jones reported in several major outlets.

Within days, Duranty wrote a news story in the Times slamming Jones’ reporting as “a big scare story.” Duranty’s rebuttal was titled: “Russians Hungry, But No Famine.”

Duranty listed his sources: “I have made exhaustive inquiries about this alleged famine situation. I have inquired in Soviet commissariats and in foreign embassies with their network of consuls, and I have tabulated information from Britons,” he wrote.

In August 1933, Duranty continued to dismiss signs of famine, declaring in the Times that “any report of a famine in Russia is today an exaggeration or malignant propaganda.”

“Duranty was quite evil,” Tom Palmer, a liberty activist who helped smuggle books into the Soviet Union at the tail end of the regime, told Fox News.

Jones’s reporting ultimately proved true, and it is now accepted that at least 3.9 million died in the famine.

“I personally spoke with some of the people who were there,” Anatoly Glazer, who was born in the Soviet Union in the 1950s and lived there before getting out in 1987, told Fox News. “My Ukrainian friend Stepan told me: ‘My small brother tried gnawing at raw potatoes, but died anyway.’”

So, why did Duranty and other Western journalists downplay what happened?

One Moscow reporter for United Press newswire, Eugene Lyons, wrote about why.

“Throwing down [reporter Gareth] Jones was as unpleasant a chore as fell to any of us in years of juggling facts to please dictatorial regimes — but throw him down we did,” Lyons admitted in a 1937 book.

The Times has since repudiated Duranty’s softball reporting on the Soviet Union. However, the Pulitzer Prize Committee chose not to revoke Duranty’s prize.

Jones never got to see any of that, as he was murdered under suspicious circumstances in 1935 while reporting in Mongolia. His exploits in exposing the Soviet genocide have been memorialized in the 2019 film, “Mr. Jones”.

In the modern era, The New York Times still has run articles on the Soviet Union that critics have slammed as puff pieces. The paper did not respond to Fox News’ request for comment.

A 2017 op-ed titled “Lenin’s Eco-Warriors” credited Soviet leader Vladimir Lenin for establishing nature reserves in the USSR. The nature reserves spanned the size of “40 states of Rhode Island,” or, about half of one percent of the Soviet Union’s total territory.

“There’s a technical term for this kind of reporting: a joke,” Palmer said. “The Soviets totally destroyed one of the largest seas in the world, the Aral Sea,” by diverting water for cotton production across decades, he added.

Side-by-side of Russia’s Aral Sea, once the fourth largest sea in the world, devastated by Soviet water diversion. The left image is from 1989, the right from 2014.
(NASA, File)

Researchers also have linked the Soviet Union to many other environmental atrocities, including the illegal mass hunting of some 180,000 whales, which reduced world whale populations so much that the impact is still felt today.

3) “How the Soviets Won the Space Race for Equality”

The New York Times also covered how the Soviet Union beat the U.S. in the diversity of early space missions.

The Times tweeted in 2019: “America may have put the first man on the moon, but the Soviet Union sent the first woman, the first Asian man, and the first black man into orbit—all years before the U.S. would follow suit.”

Glazer, who as a Jewish man was a minority in the Soviet Union, said the Soviets had a diverse space force only for international propaganda points.

4) “Black Is Always in Fashion”

A November 2017 article in the Times made light of the dress code of Antifa, a loose association that has endorsed and committed violence against those they deemed “fascists.” Antifa chapter members also frequently have advocated for socialism. 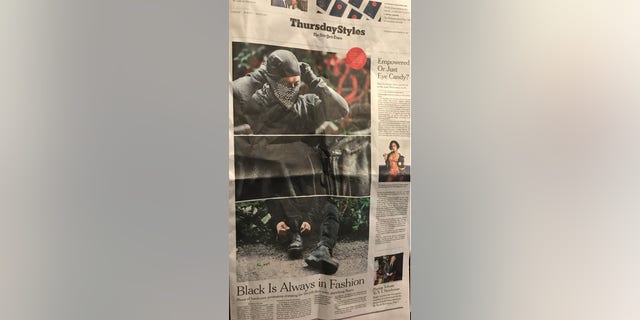 The Times put a positive tone on Antifa’s choice of attire, even as it noted that the reason for its distinctive garb was to allow members to get away with crimes.

In the last year, the Times also downplayed Antifa’s involvement in widespread violence across the country. When Sen. Tom Cotton, R-Ark., wrote an opinion column for the Times noting Antifa involvement, the staff later added a note declaring, “Those allegations have not been substantiated and have been widely questioned.”

But, Attorney General William Barr has stated: “I’ve talked to every police chief in every city where there has been major violence and they all have identified Antifa as the ramrod for the violence."

“Antifa — they’re just the competitors of Nazis. They’re not the opposite of them any more than the Bloods and Crips are opposites. Philosophically, they’re just rival gangs,” he said.

Asked what major media outlets should be covering instead of all the above, Glazer said they should talk more with people who actually lived through socialism.

“Americans should open their eyes and talk to previous citizens of Russia, Cuba, Venezuela, Poland and other Eastern European countries,” Glazer said. “The beginning of socialism is nice and sweet speeches, ideas, promises. But, right after a victory, they convert to [a] dictatorship regime. People lose any rights and very few on top live like kings.”

He continued, “The only way to freedom, progress, wealth is a free society, free labor, creativity, and religious freedom. Do not make a mistake.”