Woolworths chief executive Brad Banducci says the supermarket giant is effectively serving "50 million Australians, not 24 million" as panic buying of products rips goods from its shelves. And Mr Banducci, who announced new limits on the amount of goods each customer can buy, implored Australians to purchase only what they need so supermarkets can restock products.

After holding talks with the government, Mr Banducci and the heads of other supermarket chains will stop short of implementing wartime-style rationing methods amid growing fear about the coronavirus. But they are warning they face a difficult balancing act of returning stock levels to normal without instilling further panic-buying through demand-limiting strategies. 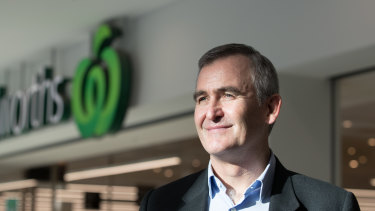 "It's virtually impossible for any of us to keep up with it," he said, referring to other supermarket operators such as Coles and IGA. "It's physically not possible."

"If all of our customers collectively across all retailers in Australia just bought what they needed, plus a little bit more, we would have everything in stock that they need."

Speculation had been mounting that supermarkets could be forced to implement extreme measures, such as restricting purchasing for certain people to certain times or days of the week, but Mr Banducci said that was not something the company was looking to implement currently.

Supermarkets have stressed the current product shortages are not due to a shortfall in supply, rather a huge increase in demand, which has led to difficulties in getting fresh stock into stores.

"We do not have a supply issue. Eighty-five per cent of the food products we sell are either grown or manufactured in Australia," Mr Banducci said.

On Wednesday, Woolworths unveiled its strictest set of buying limits yet, putting a two per customer, per transaction limit on nearly every packaged item in-store as the grocer desperately tries to curb the unprecedented demand.

Mr Banducci said if shoppers and retailers were unable to moderate further panic buying, the company would not hesitate to implement further limits, though noted he had seen the surge in demand starting to "taper off" since last weekend.

These sentiments were echoed by Scott Marshall, IGA supplier Metcash's chief executive of supermarkets, who told The Age and The Sydney Morning Herald extreme rationing measures would only serve to create more panic. 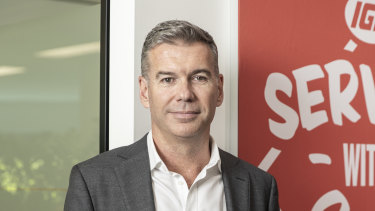 "More restrictions on who can shop on what day could potentially create more panic, and would be very hard to manage," he said.

"It's about how to serve the local community while trying to remain calm. It's a balancing act."

Coles, Woolworths and some IGA stores have begun to introduce early morning shopping exclusively for elderly and disadvantaged shoppers, which Mr Banducci admitted got off to a rocky start on Tuesday as many shoppers were unable to find the goods they wanted.

"We learned a lot in the course of yesterday and then we did adjust today, and I would hope tomorrow and Friday will be better yet again," he said.

Woolworths, Coles, Aldi and Metcash executives have had a number of joint calls with government to provide updates on supply chains, which Mr Marshall said were holding up "very well" given the massive increase in demand.

"We're having in excess of Christmas volumes every day without planning, so the supply chain is working very well considering," he said.

He called for "consistent strong messaging" from both retailers and government to ensure that Australians were aware retailers have "worst-case scenario" plans in place, and that stores would "trade through any scenario".

On Wednesday Scott Morrison slammed Australians who were hoarding food due to the virus, saying it was "not sensible" and that it was 'un-Australian'.

"It is not helpful and it has been one of the most disappointing things I have seen in Australian behaviour in response to this crisis," he said.

The government on Wednesday warned preventative measures put in place to stop the spread of the virus could persist for up to six months. However, Mr Banducci said it was "hard to see" the panic buying continuing for that long.

"But the sooner it can start cooling off, the better."

Separately, Coles confirmed that it had received 36,000 applications for casual positions since Monday as the company seeks to hire an additional 5,000 workers to keep up with demand.