Home » World News » ‘None of us want that’: Woodside warns on government intervention if negotiations drag

‘None of us want that’: Woodside warns on government intervention if negotiations drag

A Woodside executive has warned governments could intervene in its $48 billion Burrup gas processing hub vision if it couldn't lock down negotiations with joint venture partners.

Woodside executive vice president of development Meg O'Neill delivered the subtle barb at the company's Pilbara partners in a keynote speech at the Australasian Oil and Gas conference in Perth on Wednesday morning. 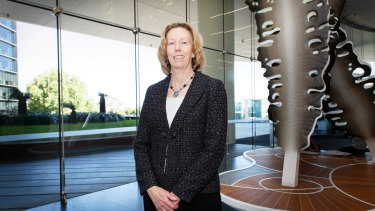 Woodside’s executive vice president of development in the lobby of Woodside HQ in Perth.Credit:Trevor Collens

The Burrup Hub vision includes a new LNG processing train at Woodside's Pluto facility and connecting that to the Karratha Gas Plant as well as developing the Scarborough and Browse gas fields to extend the life of North West Shelf infrastructure.

A Scarborough decision is expected mid-year but the bigger Browse development has been significantly delayed because non-Browse partner Chevron has not given the thumbs-up to process Browse gas through North West Shelf.

In front of Chevron Australia managing director, Al Williams, Ms O’Neill warned jobs were at risk if the two fields did not go ahead and government intervention was a possibility.

"The developments also rely on collaboration with industry partners, in the event that industry can't agree on opening up facilities to third parties it would be understandable if governments were to intervene and none of us wants that," she said.

"If these proposed projects did not progress it would be lost opportunity for WA in terms of jobs energy supply and opportunities for small to medium size businesses.

“Even in the most stable of times, the reality for our industry is no company can deliver big projects alone.

The WA government has previously waded into the Browse saga with Premier Mark McGowan urging Chevron and Woodise to strike a deal as a priority in October last year.

One thing oil and gas companies did agree on at the conference was to unveil 'forward work' procurement plans to highlight upcoming work opportunities for small to medium enterprises.

WA Premier Mark McGowan said to get Chevron, Woodside, Shell and Santos to publish the plans was equivalent to 'unveiling their hands all at once'.

"The plans will have a major impact in helping Western Australian businesses manage and maximise contracting opportunities and supply chains in the industry," he said.

“They are aimed at encouraging and supporting suppliers to ‘gear up’ and secure potential contracts by allowing them to develop new skills in their workforces and new infrastructure."