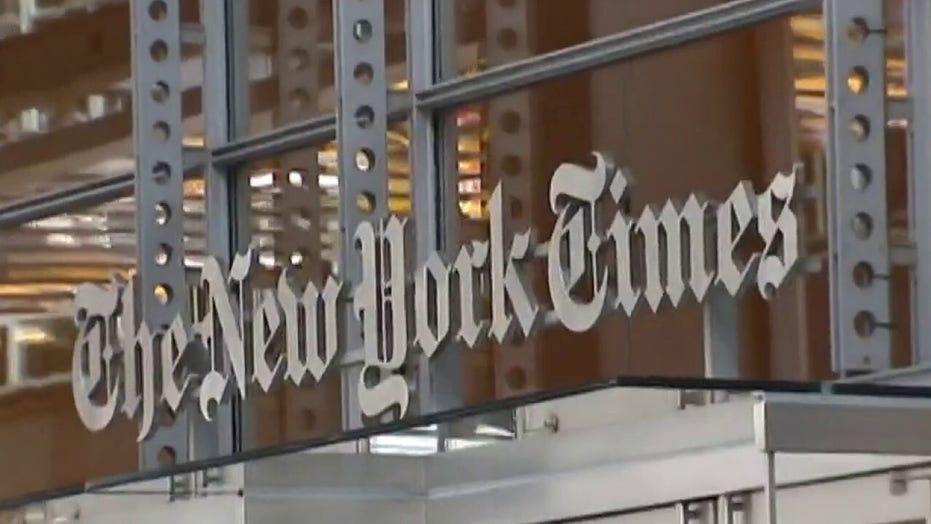 NY Times ‘spineless’ when it comes to editors straying from liberal orthodoxy: Kurtz

MediaBuzz host Howard Kurtz weighs in on a New York Times job posting which aims for an editor with a ‘spine of steel.’

Taylor Lorenz, one of the most prominent journalists at The New York Times, raised eyebrows on Monday while commemorating International Women’s Day.

Lorenz, the tech and internet culture reporter who has built a reputation as a “tattletale journalist” among critics, suggested on Twitter that she had been a victim of “online harassment”.

“For international women’s day please consider supporting women enduring online harassment,” Lorenz began a lengthy Twitter thread. “It’s not an exaggeration to say that the harassment and smear campaign I’ve had to endure over the past year has destroyed my life. No one should have to go through this.”

The high-profile Times reporter continued, “I’m slightly open [about] some of what I deal w/ but the scope of attacks has been unimaginable. There’s no escape. It has taken everything from me. The only mild solace I’ve found is w/ other women who have had their lives destroyed in the same way. We’ve developed deep trauma bonds.”

Lorenz went on to promote a viral initiative called the “Coalition Against Online Violence,” which claims on its website that “Women journalists face online violence simply for doing their job. These online attacks have very real consequences, both for the journalists themselves and for freedom of expression.”

“I’m grateful to everyone building tools in this space and the tech leaders who make safety for *all* users a priority. To tackle this problem we need technological change, cultural change, and a system of support for those going through it,” Lorenz wrote.

Critics panned the Times reporter for espousing her alleged “victimhood.”

“Taylor Lorenz is a star reporter with the most influential newspaper in the US, arguably the west. Her work regularly appears on its front page,” independent journalist Glenn Greenwald reacted. “Her attempt to claim this level of victimhood is revolting: she should try to find out what real persecution of journalists entails.”

Greenwald continued, “If you’re going to insinuate yourself into polarizing political debates and report (or pretend to ‘report’) on the powerful, you’ll be ‘attacked’ online. It can be extra toxic due to race, gender, sexual orientation, etc but it’s still just online insults. That’s not persecution. With all the suffering and deprivation and real persecution in the world, it is utterly astonishing how often coddled, well-paid, highly privileged, coiffed, insulated, protected US [sic] elites posture as the world’s most oppressed class. It’s quite sickening and offensive.”

Journalist Michael Tracey wrote, “If you are this traumatized and disconsolate from your adult professional choices, that’s unfortunate and hopefully you have mental health resources available. But using it as a battering-ram to stigmatize as ‘violence’ all criticism of you, a public figure, is totally absurd.”

“I’m no good at being noble, but it doesn’t take much to see that the problems of 7 billion little people don’t amount to a hill of beans compared to the troubles of the NYT’s social media tattletale wealthy white [sic] girl from a $90k Swiss boarding school,” said commentator David Burge, riffing off a line from the film “Casablanca”.

Lorenz fired back at Greenwald, accusing him of using “dog whistle commentary” that contributes to the harassment she faces.

“‘She should try to find out what real persecution of journalists entails’ is exactly the type of threatening dog whistle commentary that contributes to harassment campaigns. It’s not ok,” Lorenz wrote.

She added, “Female journalists, stars or not, should not have to endure harassment for doing their job.”

Last month, Lorenz was under fire for erroneously claiming that entrepeneur Marc Andreessen had used incendiary language during a chatroom discussion on the social media app Clubhouse.

“@pmarca just used openly using the r-slur on Clubhouse tonight and not one other person in the room called him on it or saying anything,” Lorenz tweeted in early February.

After several critics refuted her accusation, Lorenz issued a formal mea culpa but stopped short of offering an apology to Andreesen.