Jennifer Mess, a New Jersey public school teacher, said Sunday on ‘Fox & Friends Weekend’ that her stomach was “churning” after watching a teachers union training video enticing her and her colleagues to log the vaccination status of students and parents into a progressive app.

The video, produced by the vaccine equity nonprofit Made to Save as well as the American Federation of Teachers (AFT) and the National Educators Association (NEA), reportedly instructs teachers to upload their conversations with students and parents into the campaign app Reach, in exchange for rewards like gift cards.

Mess, a drama teacher for the Middletown Township Public Schools, argued that the training talked them through scenes where they would be “manipulating parents and students and as educators,” saying the instructions were “completely against what we do.”

“So the crazy thing is districts didn’t know this was happening,” she added. “It was behind everyone’s back.”

Mess said that the training also omitted that the app was initially developed for progressive firebrand Rep. Alexandria Ocasio-Cortez, D-N.Y. 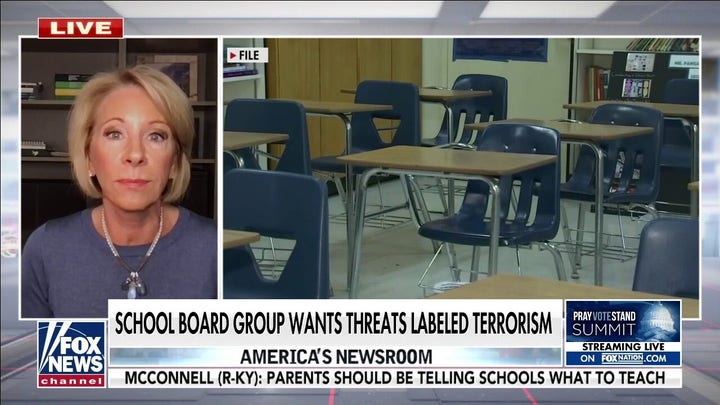 As a means of justifying the assignment, the union argued it was intended to encourage pupils and parents to get their shots.

“As someone the person already knows and trusts, you can find out what is concerning them about the vaccine, relate on a personal level, and share information to help them on their journey to get vaccinated,” one slide read.

But Mess questioned that motive.

“While you’re watching this training your stomach is turning because you want to use my rapport with parents to coerce them to do what the government is telling us to do,” Mess said. “It feels like they want us to become indoctrination camps instead of education curriculum.”

“We want to provide that love and care for our parents, and instead they want us to push an agenda,” she continued. “And that’s what it felt like.”

Parents have begun to confront their local school boards over progressive curriculums that have been catching fire in classrooms, such as critical race theory. Viewing many of these parents as threats, the National School Board Association requested that the Department of Justice launch an investigation into potential acts of violence against school officials and teachers. When the department complied, outraged parents felt the need to inform the federal government they were not domestic terrorists.