Miami Heat forward Jimmy Butler has signed a multiyear deal with the performance-lifestyle brand Rhone, the company announced on Wednesday.

The NBA star will collaborate on product design and marketing as a business partner, according to the agreement. Butler will also become an investor in the menswear brand, which sells active apparel and loungewear. It’s not clear how much stake the athlete will have in the retailer.

Rhone’s products are carried at US stores and gyms like Nordstrom, Equinox, and Peloton’s brick-and-mortar locations. Eighty percent of Rhone’s business comes from direct-to-consumer sales online and its four brand-owned stores in New York and Connecticut, WWD reported.

Partnering with Rhone was a no-brainer for Butler, who said he appreciated the brand’s goal of creating clothing that blurs the line between lifestyle and performance. He added that certain parallels between himself and the fast-growing digitally native brand were an important factor in his signing on.

“The brand is a lot like me in a lot of ways, coming out of nowhere — small-town kid like me being able to work your way up to the big leagues and be one of the best to do it at that,” Butler told Insider in an interview. “And that’s where I see Rhone.”

Founded in 2014, Rhone brings in $50 million in annual sales, WWD reported. The company has also made inroads in the fitness industry via a partnership with Tonal, an at-home digital-fitness company that lets shoppers test products in Rhone stores while working out on Tonal machines.

Rhone has raised $37 million in funding to date, according to Crunchbase.

How Butler chooses brands to partner with 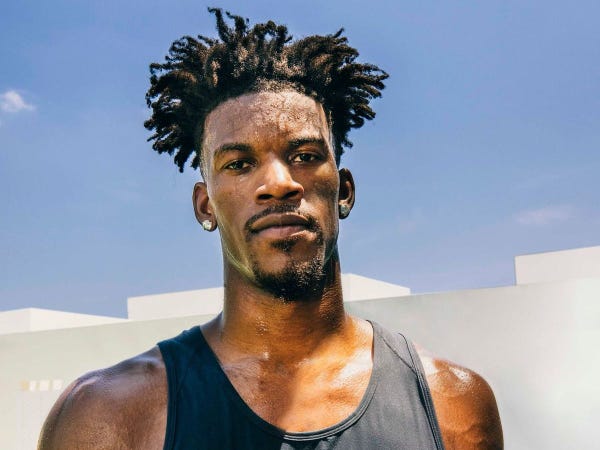 Rhone’s motto of “Forever Forward” was also a major factor in Butler’s decision to partner with the brand, he said. He’s set to launch an undisclosed vertical at Rhone and define the brand’s voice on social media. Butler will also lead community-outreach programming with Rhone, such as a basketball clinic for underprivileged kids.

“They’re always trying to move forward and be better and be the best,” Butler said. “That’s how I live my life every single day.”

Butler’s path to the NBA was an atypical one. He was kicked out of his mother’s house at age 13 and spent years couch surfing in Tomball, Texas, until a family took him in while he was in high school. He did not receive any Division I college offers and completed a year of junior college before landing at Marquette University, after which he was drafted by the Chicago Bulls as the 30th overall pick in the 2011 draft.

“People need help, whether they want to admit it or not,” he said. “I understand life can be hard at times. And I love bringing smiles to people’s faces, especially children that want to be like myself or want to be like anybody else.”

Butler is a five-time NBA All-Star and a 2016 Olympic gold medalist. But he is always focused on the future — so much so that in 2015, he said he removed the rearview mirror in his car as a symbolic gesture to avoid looking back.

But when it comes to brand partnerships and deals, Butler acknowledges his journey and says it’s something that informs which brand partnerships to pursue. Butler prematurely ended a partnership with Jordan Brand in January 2020 and agreed to sign a multiyear footwear deal with the upstart Chinese sneaker company Li-Ning in December.

“This is just another way to plant a seed,” he said. “I’m here to make sure that you can be the best version of yourself. And now Rhone gets to help me with that.”