The National Park Service has begun closing facilities and services at parks and monuments across the country after what many say was a slow, dangerous response to the deadly coronavirus pandemic.

The Washington Monument and other sites on the National Mall in Washington, D.C., closed over the weekend, followed on Monday by the Statue of Liberty in New York City and Alcatraz Island and other sites at the Golden Gate National Recreation Area in San Francisco. Several smaller sites, including Arizona’s Casa Grande Ruins National Monument and Georgia’s Fort Pulaski National Monument, announced full closures Tuesday.

At numerous parks and other sites that remain open, visitor centers have shuttered, and shuttles, guided tours and other often-crowded public events have been suspended in an effort to prevent the spread of COVID-19 among visitors, federal employees and other park staff. A steady stream of closures and operational changes were announced on NPS’s website on Tuesday.

In St. Louis, Missouri, tram rides to the top of The Gateway Arch were suspended starting Tuesday, though the visitor center, museum, cafe and other parts of the park remain open.

More aggressive mitigation efforts kicked into gear after the Trump administration Department of Interior granted park superintendents the authority to manage their own response and suspend operations as they see fit. In a Tuesday news release about modifying its operations, NPS said it is “taking extraordinary steps” to implement the latest guidance from health experts and promote social distancing.

“The health and safety of our visitors, employees, volunteers, and partners is the priority of the National Park Service,” Interior Secretary David Bernhardt said in a statement accompanying the release. “Park superintendents are empowered to modify their operations, including closing facilities and cancelling programs, to address the spread of the coronavirus.”

But park officials had previously been told that “all operational changes in parks (cancellations and closures) must be made through the proper NPS leadership channels” in Washington, D.C., according to National Parks Traveler, a nonprofit media organization that covers park news.

The change of course by the Trump administration comes one day after the Coalition to Protect America’s National Parks, an organization representing current and former parks employees, called on NPS to shut down all facilities that require people to be in close proximity to one another.

“We fully recognize that calling for a nationwide closure of national park sites is unusual,” the coalition said. “But these are unprecedented times that call for unprecedented measures.” 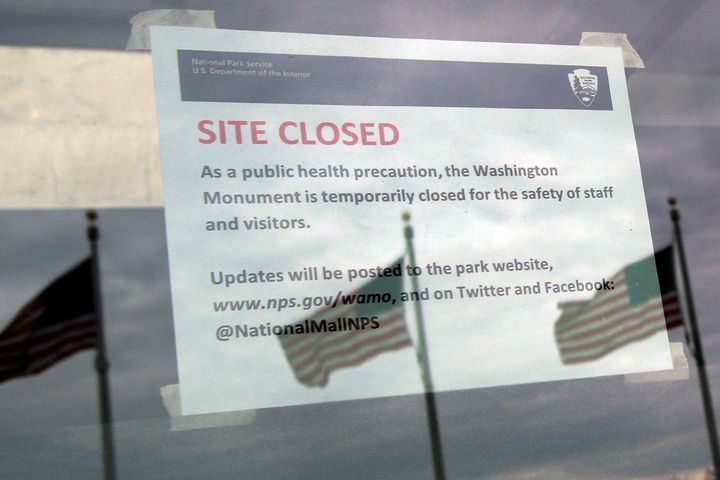 The Centers for Disease Control and Prevention on Sunday recommended gatherings of 50 people or more be postponed or canceled for the next eight weeks. And President Donald Trump on Monday called on Americans to avoid public places and crowds of more than 10 people ― which is certainly out of step with allowing park facilities to remain open, as the NPS saw 327 million visitors last year.

As the coronavirus upended daily life and forced the closure of restaurants, bars and other public spaces in cities across the country, many wondered for how long America’s national parks, monuments and memorials would continue to be part of the problem.

Jon Jarvis, the former director of the National Park Service under President Barack Obama, told HuffPost he was shocked by the lack of leadership and guidance NPS received from Washington early on and said restoring park superintendent authority was the right move to protect employees, concessioners and visitors.

“Since the arrival of this administration, they have been preaching that they wanted to get the decision makers ‘closer to the field’ and out of the hands of the Washington bureaucrats,” Jarvis said by email Tuesday. “This is how they justified the ‘re-organization’ and moving employees to the west. And yet, when the crisis of the virus hit, they pulled the decisions out of the hands of the people in the field. Then realized, late, that this was a bad decision and restored their authority.”

Even as the number of confirmed COVID-19 infections and deaths in the U.S. spiked and health officials sounded the alarm that the worst is yet to come, the National Park Service maintained a surprisingly optimistic message.

“Visitors can be assured that facilities and service in national parks, including lodges, restaurants and shuttles, continue to monitor conditions and maintain high standards related to health and wellness of staff and visitors,” reads NPS’s website on its COVID-19 response.

Bernhardt followed Trump’s lead in downplaying the severity of the coronavirus threat.

“As the CDC has stated, this virus is NOT currently spreading widely in the United States, and most people in the United States will have little immediate risk of exposure to this virus,” Bernhardt wrote in guidance to agency staff on March 9. At that point, infections had started to balloon in the U.S., with at least 22 fatalities and over 400 confirmed cases in at least 35 states.

“Americans don’t need to change their day-to-day lives but should stay informed and practice good hygiene,” Bernhardt’s office wrote in a March 11 memo obtained by the Los Angeles Times that included talking points for Interior officials.

As of Tuesday, the outbreak has reached 49 states, the District of Columbia, Puerto Rico, Guam, and US Virgin Islands. There have been more than 4,000 confirmed cases and 75 deaths in the U.S. and the CDC’s worst-case projection indicates that 160 million to 214 million Americans ― 49 to 65% of the U.S. population ― could ultimately be infected, as The New York Times reported last week.

By seemingly every measure, Trump has bungled the government’s response. He spent weeks falsely claiming that the outbreak was under control and blaming other countries for letting the disease spread, wasting precious time to get out ahead of the outbreak. Still, Bernhardt has showered his boss with praise, tweeting March 13 that the president took “decisive — even unprecedented — actions to protect the American people.”

What impact the administration’s sluggish response at national parks will have remains to be seen.

“It’s a relief to see things headed in the right direction,” Kate Kelly, public lands director at the left-leaning Center for American Progress and a former interior official in the Obama administration, said Tuesday after additional park facilities were closed. “Still, it’s shameful that it took this long for management to empower land managers to do what’s right for public servants and visitors alike.”

The Interior Department did not immediately respond to HuffPost’s request for comment Tuesday.

Keep up with the latest updates on the coronavirus at our live blog.