Trump, Biden campaign in Florida as election may come down to the Sunshine State

‘Outnumbered’ panel weighs in days ahead of the final vote.

More than 7.6 million young people ages 18 to 29 have already voted in the 2020 election as of Thursday, according to Democratic firm TargetSmart.

Texas, Florida and North Carolina are leading with most youth votes cast as of Oct. 23, according to the Center for Information & Research on Civic Learning and Engagement (CIRCLE).

Young voters cast 433,700 ballots in Florida and 331,900 ballots in North Carolina — two key battleground states in the presidential race — as of Oct. 23, according to CIRCLE. Those numbers greatly exceed 2016 numbers. Brooke Hader, 18, votes for the first time since becoming old enough to be eligible, as she fills out her ballot during absentee early voting for the general election in Sterling Heights, Mich., Thursday, Oct. 29, 2020. (AP Photo/David Goldman)

Democrats are hoping get-out-the-vote efforts among young people will result in a blue wave and a Biden presidency, which could hinge on North Carolina.

"It’s these voters who typically are considered low turnout — maybe they’ll vote, maybe they won’t — and yet they are going to the polls early in huge numbers," Weber said. "That could make up the margin of victory for Democrats up and down the ballot."

"We could feel in the air that young people were fired up going to go to the polls in huge numbers," said Weber.

But record youth turnout could be diluted by higher turnout among all age groups, Andy Jackson of the conservative Civitas Institute told Fox News. 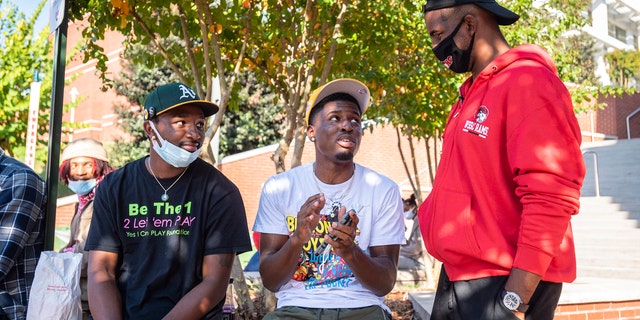 "The voting demographics are still skewing older, just not by as much," Jackson said. "If it’s a really close race, then it could help Democrats, but this is not enough to change the entire contour of the election."

Weber and Jackson agreed that winning North Carolina is key to President Trump's reelection. Weber's group plans to make around 200,000 calls and send around 500,000 texts in the days leading up to the election.

"This is really a must-win state for Trump. Biden can lose this state and still be OK," Jackson said. "The Trump campaign has been putting more effort here because they have to."

Trump will hold a rally in Fayetteville, N.C., after stumping in Tampa, Fla., on Thursday. The Civitas Institute's latest poll shows Biden polling at 47% and Trump at 46% in North Carolina.