Several members of the mainstream media hailed Tuesday’s confirmation of Transportation Secretary Pete Buttigieg by falsely declaring him the “first” openly gay person to ever lead a government agency.

Buttigieg, the former South Bend, Ind. mayor and 2020 Democratic presidential candidate, was confirmed by the Senate by an overwhelming 87-13 vote.

“With a vote of 86-13, the Senate has confirmed @PeteButtigieg as the Secretary of Transportation. He’s making history as the first openly LGBTQ cabinet secretary,” CBS White House correspondent Weijia Jiang said.

“86-13, the Senate confirms @Pete Buttigieg to be US Secretary of Transportation. He becomes the first millennial and first openly gay cabinet secretary in history,” NBC News reporter Sahil Kapur said.

While some journalists like Viser and Kapur amended their inaccurate tweets, The National correspondent Joyce Karam bizarrely doubled down on her false declaration after critics corrected her tweet.

“There has been long list of LGBTQ US ambassadors but not a cabinet member confirmed by the Senate. Mayor Pete is the first. Dismissing or refuting it doesn’t make it go away!” Karam exclaimed. “Neither does trolling. Facts, truth are stubborn things. Not measured, thankfully, by clickbait accounts.” 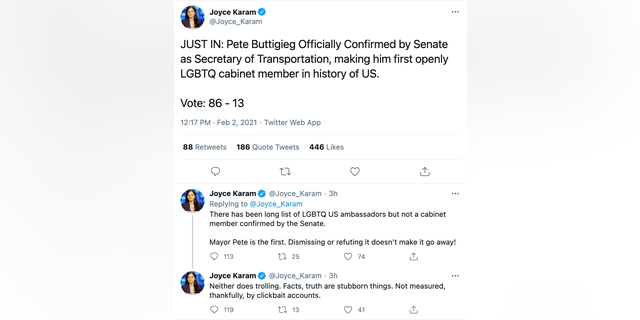 Grenell himself congratulated Buttigieg for his confirmation while offering a subtle nod to those attempting to rewrite history.

“Congratulations to @PeteButtigieg on becoming the second openly gay member of a President’s Cabinet. Welcome to the club!” Grenell posted along with pictures of him from the White House.