The mainstream media ran wild with claims pro-Trump extremists could breach the Capitol on Thursday, but the hysteria turned out to be much ado about nothing.

CNN brought on guests to call the threats “real” and “credible” and the Washington Post published a piece, “Capitol Police say intelligence shows militia group may be plotting to breach the Capitol,” that featured the bylines of four separate reporters and contributions from six additional staffers.

The Post noted it was “a date that some followers of the QAnon extremist ideology falsely claim will mark former president Donald Trump’s return to the White House” before noting Capitol Police declined to name a specific group it was concerned about. 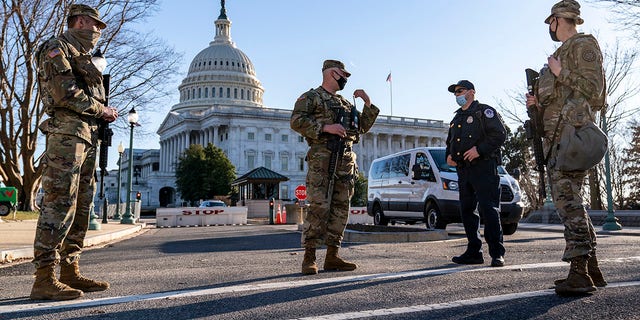 The mainstream media ran wild with claims pro-Trump extremists could breach the Capitol on Thursday, but hysteria by the press turned out to be much ado about nothing. (AP Photo/J. Scott Applewhite)
(AP)

A pro-Trump mob stormed the Capitol in a deadly melee on Jan. 6 that also disrupted the certification of President Biden’s Electoral College victory. Since then, the building has been surrounded by fencing and National Guardsmen in anticipation of other attacks.

The Post reported “talks of the QAnon ‘conspiracy theory’ surrounding March 4” were circulated online and “an ‘unidentified group’ of militia violent extremists had ‘discussed plans to take control of the U.S. Capitol and remove Democratic lawmakers’ on that date.”

The House canceled Thursday’s session as a result of the threats and Senate staffers were “encouraged to take precautions such as parking in underground garages,” the Post reported.

Other liberal news outlet gave significant coverage on the threats that never amounted to anything, too.

CNN’s digital operation published a story headlined, “Feds on high alert Thursday after warnings about potential threats to US Capitol,” that noted law enforcement was on high alert following the intelligence bulletin.

“The violent extremists also discussed plans to persuade thousands to travel to Washington, DC, to participate in the March 4 plot,” CNN reported, citing the bulletin. “Some of the conspiracy theorists believe that the former President will be inaugurated on March 4.”

CNN even aired a special on QAnon last week to inform viewers of the group with March 4 looming, while CBS interviewed the group’s infamous shaman. The Hill highlighted Rep. Al Green, D-Texas, sitting on the Capitol steps Thursday as a sign of defiance against the supposed threat.

But the nation’s capital remained peaceful on Thursday as QAnon never showed up.

The Washington Post printed a story Thursday, with five bylines and two contributors, headlined, “At the Capitol, a March 4 threat from militant Trump supporters proves a mirage.”

“We didn’t see a single person insurrecting the Capitol today, or for that matter anywhere else in the United States,” Fox News host Tucker Carlson said on his show Thursday. “Are you shocked? Don’t be shocked. It was all just another lie. It wasn’t so different from when they told us we’d need troops to protect Joe Biden’s inauguration.”

Meanwhile, Fox News learned on Thursday that U.S. Capitol Police would request that National Guard troops stay at the Capitol for an additional two months.

“A lot of liberals were certain that … March 4 was the day the right-wing revolution would finally begin. March 4, they believe, was something called ‘QAnon Inauguration Day,’” Carlson said.

“What’s QAnon Inauguration Day? We have no idea. We don’t know anyone who does know. In fact, we bet money that not one Trump voter in a million had ever heard of it until this week when the hysteria merchants on the other channels started yapping about it on television. They heard about it from Nancy Pelosi, who told her bodguards to write up a report on the threat of QAnon Inauguration Day, so that’s what they did.”