WASHINGTON — As the federal government grapples with the coronavirus pandemic, an early hot spot for the disease — President Donald Trump’s for-profit Florida country club ― is getting a “deep cleaning.”

Mar-a-Lago, which hosted a fundraising weekend for Trump and the Republican National Committee that brought together nearly 1,000 donors earlier this month, was shut down Monday, according to an email obtained by HuffPost. At least four of the event’s attendees later tested positive for COVID-19, the disease caused by the coronavirus.

“Mar a Lago will undergo a thorough deep cleaning of the main house, guest rooms, and dining areas on Monday, March 16th. Please take note that no one will be permitted to enter the main house all day,” the email reads. “The beach club will remain open. Deep cleaning of all other areas will follow in the days to come and we will keep you updated.” 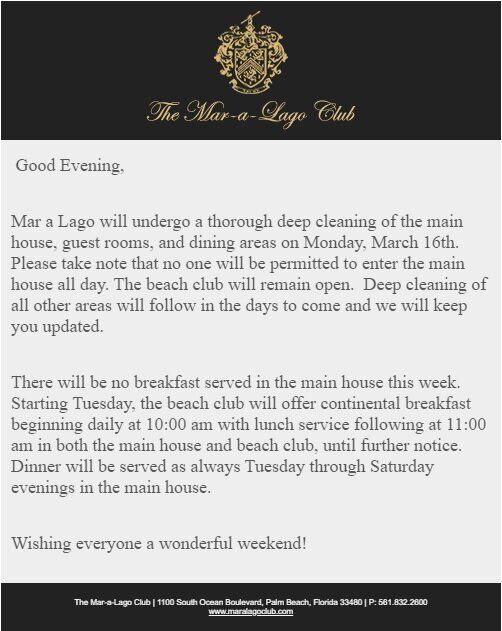 The Mar-a-Lago “deep cleaning” email, which details which amenities will be available in the coming days, was sent to the club’s hundreds of members Saturday evening.

“There will be no breakfast served in the main house this week,” it reads. “Starting Tuesday, the beach club will offer continental breakfast beginning daily at 10:00 am with lunch service following at 11:00 am in both the main house and beach club, until further notice. Dinner will be served as always Tuesday through Saturday evenings in the main house.”

The note closes with: “Wishing everyone a wonderful weekend!”

A person who answered the number listed in the email confirmed that a “deep cleaning” was underway Monday, but would not say whether it was related to coronavirus. “I’m not authorized to answer that,” said the man, who identified himself on the phone as “Trump security.”

Monday’s cleaning was first reported by CNN. The Trump Organization, the president’s family business that owns Mar-a-Lago, did not respond to HuffPost’s requests for comments. 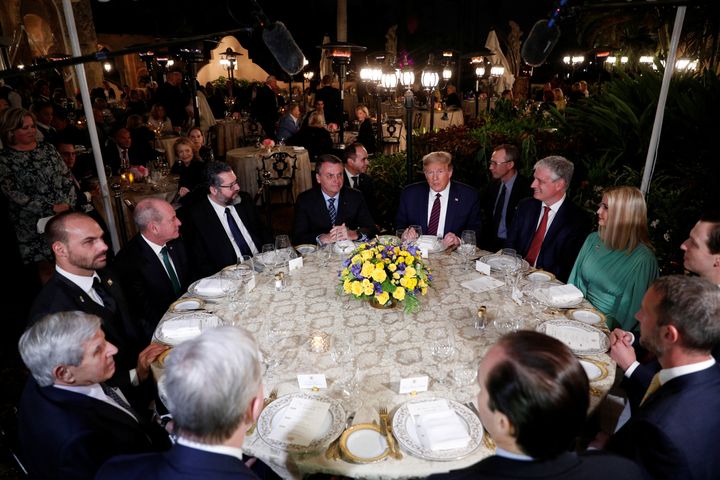 RNC Chairwoman Ronna McDaniel and Trump both went to a fundraising dinner at Mar-a-Lago on March 6, which brought in about 900 donors from all over the country. Donors there gave as much as $560,800. The money was to be divided among Trump’s reelection campaign, the RNC and various state Republican parties.

“That was the biggest event we’d seen for that,” said one top RNC donor on the condition of anonymity, adding that he is feeling fine but is nevertheless self-quarantining.

Brazil’s authoritarian president, Jair Bolsonaro, was at the event as well. The weekend also included a birthday party for Kimberly Guilfoyle, the girlfriend of Donald Trump Jr. and an adviser to the Trump Victory fundraising committee.

On Friday, donors who went to a brunch at Mar-a-Lago on Sunday, March 8, were notified that one person in attendance had tested positive.

McDaniel came down with “fever and flu-like symptoms” on Friday night, according to an RNC spokesperson. Her doctor in Michigan ordered a test for the virus, but the results are not yet known, the spokesperson said Monday.

Trump announced Saturday that he had been tested for coronavirus, and the White House said hours later that the test had come back negative.

Mar-a-Lago, which straddles the barrier island between the Intracoastal Waterway and the Atlantic Ocean, doubled its initiation fee from $100,000 to $200,000 right after Trump was elected president in 2016. Its profits flow to the Trump Organization, and then to a revocable trust Trump created just before entering office in 2017. He is the trust’s sole beneficiary.

The resort has charged Secret Service agents who must stay with Trump as much as $650 a night for rooms, according to The Washington Post.

Exactly how much the resort puts into Trump’s personal bank account, however, cannot be determined because he has refused to release his tax returns. His latest financial disclosure statement says he earned $22,692,146 from Mar-a-Lago in calendar year 2018, but Trump appears to conflate net profit with gross revenues, based on a HuffPost analysis of figures he has filed on the document compared to other official filings.