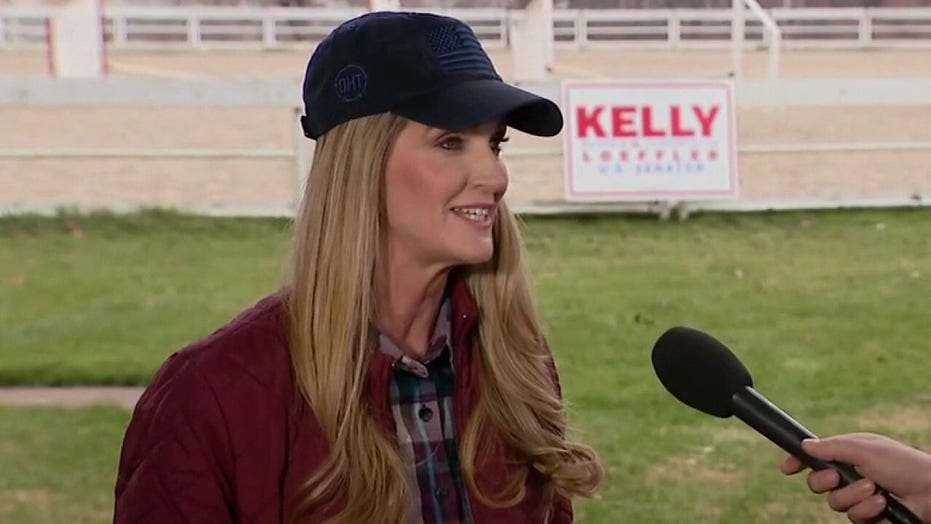 Sen. Kelly Loeffler blasted Jon Ossoff, who is challenging Sen. David Perdue in the other Georgia runoff, for falsely saying she was ‘campaigning with a Klansman,’ calling him a ‘trust fund socialist’ and ‘pathological liar.’

Sen. Kelly Loeffler, R-Ga., called Georgia Democratic Senate hopeful Jon Ossoff a "pathological liar" Thursday for his false claim she had "campaigned" with a member of the Ku Klux Klan.

"Georgia knows that Jon Ossoff is a pathological liar. He's a trust fund socialist whose only job has been working for the Chinese Communist Party in recent years," Loeffler told Fox News reporter Peter Doocy, referring to payments from a government-linked Hong Kong media conglomerate to Ossoff's media company, which he did not initially list on a financial disclosure form this year.

WARNOCK, OSSOFF LEVEL MISLEADING CLAIMS THAT LOEFFLER IS 'CAMPAIGNING WITH A KLANSMAN'

Ossoff, who is challenging Sen. David Perdue, R-Ga., in one of the two Georgia Senate runoffs, made the remark about Loeffler during an interview with Fox News on Tuesday, and he tweeted out the clip afterwards. It was viewed more than 5 million times as of Wednesday afternoon; however, as of Thursday evening, the tweet had been deleted.

"[Loeffler] is stooping to these vicious personal attacks [against Raphael Warnock] to distract from the fact that she’s been campaigning with a former member of the Ku Klux Klan," Ossoff said.

Ossoff's charge referred to a Dec. 13 photo Loeffler took at a campaign event with white supremacist Chester Doles, who spent time with the KKK and neo-Nazi National Alliance. Loeffler's campaign swiftly denounced Doles once his identity came to light, and the two did not campaign together.

"We kicked him out immediately … I had no idea who he was," Loeffler said on Wednesday. "I denounce that. I do not believe in it, and he has no place around our campaign."

Regarding Republican attacks against him over links to China, Ossoff told Fox News on Wednesday that his media company's past China ties did not demonstrate any influence by the country's Communist government over him.

Loeffler slammed her counterpart in the runoffs, Rev. Raphael Warnock, for the child abuse investigation into a camp he ran and what she called his anti-military and anti-police rhetoric. Warnock has also come under fire from Loeffler after Fox News reported on bodycam footage of his ex-wife telling police officers during a domestic dispute in March that he puts up a phony front to the public.

"We're the firewall to stopping socialism in America … We can lose America," she said. "That's what's at stake here."

The dueling Georgia runoffs will determine which party controls the U.S. Senate in 2021.

News broke shortly after Loeffler's interview that Perdue would go into quarantine after coming into close contact with someone who tested positive for COVID-19. The runoff elections take place Jan. 5, and record numbers of Georgians have already voted early.

When Elon Musk Shops for Groceries