Top Australian miner BHP’s chances of selling its carbon-intensive oil and gas assets to Perth-based Woodside Petroleum could have high hurdles to clear amid signs of significant investor opposition to a deal proceeding.

Following months of speculation, BHP on Monday confirmed it was reviewing the future of its global petroleum division, which spans Australia, the Americas and North Africa. One option under consideration was a merger of the division with Woodside through a distribution of Woodside shares to BHP shareholders. 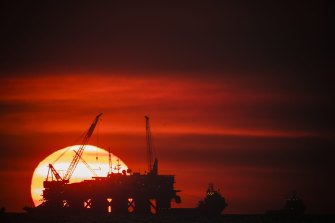 BHP, the country’s biggest miner, is in talks to sell its oil and gas division to Woodside Petroleum.Credit:Glenn Campbell

Selling out of oil and gas would mark the most significant shake-up of BHP’s portfolio in several years and an acceleration of chief executive Mike Henry’s retreat from planet-heating fossil fuels. The miner – whose top commodities are iron ore and copper – is facing mounting pressure from large investors and wider society to take greater action to decarbonise.

However, while the price of a would-be transaction remains unknown, a top Woodside shareholder has immediately expressed concerns about the Richard Goyder-led board overpaying and destroying value.

Allan Gray Australia, Woodside’s fourth-largest investor, said the mooted deal appeared a “bitter pill to swallow” and flagged its intention to vote against it unless the price was deemed compelling enough.

“There are a few issues, all of which culminate in our view that this is crazy from the perspective of Woodside shareholders,” Allan Gray chief investment officer Simon Mawhinney said.

“I shudder at the thought of what will come next.”

Mr Mawhinney said BHP’s oil and gas assets were mature, declining and faced imminent and onerous rehabilitation liabilities. It was also predominantly made up of oil – a fossil fuel considered more at risk from the clean energy shift. Woodside’s main commodity of liquefied natural gas (LNG), on the other hand, may have a brighter future, due to its potential role as a “transition fuel” supporting uptake of renewable energy as countries wean off coal, he said.

“I have grave concerns about Woodside shareholders being left holding the can, literally,” he said.

But the important question now for investors, he added, would “revolve around price and how Woodside could pay”.

The sale of BHP’s petroleum assets, which account for about 10 per cent of its core earnings, could fetch up to $20 billion, according to some estimates. BHP and Woodside are already joint-venture partners in two WA projects: the North West Shelf and the $16 billion Scarborough liquefied natural gas (LNG) project which they hope to green-light this year.

BHP also owns a 50 per cent interest in the ExxonMobil-operated Bass Strait oil and gas fields off Victoria, and oil and gas interests in the Gulf of Mexico, Trinidad and Tobago and Algeria.

For Woodside, acquiring BHP’s petroleum assets would retain the company’s position as Australia’s largest independent oil and gas producer after two of its ASX-listed rivals – Santos and Oil Search – agreed to a $22 billion merger earlier this month.

While discussions are ongoing and no deal yet reached, industry insiders anticipate further details to be made public within days when BHP and Woodside face investors to report their full-year profit results.

Since Mr Henry took the reins at BHP last year, the world’s biggest miner has been seeking to clean up its portfolio and image. BHP is in the process of quitting thermal coal, with NSW’s Mt Arthur mine its last remaining thermal asset, and is lifting exposure to so-called “future-facing” commodities copper and nickel that will be increasingly required to make electric batteries.

Credit Suisse, which has long-considered Woodside to be the most likely contender to buy BHP’s petroleum assets, said petroleum “simply no longer fits” within BHP’s portfolio.

“After having waited too long to divest thermal coal, and now having to resort to selling for cents on the dollar, BHP should know it’s better to exit petroleum sooner rather than later,” Mr Kavonic said.