Fifteen House lawmakers pushing for the Trump administration to throw oil a lifeline amid the coronavirus pandemic have received a collective $4.14 million from the fossil fuel industry over their careers.

They’re urging the reduction or elimination of royalties for offshore drilling operations ― payments that companies make to the federal government to extract oil and gas from public lands and waters. Drillers pay a percentage of the resource’s value, with the money going to fund schools, roads, conservation projects and more.

Offshore drillers pay a 12.5% royalty rate for leases in water depths of less than 200 meters. The rate for all other offshore leases is 18.75%.

Both an overseas price battle between Saudi Arabia and Russia and a steep decline in global demand due to the coronavirus outbreak have pummeled U.S. producers, sending prices to an 18-year low last week.

Late Friday, 13 Republicans and one Democrat, most from Texas and Louisiana, sent a letter to Interior Secretary David Bernhardt urging him to “examine the viability of a temporary reduction in royalties as domestic energy producers weather this combination of an [Organization of the Petroleum Exporting Countries]-driven price war and an epidemic that is driving millions of people around the world into quarantines of one kind or another.” Doing so, they added, “will help mitigate a price war that is sinking prices and decreasing production.”

More than one-fifth of the total $4.14 million in campaign donations ― nearly $900,000 ― has come in the 2020 election cycle. The data is from the Center for Responsive Politics, a nonprofit that compiles and tracks campaign donations.

The $4.14 million includes all fossil fuel money that the 14 members of Congress who signed the letter received, plus Rep. Garret Graves (R-La.), who last week told The Washington Examiner he also planned to ask the Interior Department to use its authorities to implement a short-term reduction in royalty rates for companies drilling on federal lands and waters.

More than half the total, nearly $2.4 million, came from fossil fuel industry political action committees, while the rest was from individuals, according to the Center for Responsive Politics data.

The oil and gas sector is a top-five contributing industry to all but two of the 15 lawmakers.

“These members’ choice to stand with Big Oil rather than the people suffering most from the COVID-19 outbreak is despicable,” Collin Rees, a senior campaigner at the environmental group Oil Change USA, said in an email Tuesday. He noted that the U.S. gives more than $20 billion in subsidies to oil, gas, and coal companies each year and that fossil fuel interests spend millions to get ally politicians elected.

“This is yet another damning example of the dirty energy money cycle at play, and the solution has to be a clear rejection of dirty money by our elected leaders,” he said. 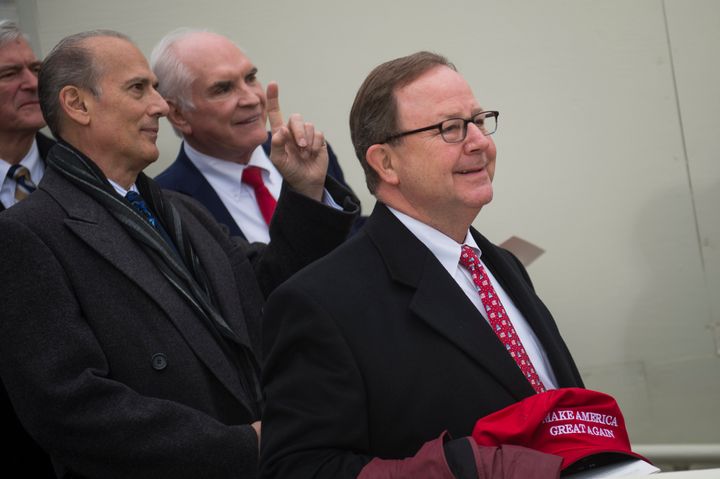 The largest chunk of the fossil fuel money went to Rep. Bill Flores (R-Texas), the former CEO of oil and gas company Phoenix Exploration. Over his five terms in Congress, Flores has raked in $1.17 million from the oil and gas sector, more than any other industry. That includes approximately $66,000 from Chevron, $59,000 from Energy Future Holdings LLC and $56,000 from Koch Industries, his top-three all-time contributors.

Below are the letter signatories and the amount they have fundraised from the fossil fuel industry over their careers:

Graves, who did not sign Friday’s letter to Bernhardt, has taken $615,835 in oil and gas money over his career in Congress, including $409,033 from industry PACs.

“It is in the national interest to sustain the oil and gas industry to fend off this economic warfare coming from nation-states and a decrease in demand globally because of coronavirus,” Graves told the Washington Examiner last week. “There needs to be a national response. We can’t just dump this all on the lap of industry.”

For the last three years, U.S. oil and gas producers have enjoyed an “energy dominance”-obsessed Trump administration that has propped up the industry at every turn by slashing environmental regulations, downplaying the threat of climate change and working to expand drilling on federal lands and in offshore waters. Now facing collapsing energy prices that risk bankrupting small producers, the industry has turned to the administration for financial relief to stay afloat.

The Trump administration has barreled forward with oil and gas lease sales on federal lands and vowed to purchase tens of millions of barrels of crude oil from U.S. producers, enough to fill the nation’s emergency reserve to capacity.

“We’re going to fill it right up to the top, saving the American taxpayer billions and billions of dollars, helping our oil industry and making us even further toward that wonderful goal, which we’ve achieved, which nobody thought was possible, of energy independence,” Trump said during a March 13 press conference.

It is unclear if the Interior Department is considering lawmakers’ request to cut royalties. The agency did not immediately respond to HuffPost’s request for comment Tuesday.