‘The Angle’ speaks to the first person sentenced for Jan 6 Capitol riots.

Rep. Adam Kinzinger, R-Ill., brushed off the possibility that he could lose his committee assignments if he goes against his fellow Republicans and joins Democrats’ Jan. 6 investigation.

“Who gives a s–t?” Kinzinger told Politico on Thursday.

“I do think the threat of removing committees is ironic, because you won’t go after the space lasers and White supremacist people but those who tell the truth,” he continued, appearing to reference Rep. Marjorie Taylor Greene, R-Ga., who posted on Facebook in 2018 about “lasers or blue beams of light” run by secret elites starting the California wildfires.

Kinzinger did not tell Politico whether he’d serve on the committee but said “we’ll see how this whole thing shakes out.”

“Today, I voted in support of the Select Committee (H.Res.503) because the truth matters,” Kinzinger said in a statement on Monday. “Because it is our duty to conduct a thorough investigation of this most egregious attack on the Capitol. Because the American people – and especially the families of our brave law enforcement on the front lines that day – deserve answers.”

“We’re very honored and proud that she has agreed to serve on the committee,” Pelosi said Thursday in announcing Cheney’s appointment.

Cheney, already ousted from GOP House leadership for routinely blaming former President Donald Trump for sparking the attack, joined with all Democrats Wednesday to vote in favor of forming the committee along with Kinzinger.

House Minority Leader Kevin McCarthy, R-Calif., has yet to announce whether he’ll make his designated five GOP appointments to the committee or withhold membership altogether.

McCarthy said he’s “not threatening anybody” with committee removal, but pointed out that Cheney broke tradition by seeking a committee assignment from the speaker when committee membership is decided by the leadership of a rep’s own party.

“For somebody to accept committee assignments from Speaker Pelosi – that’s unprecedented,” McCarthy said Thursday of his former conference chairwoman.

He suggested that by accepting a committee assignment from the opposing party a Republican should no longer “expect” to have committee slots from their own party. Cheney currently sits on the powerful House Armed Services Committee. 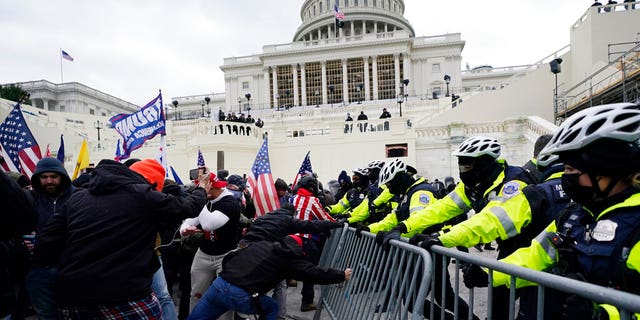 In this Wednesday, Jan. 6, 2021 file photo, Trump supporters try to break through a police barrier at the Capitol in Washington. (AP Photo/Julio Cortez, File)

In June, Pelosi said she hoped the 9/11-style commission would become a reality, but after Senate Republicans blocked its creation, she could not wait any longer to launch a deeper dive into the events surrounding the takeover of the Capitol. She created a House committee to investigate the origins of the attack and make recommendations on how to prevent a future riot.

Pelosi said the body will dig into the root causes of the attack, including White supremacy, and the security issues at the Capitol. She didn’t establish a time frame for results and said the committee will investigate “as long as it takes.”

The House already passed legislation on May 19 to form an independent panel to investigate the attack with support from 35 Republicans, despite opposition from Trump and McCarthy. But the effort failed in the Senate on May 28, with Senate Minority Leader Mitch McConnell, R-Ky., leading a legislative filibuster to block consideration of the commission.

On Jan. 6, a mob broke down barricades and stormed the U.S. Capitol in an effort to stop the congressional certification of President Biden’s Electoral College win as Trump claimed the 2020 election was stolen from him. Lawmakers had to be evacuated from the chambers and take shelter as the intruders were calling for the killing of Pelosi and then-Vice President Mike Pence. About 140 police officers were injured in the riot.

Seven people died during and after the rioting, including Ashli Babbitt, who was shot and killed that day while trying to break into the House chamber, three others who died of medical emergencies and two police officers who died by suicide in the days that followed. A third officer, Capitol Police Officer Brian Sicknick, collapsed and later died after engaging with the protesters, but a medical examiner determined he died of natural causes.

Fox News’ inquiries to Kinzinger’s and McCarthy’s offices were not immediately returned.

Fox News’ Marisa Schultz and the Associated Press contributed to this report.