Former Vice President Joe Biden scored another batch of primary victories on Tuesday, adding to his delegate lead and taking one more step toward the Democratic presidential nomination.

Biden won by a landslide in Mississippi, Missouri, and Michigan, according to cable network projections, putting on another commanding performance after his decisive wins in last week’s Super Tuesday contests. He’s also expected to do well in Idaho, North Dakota, and Washington state, where polls close later on Tuesday.

At a campaign appearance in Detroit on Monday, Biden projected party unity by rallying with Sens. Kamala Harris of California and Cory Booker of New Jersey, two former rivals for the Democratic nomination who endorsed Biden over the weekend, as well as Michigan Gov. Gretchen Whitmer. 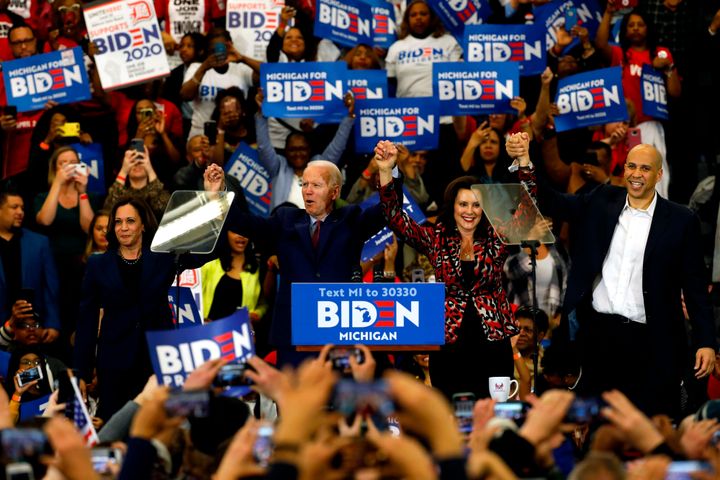 Black voters played a huge role in resuscitating Biden’s campaign, which struggled early last month after disappointing finishes in Iowa and New Hampshire. The trend continued on Tuesday: Biden won 84% of Black voters in Mississippi compared to Sanders’ 13%, per an early exit poll released by CNN.

Michigan, in particular, was seen as a pivotal state for Sanders’ campaign. A surprise win there could have at least reversed the narrative that the race was functionally over, even if Sanders had committed to staying in until the Democratic convention. The Vermont senator upset Hillary Clinton in the Great Lakes State in the 2016 Democratic primary, so he was a known commodity there. He focused heavily on the state in the past week, holding several huge rallies in Detroit and the college town of Ann Arbor.

But Sanders was no match for Biden in Michigan’s suburban and rural areas, particularly with white working-class workers there who also backed the former vice president in other primaries across the country.

The map looks even more daunting for Sanders later this month when voters in Arizona, Florida, Illinois, Ohio (on March 17) and then Georgia (on March 24) head to the polls. Many of the same dynamics apply in these states. In Florida, for example, where 219 pledged delegates are up for grabs, Biden leads Sanders 61% to 12%, according to a recent poll.

Tuesday’s elections were overshadowed somewhat by the growing coronavirus outbreak. Both presidential candidates canceled their scheduled events in Ohio earlier in the day after state officials warned people about congregating in large events. Biden is scheduled to address the election results and the outbreak from Philadelphia. Sanders, meanwhile, will be in his home state of Vermont.