Home » World News » ‘It is massive’: US ban on European travellers could sink airlines

‘It is massive’: US ban on European travellers could sink airlines

US President Donald Trump's unexpected ban on most travel from Europe to the US could send some foreign airlines out of business and prompt the biggest reduction to international air travel in decades, according to a respected aviation expert.

"It is massive. This is the biggest, most valuable international route group in the world," said Peter Harbison from the CAPA Centre for Aviation.

"As a route, the North Atlantic, it's by far the biggest and most valuable. And that means valuable to commerce but also valuable to the airlines themselves. Because a lot of the travel is business travel, corporate travel and therefore high-yielding," he said. 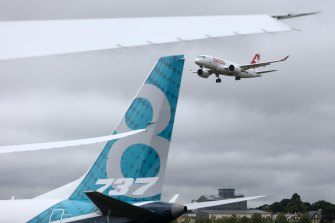 IATA warned coronavirus could wipe $US113 billion ($171 billion) in revenue from the aviation sector this year. That was before the US travel ban.Credit:Bloomberg

Mr Harbison said the ban, which will last for 30 days from midnight Friday (American time), came at a time when travel was already down significantly.

"This is not a peak period, but you're taking away essentially at least half of their traffic if, for all intents and purposes, you're only allowing Americans to fly," he said.

Australian Government health experts were asked to review travel between Europe and Australia following the US announcement. Health Minister Greg Hunt said the review was being done out of "an abundance of caution".

While the viability of some foreign airlines would be at risk because of the US ban, Mr Harbison said it was likely that governments would respond to the risks.

"Inevitably governments will, selectively, be helping bail some of the airlines out. Because these things are too important to their economies to lose them," he said.

The US ban, announced by President Donald Trump in a televised address from the Oval Office in the White House, is the latest setback for an aviation industry already facing a downturn in travel because of the coronavirus.

Companies around the world are slashing their travel in order to keep their workers safe, while holidaymakers are postponing and cancelling holiday makers because of fears over coronavirus.

The International Air Transport Association (IATA) last week warned that the coronavirus pandemic could slash the revenue of airlines by a massive $170 billion this year.

"In little over two months, the industry's prospects in much of the world have taken a dramatic turn for the worse," IATA president Alexandre de Juniac said.

Mr Trump said US restrictions on people coming from China and other countries with early outbreaks of COVID-19 had held down the number of cases in the US compared with Europe. He also criticised the European Union for failing to immediately stop travel from China "and other hot spots" which he said had led to clusters of outbreaks in the US.

"I have decided to take several strong but necessary actions to protect the health and well-being of all Americans. To keep new cases from entering our shores, we will be suspending all travel from Europe to the United States for the next 30 days," Mr Trump said.

US Homeland Security officials later clarified that the restrictions would apply only to most foreign nationals who have been in the 26-nation Schengen area of Europe in the 14 days before their scheduled arrival in the United States. The Schengen countries, which do not restrict travel among them, include Germany, France, Italy, Spain, Netherlands, Sweden, Austria and others.

It does not include Britain and Ireland

Mr Harbison said the US ban would affect only a very small number of Australian travellers, and have very little if any impact on Australian airlines.

"The direct impact for Australian travellers is very small," he said, adding that only a "very small number" of Australians flew from Europe to the US at any given time.

Australians can still fly between the United Kingdom and the US, and between Europe and Canada.

"And it has next to no impact on the airlines themselves, Australian airlines. First of all they don't fly that route themselves, with their own metal," he said.