Home » World News » Ingraham: 'Sanctimonious snitches' turning Americans against each other in age of COVID, Biden

Ingraham: 'Sanctimonious snitches' turning Americans against each other in age of COVID, Biden 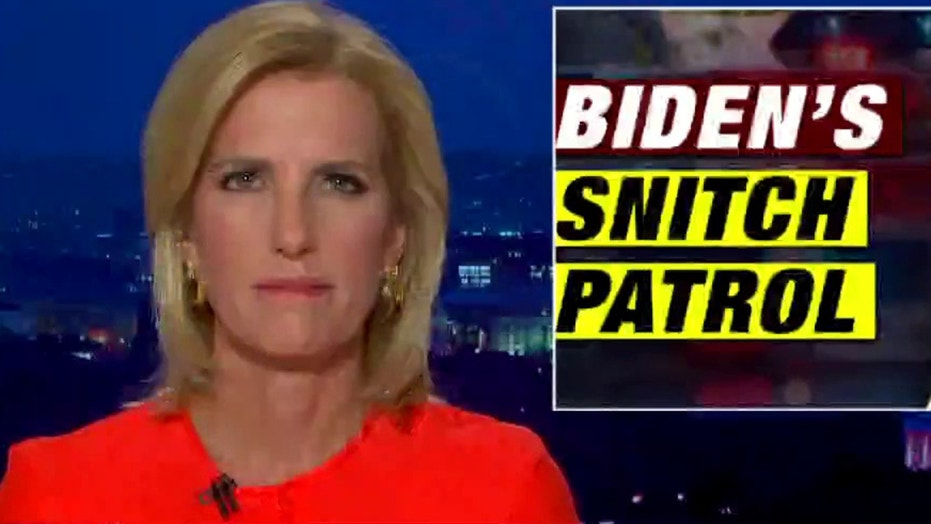 The coronavirus pandemic and the election of Joe Biden as president has given rise to a “busybody phenomenon” across America, “courtesy of unhinged progressives who are happiest when they’re ordering someone else around,” Laura Ingraham told viewers Tuesday.

“The Ingraham Angle” host cited examples of the busybody phenomenon as varied as TV hosts freaking out about revelers celebrating the Tampa Bay Buccaneers Super Bowl win, and Los Angeles Mayor Eric Garcetti encouraging citizens to report violations of the city’s stay-at-home order with the phrase “snitches get rewards”.

“Now, this is funny in one way, but it’s pernicious stuff and it’s infected every level of our society,” said Ingraham, who posited that “90% of the sanctimonious snitches are just frustrated, bitter lefties with too much time on their hands.”

But with Biden in office, she added, “the snitches are even more emboldened.”

Ingraham went on to proclaim that “these seething snitches have more in common with the old-fashioned Soviet thought police than they have with the free speech liberals of the 1970s” and noted that the left is using what she called the “snitch and ditch culture” to divide families.

She referenced the case of a Massachusetts teen who called out her mother for being present at the Jan. 6 Capitol riot and “has since raised $74,000 for college on a GoFundMe page since tweeting about Mommy. I guess it beats babysitting or waiting tables to pay for tuition.

“Liberal busybodies claim that they’re just trying to save lives with their snitching, but we know that’s not true,” Ingraham concluded. “They’re silent when blue state mayors and governors are caught violating their own COVID dictates, and they made excuses when entire city blocks were in flames last summer because of the BLM riots. They’re complete frauds.

“This is not about standing on principle. Snitches want riches and of course, they want power. Their political overlords and the Biden administration themselves are masters of snitching … That’s an entire job description for Anthony Fauci, shaming America for wanting to go back to normal, but it’s time to shame them right back for turning Americans against Americans.”