A scooter or motorcycle struck Banes while she was crossing a street on June 4. The “Gone Girl” actress died Monday at Mount Sinai Morningside Hospital, a police department spokesperson said.

The New York City mayor said the Big Apple is “in the process of continuing to work out those regulations.” 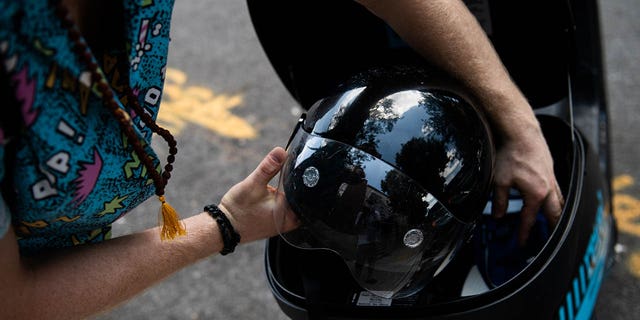 A commuter places a helmet back in the storage compartment of a Revel Transit Inc. electric ride share moped in the Williamsburg neighborhood of the Brooklyn borough of New York. (Photographer: Mark Kauzlarich/Bloomberg via Getty Images)

“It’s always going to be a combination of regulation, education, enforcement, and pushing really hard to get these pieces right to keep everyone safe,” he said. “And if for some reason we need new laws or different regulations, we got to keep doing that, but it’s a tough situation. It’s the most crowded place … certainly in the country, and we’re throwing these new elements in, and we have to be really smart about it.”

He repeated the message that “education, enforcement, and continuing to refine the regulations” will help the issue.

A representative for Banes confirmed the actress’s death to Fox News in a Monday statement.

“We are heartsick over Lisa’s tragic and senseless passing. She was a woman of great spirit, kindness and generosity and dedicated to her work, whether on stage or in front of a camera and even more so to her wife, family and friends. We were blessed to have had her in our lives,” Banes’ rep, David Williams, said.

Williams previously shared that Banes was hit as she was crossing Amsterdam Avenue on the way to visit the Juilliard School, her alma mater. She was taken to a local hospital where she was listed “in critical condition.”